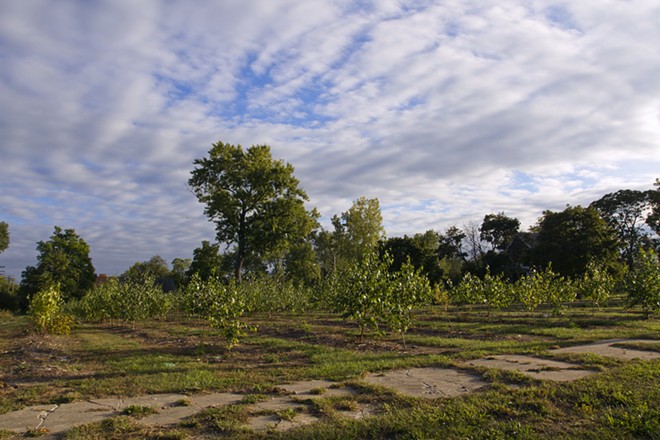 Nearly a decade ago, when Hantz Farms was asking the Detroit City Council for approval to buy more than 1,500 parcels of blighted land for an urban tree farm on the city’s lower east side, critics blasted the project as a land grab.

At $350 per parcel, the deal was a virtual giveaway with no long-term guarantees. To temper criticism, John Hantz, the wealthy entrepreneur behind the project, insisted he did not plan to sell large chunks of land for profit, at least not in the short-term. It was all about cleaning up blight and growing trees.

Despite the controversy, council members narrowly approved the deal in October 2013, and over the past decade, abandoned parcels were slowly converted into tree farms in an area bounded by East Jefferson, Mack, St. Jean and Van Dyke.

But since 2019, Hantz has sold 147 properties for an estimated $2.8 million, according to Crain’s Detroit Business. Of those, 37 parcels were sold to the Detroit Brownfield Redevelopment Authority as part of a land swap to make way for a new Fiat Chrysler Automobiles assembly plant, and the remaining 110 properties went to commercial and real estate developers.

While Hantz still owns more than 90% of the land, the sale of nearly 150 properties suggests that his critics were at least partly right. What was portrayed as the nation’s largest urban farm experiment is beginning to look more like the stage of a mass real estate sale.

Hantz also never followed through on a pledge to create plenty of new jobs with “reasonable salaries and benefits.” In May 2014, more than 1,000 people helped plant oak trees on 20 acres, but only a handful were compensated employees. Almost everyone was an unpaid volunteer.

To Hantz’s credit, his team has demolished dozens of homes and cleaned up a largely abandoned area that was littered with trash, tires, furniture, rotting homes, dead trees and discarded boats.

At the time, Mayor Dave Bing said the goal was to remove blight.

“The sale will result in the elimination of blight — debris, illegal dumping, and vacant structures — on a large parcel of east side property,” Bing said in 2012.

Were the critics right? Only time will tell.