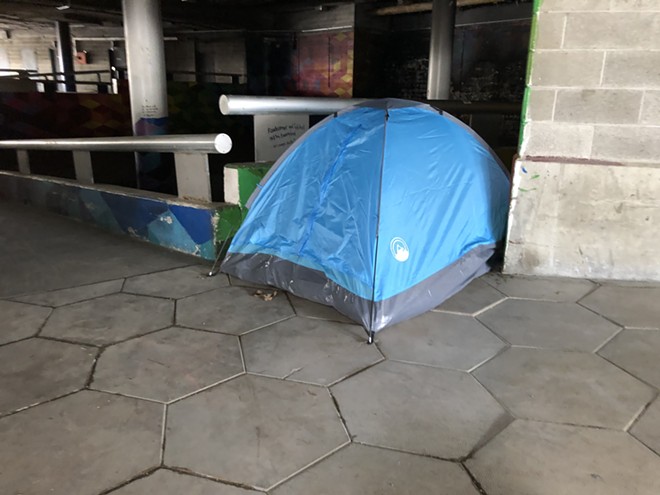 Lee DeVito
A tent in the underground part of Detroit's Hart Plaza.

The city of Detroit is temporarily clearing out a homeless encampment at Hart Plaza, spurring concerns among social workers and activists about the fate of the people residing in the downtown park.

The city is embarking on a $2.9 million renovation project to address unsafe conditions at Hart Plaza beginning Monday. While crews perform the work, which is expected to be finished by the end of August, city officials say they are providing temporary housing that adheres to COVID-19 guidelines.

“As with any construction project, it would be unsafe to have civilians within the worksite,” Donald Rencher, group executive for the city’s Housing and Revitalization Department (HRD), tells Metro Times. “Homeless service agencies will provide case management and connection to permanent housing so that individuals do not end up back on the streets. It is extremely important that Detroiters know that we deeply care about our residents experiencing homelessness.”

Worried about the displacement of unhoused people, social justice activists, social workers, and others are planning a rally at Hart Plaza at 7 a.m. Monday.

The city of Detroit will be clearing out a homeless encampment at Hart Plaza on April 26th at 8am.

We will be providing aid and support to these folks and standing in solidarity with them peacefully.

Please come out to provide support and demand that the sweeps end. pic.twitter.com/bKcb0jUDa7


“This will be a peaceful gathering,” Kara Mason, of Eastside Mutual Aid, a progressive movement dedicated to creating a self-sufficient, empathetic, and educated community, tells Metro Times. “We don’t want to bring any more pain and suffering” to the people camped there.

Social workers and other advocates say the encampment is an important location for people experiencing homelessness. It’s underground, close to resources, and is a relatively safe alternative to shelters, which often are full and can be dangerous for women and transgender people.

“People go to Hart Plaza because they feel safe and protected,” Jewan Price, of Eastside Mutual Aid, says. “There is a community there, and that community should be recognized, and people should realize these are valid people who are there for valid reasons.”

About 10,000 people are homeless in the city, according to the Detroit Continuum of Care. Rencher says homelessness has declined by 24% between 2018 and 2020 as the city continues to focus on providing permanent housing. 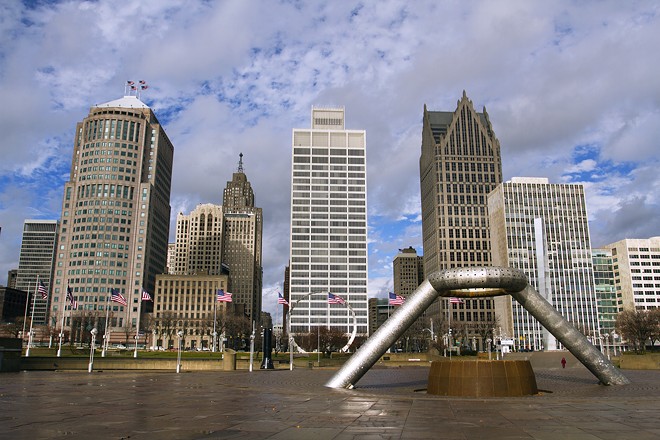 Steve Neavling
Hart Plaza in downtown Detroit.
In many large cities, homeless encampments are flashpoints of contention as conflicts arise over the rights to public space and the competing interests of housed and unhoused people.

In Los Angeles, protests broke out last month after the city moved to evict a large homeless encampment from a major city park. A federal judge this week criticized the city for its handling of the encampment and ordered officials to find shelter for all of the unhoused residents within 180 days.

In Baltimore, Mayor Brandon Scott recently said he plans to purchase hotels to provide housing to people experiencing homelessness. To prevent the spread of COVID-19, the city has offered housing to hundreds of homeless residents in hotels.

Mason says Detroit must address the root causes of homelessness.

“Homelessness is a sign of a failed government,” Mason says. “It’s a sign of a system failure. We have more empty houses than we have homeless people. We are giving plenty of money to police and other organizations instead of putting it into the actual community and creating an empathetic and educated community.”

The city came under fire in the winter of 2019 after police wiped out homeless encampments in Hart Plaza and beneath an overpass near the Joe Louis Arena, where police seized sleeping bags, tents, coats, hats, shoes, gloves, and anything else found in the encampments. City officials said the encampments were unsanitary and attracted rats and that the people were given ample warnings.

Rencher says the city is improving its handling of people experiencing homelessness by providing permanent solutions and working with service providers.

“The city’s policy is to not remove people’s personal items,” Rencher says. “There have been, however, times the city has discarded items if the items pose a public health risk, like having urine, feces, rats, or items that can drift into high traffic areas. When these conditions become known, HRD works with our local outreach teams to inform individuals of the scheduled cleaning so items in sanitary condition can be stored upon the resident's request. This detailed level of coordination between city contractors and departments, and outreach teams is still in its infancy stages, but we firmly believe that all city residents must be treated with the same level of respect and dignity.”