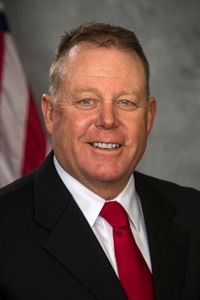 Kalamazoo County
Zach Lahring.
The Michigan Bureau of Elections issued a formal warning to a Muskegon County commissioner for wearing a Trump 2020 hat during a public meeting in 2019.

The Bureau of Elections received a complaint that Commissioner Zach Lahring displayed a “Trump 2020” hat on his county desk during a public meeting in October 2019 before donning the cap.

“Any piece of clothing that bears the name of a candidate for office inherently expresses support for (or opposition to) that candidate,” Adam Fracassi, an election law specialist at the Bureau of elections, wrote in a letter on Feb. 26. “When such clothing is worn at a public meeting by a public official attending in his or her official capacity, the messages communicated by the official’s apparel become messages communicated in the official’s public capacity."

Lahring contended he did not violate the Michigan Campaign Finance Act because he did not intend to “assist in the reelection of President Trump during board meetings.”

The bureau disagreed, saying the hat “constituted a campaign statement in favor of a candidate during official duties.”