Republicans are clashing over control of the local GOP, holding competing conventions 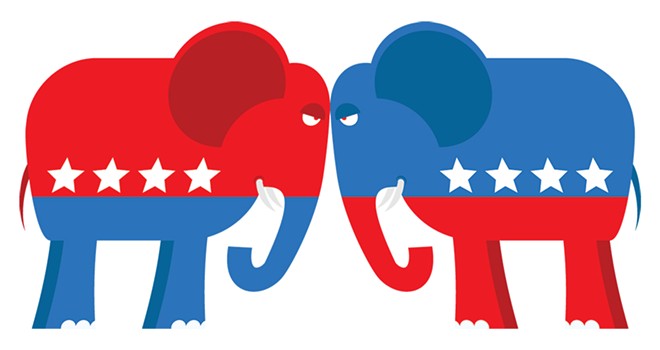 The Macomb County GOP is embroiled in an ugly internal dispute over control of the party, and now plans to hold competing county conventions Thursday evening.

With less than three months before the general election, the battle is likely to play out in court and have far-reaching consequences for a party that is trying to maintain control of the Michigan Legislature and regain the positions of governor, attorney general, and secretary of state.

Macomb County, the third largest county in the state and a onetime Democratic stronghold, is now Michigan’s largest Republican-dominated county and is credited with delivering Trump his election victory here in 2016.

At Thursday’s convention, delegates will be selected to officially nominate the Republican candidates for attorney general, secretary of state, lieutenant governor, and other statewide positions.

During a chaotic convention in April, the party ousted its chairman Mark Forton and replaced him with Eric Castiglia, who seized control of the party’s executive committee.

But on Aug. 5, Macomb County Circuit Court Judge Matthew Sabaugh ruled that Forton is the rightful leader because Castiglia’s supporters had violated bylaws by removing Forton without a formal trial.

Despite the judge’s order, a defiant Castiglia, backed by the Michigan GOP, scheduled Thursday’s county convention for 7 p.m. at the Royalty House in Warren, where Republicans are tasked with picking delegates for the Aug. 27 state convention.

Both leaders have instructed delegates to attend their respective conventions.

On Wednesday, Forton’s lawyer Daniel Hartman alleged in a court filing that Castiglia is in contempt of court for holding his own convention.

“I have seldom seen a more brazen disregard for the authority of a court in my 26-year legal career,” Hartman wrote in the filing.

“I have received many texts, emails, and social media message that delegates are confused and feel as though they will be ineligible to attend the state convention if they attend the convention called by Mark Forton,” Hartman wrote.

“State Law and the Convention Rules require the County Chairman to call and convene the county convention by acting as the temporary chair of the committee,” he added.

Leadership of the Michigan Republican Party has sided with Castiglia after clashes with Forton, a Trump loyalist who has clashed with other Republicans for not fully backing the former president and the politicians he has endorsed.

In an email to precinct delegates Tuesday, Michigan Republican Party Chairman Ron Weiser advised delegates to attend Castiglia’s convention at 7 p.m. at the Royalty House in Warren, making no mention of the court order.

“The Michigan Republican Party recognizes Eric Castiglia as County Chairman in Macomb County,” Weiser wrote. “Any Precinct Delegate who wishes to attend State Convention must either attend that convention or send notice to Mr. Castiglia of their desire to attend.”

Responding to the email, Jazmine Early, a Sterling Heights Republican delegate, slammed Weiser, saying he was being “shameful and disrespectful.”

“It shows that you don't have appreciation for the Rule of Law, and neither for standing for what is legally right,” Early wrote. “I never thought that I will come to this country to face what people think that only happens in third world countries. And because my love for this country goes far beyond politics, I will stand with the people that I represent. And in support of the official leader of the Macomb County Party, Mark Forton, as a leader in Macomb county we will stand for what is right. We will go to the Shelby Township convention, and so help us God.”

Mark Koroi, a Republican delegate in Macomb County, said he’s disappointed with the infighting and doesn’t know how the competing conventions will play out.

“The consensus appears to be that the state party is going to accept the Castiglia delegates from the Royalty House — even though the Judge appeared to say that Castiglia should not be credentialing delegates,” Koroi tells Metro Times in an email. “Purists say Forton won the court action and he is the true leader.”

After primarily electing Democrats for decades, Macomb has more Republican voters than any other county in Michigan, eclipsing its affluent neighbor, Oakland County, a longtime GOP stronghold that now leans Democratic. It has even surpassed Kent County, home of Grand Rapids and GOP megadonors like Dick and Betsy DeVos.

With 9% of the state's population, Macomb County has become a potent conservative enclave of disgruntled white, working-class voters who are steadfast in keeping Trumpism alive.

The hard pull to the right has ushered in a new generation of elected Republicans who are adopting Trump's combative, fear-mongering rhetoric, fanning conspiracy theories, downplaying COVID-19, spreading misinformation about vaccines, disregarding rules, and embodying an anti-establishment, populist sentiment.