As Ford buys Michigan Central Station, a look back at its former owner's track record 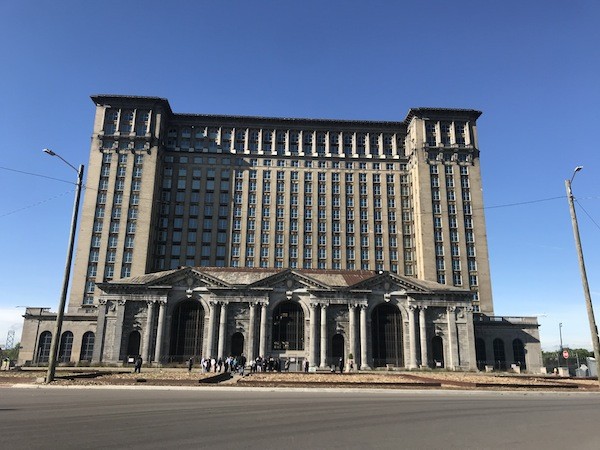 When you're an 104-year-old building, getting a new owner can mean many things, ranging from a new lease on life to a total teardown. But the news this morning that Ford Motor Company will become the new owner of Michigan Central Station was delivered with such fanfare, you almost begin to believe the hype, that better days await the 1914 beaux arts hulk.

The building has always attracted people's attention. It's a building from that awkward adolescence of the American skyscraper, when architects could build upward as never before, and yet hadn't developed the glass-and-steel modernism of, say, the 1950s. Out-of-towners are instinctively drawn to the building, including the official cultural historian of Chicago, Tim Samuelson, whom we once interviewed about the building's design.

Of course, the building has been closed since the late 1980s, and most of the people who've seen the interior have been trespassers. Since then, it's been in the sort of development limbo normally cultivated for buildings like Hudson's Department Store. Initially, city fathers had kicked around the idea of it being a trade center. As recently as 2003, Detroit Mayor Kwame Kilpatrick had a press conference announcing that the building would be the new headquarters of the Detroit Police Department.

But behind all the plans, proposals, and pressers, the Moroun family has owned the building since 1995. Given the building's strategic location next to the international train tunnels, it only made sense that the same family that owned the Ambassador Bridge would also acquire the property. A 2002 proposal to turn one of the rail tunnels to Canada behind the station into a trucking tunnel never got started; if it had, the builders might have had a hard time finding a staging area.

Many prominent voices have demanded the building's destruction down the years. As recently as several weeks ago, Nolan Finley of The Detroit News expressed his hopes that the building would be razed. And yet he has been in good company. One of the main obstacles to the demolition is the fact that buildings of the 1910s have a reputation for being over-engineered. Tearing down a building like Michigan Central Station would be extremely expensive.

And yet the Morouns' ownership likely helped save the building too. Not because the building was cared for; it wasn't. Not because Roosevelt Park was improved by the Morouns; the most visible improvements to the park seem to have been done by area residents. No, the fact that the station stands is probably due to the way that city politicians had passed a resolution in 2009 requesting that the building be demolished and that the Morouns get stuck with the bill. Not in this town. Our oligarchs are able to leave their buildings open to the elements as long as they damn well please, thankyouverymuch. As for billing them for the demolition, they're probably still laughing about that over at CenTra, Inc.

And then something happened about five years ago. Maybe it was the roses being thrown at the feet of fellow billionaire Dan Gilbert. Maybe it was the two decades' worth of glowing headlines the Ilitch family has received for renovating the Fox Theatre all those years ago. All of a sudden, the Moroun family began to appear to care what everyday Detroiters thought of them. All of a sudden, as if the Morouns had dialed 1-800-HANSONS, windows began to appear in the train station. Three years ago, the younger Moroun embarked on a sort of "charm offensive," in which Matthew Moroun labored to explain that his family's track record was actually pretty good.

Now the family comes forward as dealmaker, presenting the sale to Ford Motor Company as a fait accompli. Only in Detroit could the scion of a billionaire family describe unloading a building too expensive to overhaul onto another company with more vision as "the grand development I was looking for." Imagine somebody flipping a house, selling it to a buyer, and crowing about a "golden opportunity for its rebirth," or "the American second chance."

Ford, of course, has a checkered history as a developer in Detroit, having taken a good soaking just 40 years ago on another "rebirth" — the Renaissance Center. Ford, many will recall, invested hundreds of millions of dollars into the project, which went into default in 1983. By 1996, as The New York Times noted, "G.M. paid just $73 million for the steel and glass complex, which cost Ford and its other investors $350 million to build in the late 1970s."