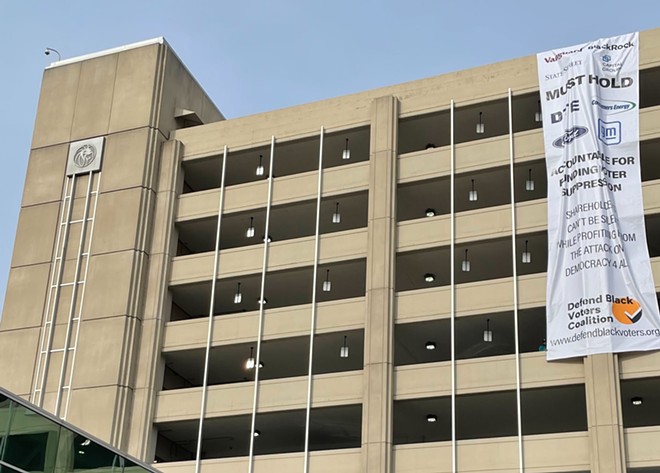 A coalition of voting rights advocates unfurled a large banner outside of DTE Energy's headquarters in Detroit on Thursday morning, calling on large Michigan-based companies to stop funding the campaigns of politicians who attack democracy.

“Shareholders can’t be silent while profiting from the attack on democracy 4 all,” states the banner, which was draped along the side of MGM Grand casino’s parking structure during DTE's annual shareholder meeting.

The Defend Black Voters Coalition, a multi-racial group that supports voting rights, is urging shareholders of DTE, General Motors, Consumers Energy, and Ford Motor Co. to hold the companies accountable for donating to politicians who are behind initiatives to restrict voting rights.

“We demand the boards of directors of GM, Ford, DTE, and Consumers Energy meet with directly impacted people in Detroit to understand the harm their companies are doing to our communities,” Jennifer Disla, co-executive director of Detroit Action, said in a statement. "It’s past time we defend our communities from the racist policies set forth by corporations and right-wing politicians. It’s time for all of us to defend Black voters.”

In April 2021, the leaders of three dozen major Michigan-based companies denounced a package of Republican-sponsored bills that would curb voting access in Michigan and other states. But since then, some of the companies have resumed funding the campaigns of Republicans responsible for bills that would make it more difficult to vote.

Republicans in the state Legislature introduced a 39-bill package last year that would restricting voting rights. The bills come amid false and discredited claims of widespread voter fraud in the 2020 election, when a record number of people voted.

The legislation in Michigan would require a photo ID to vote in person, prohibit clerks from providing prepaid postage on absentee ballot return envelopes, and restrict the hours to drop ballots in curbside boxes. The Secretary of State would be prevented from mailing unsolicited absentee ballot applications, as done in 2020, and voters would have to attach a copy of their photo ID to apply for an absentee ballot.