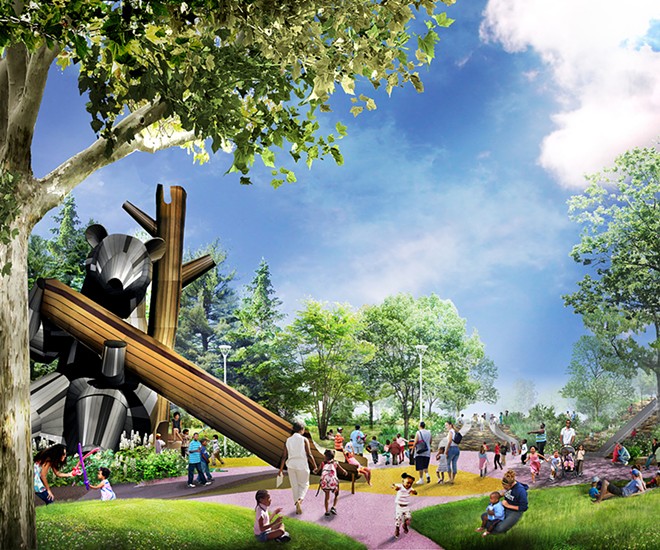 The 22-acre park was first announced back in 2018 and is expected to open in 2024. It will replace the West Riverfront Park at West Jefferson Avenue and Rosa Parks Boulevard and feature a playground, a "Water Wonderland," sports house, and a huge lawn for outdoor events called the DTE Foundation Hill.

Most importantly, in our humble opinion, are the giant bear and otter-shaped slides that will be located at the park’s Delta Dental play garden.

Delta Dental of Michigan donated $5 million for the animal-themed playground, which will also include play equipment shaped like a beaver. We can’t promise we won’t head straight for the 20-foot bear slide when the park finally opens. Sorry kids, you’ll have to wait your turn.

Meanwhile, plans for the park’s William Davidson Sport House include a multi-use space with a raised canopy and skylight for a range of programs and events. 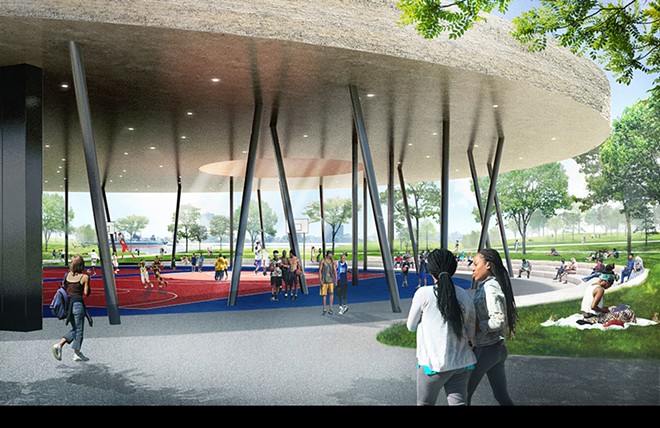 The total project, which costs about $75 million, is named after Detroit philanthropist and entrepreneur Ralph C. Wilson Jr. His organization, the Ralph C. Wilson Jr. Foundation, gave the city a $40 million capital investment and a $10 million endowment for the park’s completion back in 2019.

The foundation also provided additional funds to help with key connections to the park between the East Riverfront, West Riverfront, and beyond with the addition of the new Southwest Greenway.

“We have known for years that this part of the riverfront had tremendous potential, and the Ralph C. Wilson, Jr. Foundation encouraged us to dream big,” said Matt Cullen, chairman of the Detroit Riverfront Conservancy. “Parks like this only happen once in a lifetime. Ralph Wilson Park will rank among the best parks in the country and have a profound impact on neighborhoods, and generations of Detroiters will gather together here and make memories that last a lifetime.”

Duggan said that 20 years ago nobody would have believed that Detroit’s riverfront, “with its cement silos and parking lots, would become one of the most beautiful and accessible waterfronts in the country.”

“But through the work of the Detroit Riverfront Conservancy, city government, and countless partners, that's exactly what we have,” he said. “In just a couple of years, our riverfront will achieve true world-class status when the new Ralph C. Wilson, Jr. Centennial Park opens with its incredible amenities and physical features. Even better is the fact that it will connect to the Joe Louis Greenway, giving residents in neighborhoods across the city direct access to this extraordinary new park. Detroit is so fortunate to have been the beneficiary of this incredible gift from the Ralph C. Wilson, Jr. Foundation.”

He’s not wrong about it being one of the most beautiful waterfronts in the country. The Detroit Riverwalk was voted "Best Riverwalk in America" by USA Today readers in 2021 and 2022.

The Detroit Riverfront Conservancy also received $7 million in donations from other philanthropist groups for the park. For the DTE Foundation Hill, which will host concerts, outdoor fitness classes, and sledding in the winter, the DTE Energy Foundation gave the conservancy an additional $2.5 million donation.

The project is one more step in completing Detroit’s 5.5-mile riverwalk, which still has about two miles that remain unfinished.