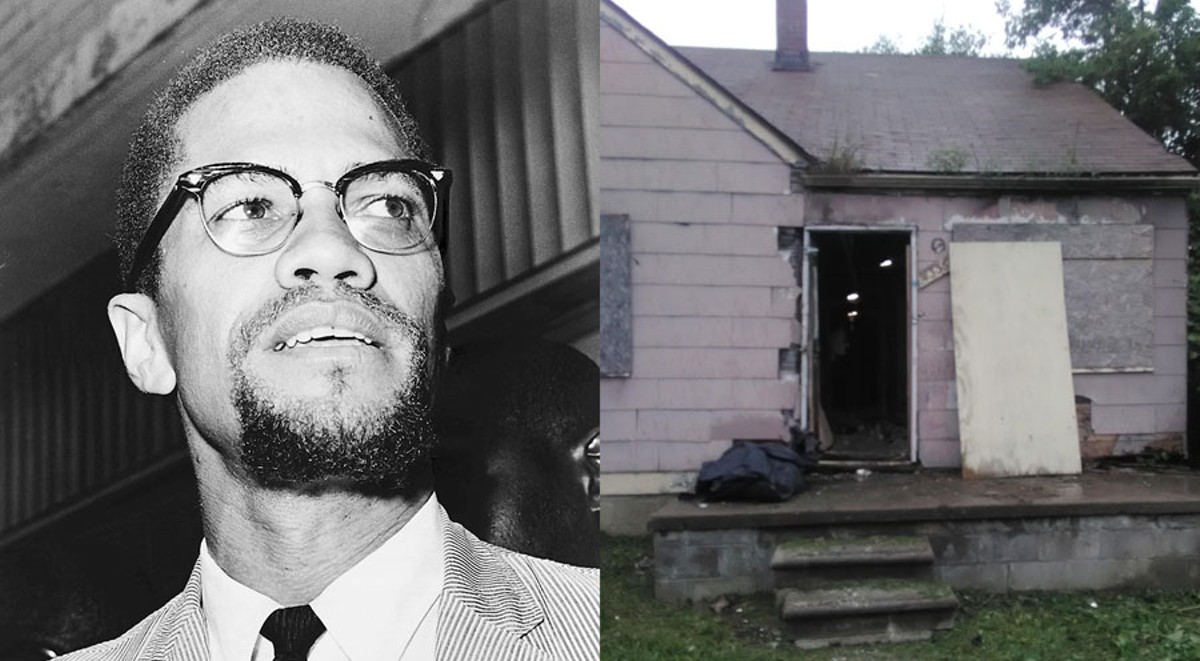 It's just a small, fire-damaged, wood-frame house at 4336 Williams St. in Inkster. It was a forgotten place surrounded by overgrown vegetation. In many cases it would be on somebody's list for demolition.

Not in this case.

The less-than-modest edifice was once owned by Wilfred Little, the brother of the revolutionary minister Malcolm X. In fact, Malcolm X lived in his brother's house or visited there on and off starting in 1953 when he was assigned as assistant minister at Temple No. 1 in Detroit until his death in 1965. Inkster framed Malcolm X's public ministry, serving as his home shortly after his parole from prison and mentioned in a speech just days before his murder in Manhattan.

"He was still Malcolm Little when he moved to the city of Inkster," says Aaron Sims, who is co-founder of the nonprofit Project We Hope, Dream, and Believe, a youth mentoring organization. "He worked at the Ford Motor Company Wayne Stamping Plant and at Cut Right Carpentry. That house is where he wrote his first speech."

Sims and his partners at Project We Hope are working to turn the house into a museum and community center.

"We've actually been fighting to save the house for over six years," says Sims. "In November 2017 [the] council agreed to donate the house to the Project to turn it into an historical museum and our office space."

Sims points to establishments such as the Martin Luther King Jr. Birth Home in Atlanta and the Medgar Evers House in Mississippi as precedents. But it's going to take a lot to get the museum up and going. Much of the inside of the place was burned after a squatter's fire got out of control.

Sims, who was president of Western Wayne County NAACP for 14 years, had an awareness of the place when he came across it while working on a project mowing overgrown lawns in a low income area of Inkster.

"The grass needed to be cut within the community," says Sims, who owns a landscaping company. "We started cutting grass and getting kids involved. The grass was tall and no one was taking care of the house. We started cutting grass and that led to having a conversation that if we get this house and turn it into a historical museum, that can put us in a position to reach out to troubled kids. A place where kids don't have to travel far and abroad to join an organization that can help them in life."

So far, the Project has managed to acquire the place and has held a couple of cleanups to begin clearing it out. Due to the fire, the walls have to be stripped down to the studs. There are other cleanups scheduled for Oct. 27 and Nov. 3, when organizers hope to finish that phase of the work.

The Project has been in touch with Michigan Historical Buildings Registry to find out how to get the location registered. They need nearly $6,000 just to make the application and have the historical marker placed there. Before that, they have to fix the place up. So it's a step at a time.

Sims might be the right guy to be involved. He seems to be an enthusiastic Inkster booster, pointing out that NBC newsman Lester Holt, cable TV mogul Don Barden, and Motown girl group the Marvelettes all have connections here. There's a bit of community pride in that — something to build on when engaging youth. And if youth are engaged in creating a Malcolm X museum, they'll learn about him and maybe get a bit of inspiration.

Malcolm Little was born in Nebraska but lived in Lansing from age two through 14, and later in Flint, Inkster, and Detroit. His father was killed when he was six and by age 18 Malcolm was a street hustler in New York. Known as Detroit Red, he was involved in drug dealing, robbery, pimping, and more. In 1946 he went to prison where he educated himself and joined the Nation of Islam. On his parole in 1952 Malcolm's dedication to Islam and skill as an orator led to a quick rise in the nation. He was very successful in opening new temples and increasing membership. He began meeting with the leaders of African countries, and his comment about "chickens coming home to roost" regarding President John F. Kennedy's assassination brought unwelcome scrutiny on the Nation.

Malcolm X's increasing prominence and fame led to frictions within the Nation, and a sex scandal involving its leader Elijah Muhammad just made things worse. In 1964 Malcolm X broke away from the Nation, denounced it's black separatist teaching, affiliated himself with Sunni Islam, and made a pilgrimage to Mecca. In 1965, after an increasing campaign of violence against him by the Nation, Malcolm X was shot and killed by three men identified as Nation of Islam members.

It's truly a tale of someone who rose up from the streets and prison to international fame and became one of the most important names in civil rights history. His life is also a lesson in sticking up for the truth and repudiating the politics of hatred.

That's all big and far away from a raggedy house in Inkster where Malcolm began his public life. But dreams can start with small things, and who knows where it will end up going. Sims is already eyeing the lot next to the house for future development.

"I would like to purchase if for a community center," he says. "Try to live out the dreams that Malcolm had, help rehabilitate the community, turn it into an education center, help kids learn a trade, use it as a food resource pantry, a building to supplement development within the surrounding community."

That's a basket full of dreams and ideas. The Project has no artifacts or collectors items to display other than the house. Of course that's a pretty big artifact itself. Right now that seems like enough. It's enough that somebody took the time to mow the lawn and that someone even knew that this place had some of the aura of civil rights history.

Well, there are folks in Inskster who know that sort of thing. Sims says he has spoken with some old-timers who actually met the minister back in the day. Maybe one day there will be a little sign out front that reads: Malcolm X slept here.