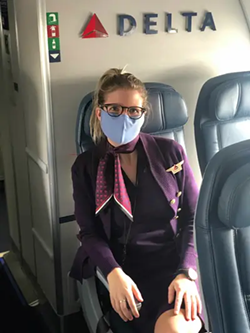 On Oct. 7, Delta Air Lines fired 26-year-old flight attendant Kiersten Bak for posts on her personal Facebook account, which they claim violate the company’s social media policy — including one in which she clapped back at an internet troll.

Last June, Bak, a native of Saline, Michigan, launched a feminist merchandise company called That Fucking Feminist, where she sells a wide variety of items including mugs exhibiting Alexandra Ocasio-Cortez’s image atop a banner that says “Bitches get stuff done” and infant onesies that read “Black Lives Matter.”

But as a result of her irreverent site, Bak says she began receiving roughly ten to fifteen harassing Facebook messages on any given week.

In one of the posts which led to her termination, Bak addressed an internet troll she says she now refers to as “Baby Brian,” who called her “one dumb woman.” She posted a screenshot of the message on Aug. 29 alongside the caption, “Imagine having the ego of a white man in America (no idea who this guy is. just some random snowflake who messaged me and immediately blocked me so I couldn’t respond 😂).”

Screenshot
A screenshot of a message a man sent to Kiersten Bak caling her "one dumb woman."

Later, on Sept. 10, a representative from Delta Air Lines called Bak with concerns regarding her social media, so she subsequently removed her profile picture in which she dons the company’s uniform with the Delta logo visible in the background, along with the employment listing in her Facebook bio. She was then called into a nearly two-hour-long meeting with superiors during which she was shown printed images from her Facebook page like her previous profile picture. In the printed image of her response to the internet troll, the screenshot of the online harassment she received was cropped out entirely.

Bak says her superiors particularly took issue with her usage of the word “snowflake,” which she had employed as a tongue-in-cheek subversion of the derogatory slang term typically aimed toward liberals by conservatives to “[imply] that they have an inflated sense of uniqueness, an unwarranted sense of entitlement, or are overly-emotional, easily offended, and unable to deal with opposing opinions,” according to Wikipedia. Bak says she was asked during this meeting if snowflake is a racial term to demean white people, which she denies was her intention. Regardless, she says, “You can’t be racist toward white people, especially as a white person.”

Then, in early October, she was suspended without pay and eventually fired the following week through a phone call. She appealed her termination and within 48 hours was rejected.

According to Delta’s Performance Development policies, an employee must be given verbal coaching, written coaching, and two official Corrective Action Notices prior to being terminated, with certain severe exceptions. This multi-step procedure was not followed in Bak’s termination.

Bak alleges that several others have reached out to her since her firing was made public in a Buzzfeed News article last year, including one terminated woman whose career at Delta Air Lines spanned 45 years. Bak says she has also received “love and support” from hundreds of people in the aftermath of the Buzzfeed article.

“And then you know [that support] dies down a little bit,” she recalls. “And you get back to reality and you’re like, ‘Oh my god, I actually got fired from this job that I worked really hard for, and really, really wanted.’ And then I had to sign up for insurance and pay my own insurance and you’re like, ‘Oh my god this is all happening all at once.’”

In a statement to the Metro Times, a Delta representative says, “While personnel issues are considered private between Delta and its employees, the circumstances described by our former employee are not an accurate or complete explanation of the company’s termination decision. Delta is a values-led company and our employees know and understand that they are representatives of our brand at work and through their conduct in social media and other public forums.”

The company donated at least $41,600 since 2018 to the Republican lawmakers who sponsored and passed S.B. 202 in late March 2021, a Georgia state law that allows the heavily Republican state legislature to disqualify voters in left-leaning areas and “criminalizes the provision of food and water to voters waiting in line, in a state where lines are notoriously long in heavily nonwhite precincts,” among other stipulations. The legislation has been decried by many as a thinly veiled method of anti-Black voter suppression. Delta’s involvement with the lawmakers behind S.B. 202 caused “#BoycottDelta” to trend on Twitter, and though Delta, which is based in Atlanta, publicly disavowed the legislation as “wrong,” it made no promises to divest from the conservative politicians who supported it.

DeltaPAC, the political action committee for Delta Air Lines, is supposedly non-partisan. A Delta representative told Metro Times that DeltaPAC “supports candidates on a bipartisan basis based on a set of criteria that includes their position on Delta’s priority issues and on aviation issues at large, leadership position, committee assignments, and representation of Delta operations, as well as a candidate's ethics and commitment to working towards racial equality.”

Since 2012, however, DeltaPAC has donated significantly greater amounts to Republican Congressional candidates than Democratic candidates. In each of the two most recent congressional election cycles, Republican candidates holistically received donations of more than $200,000 more than Democratic candidates. Additionally, the issues that Delta Air Lines lobbies as a corporation are largely related to aviation, airlines, and airports; fuel, gas, and oil; corporate taxes; trade; and energy and nuclear power.

“The thing that bugged me so much from the start was just this front that [Delta] kind of [puts] out there,” Bak says. “You know, money talks in this world, and money comes from rich, old, white men, and that’s who runs Delta… It’s so frustrating. You think you’re working for this good company… but when it comes down to it, corporate America just sucks… It’s so frustrating.”

Bak initially had ambitions to become a flight attendant because a nine-to-five job wasn’t for her and she liked the adrenaline rush of taking off and flying. She hadn’t expected to land the job, because “it’s easier to get into Harvard than to become a Delta flight attendant,” according to CNBC.

Acceptance into the flight attendant program at Delta Air Lines is less than one percent. Once Bak passed six or seven “grueling” rounds of interviews, she entered a rigorous, six-week training program in Atlanta which she describes as “the hardest thing [she’s] ever done.” Candidates must pass medical and first-aid training, “shocking” emergency simulations, and physically demanding pool drills. One former flight attendant recalled having to take an exam nearly every day and pass with at least a 90 percent, with the option to retake an exam just once. For Bak, college was nothing compared to Delta training.

According to AirlineCareer.com, approximately 60 percent of flight attendant candidates industry-wide make it through their training, and approximately half of these new hires then quit or are let go during their first year with the company.

“A lot of people were kind of confused as to why [I had my] profile picture with [my] Delta uniform,” Bak says. “But when you graduate from flight attendant school with Delta… that training is so intense [and] you’re so proud of yourself.”

Given her tough training period, Bak’s termination and the subsequent internet harassment she received were difficult — she’s been called a “bitch,” a “c*nt,” and a “libtard” by strangers on Facebook Messenger — but she chooses not to dwell on them. Instead, she remains focused on her work with That Fucking Feminist.

With every harassing message her company receives, she makes a contribution to Planned Parenthood or Black Lives Matter in an initiative she calls Petty with a Purpose. As of February 2021, That Fucking Feminist has donated more than $8,000 to various organizations, $6,000 of which went to Black Lives Matter. Bak says she is looking forward to continuing her business.

Delta is the only major airline whose flight attendants are not currently unionized. Fewer than 20 percent of its workforce is unionized, with pilots being the notable exception. In 2019, Delta encouraged employees to spend money on beer and video games instead of union dues through posters that they placed in break rooms. In May 2019, Senator Bernie Sanders (I-VT) led a letter with eight Democratic Senate colleagues to CEO Bastian condemning Delta’s “insulting and demeaning” anti-union campaign.

Without the protection of a union contract, Delta does not need just cause to fire its employees, nor does disciplinary action require “fair and transparent due process.”