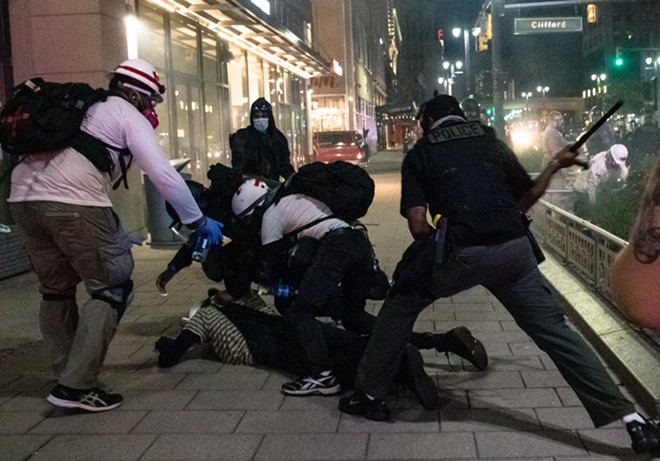 A group of protesters filed a federal lawsuit against Detroit city and police officials on Monday, saying officers used unnecessary, excessive force to break up peaceful demonstrations against police brutality.

The lawsuit, filed in U.S. District Court in Detroit, alleges police violated protesters’ constitutional rights by responding to peaceful demonstrations with “beatings, tear gas, pepper spray, and mass arrests.” Some of the protesters were hospitalized with serious injuries.

Attorneys for the protesters also filed a request for a temporary restraining order, asking a judge to prevent police from continuing to use excessive tactics — such as chokeholds, tear gas, rubber bullets, and pepper spray — against peaceful protesters.

Since May 29, police “have repeatedly responded to peaceful demonstrations for equal rights under the law for Black Detroiters with unnecessary, unreasonable, and excessive violence, subjecting non-violent demonstrators to, among other things, tear-gas, pepper-spray, beatings, rubber bullets, deafening and disorienting sound cannons, police vehicles, flash grenades, chokeholds, and cordoning them off in small groups ('kettled'), and arresting en masse without probable cause,” the temporary restraining order request states.

“DPD has made it clear that it will continue to use violence against peaceful demonstrators without Court intervention,” it continues.

Among the claims of excessive force in the lawsuit:

• Alex Anest, a clearly marked medic, “was beaten so severely that he was hospitalized for five days with a collapsed lung and broken rib.”

• Claylee Arnold was “tackled, detained, handcuffed, and then pepper-sprayed directly in the face as she lay helpless, pinned to the ground by multiple officers.”

• Protest organizer Nakia Wallace was placed in a potentially “deadly chokehold” and was told to “shut the fuck up before I make you the next victim.” 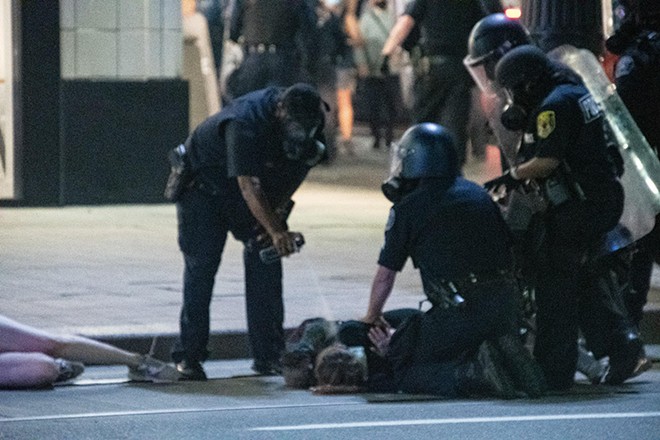 The lawsuit focuses on protests by Detroit Will Breathe, a nonprofit group that began demonstrations following the death of George Floyd at the hands of Minneapolis police. On at least seven occasions, the suit alleges that police used excessive force, injuring and arresting peaceful protesters and legal observers without probable cause in violation of their First and Fourth Amendment rights.

The latest instance of force came shortly after midnight on Aug. 23, when police plowed through a group of peaceful protesters, using batons, shields, fists, pepper spray, and tear gas, the suit states. Some protesters were left bloodied with broken bones. At least five people were hospitalized.

Among those injured were legal observers, one of whom was so severely beaten with a baton that she could not move.

Detroit’s top attorney Lawrence Garcia said the city plans to file its own lawsuit against protesters “to stop further violations of law and to hopefully reduce the assaults on police officers.”

“After thirteen weeks of protest and demonstration, what has been recently happening in the streets of Detroit is not about raising awareness around legitimate racial justice concerns,” Garcia said in a statement. “Wearing a bullet-proof vest to a protest, shows a certain desire and intent. What is going on nowadays is more about provocation and public nuisance than bringing power to the people.”

Attorneys for the protesters are Jack W. Schulz and Amanda M. Ghannam, of Schulz Law PLC; William Goodman and Julie Hurwitz, of Goodman Hurwitz PLC; and Sean Riddell of the Riddell Law Firm, all on behalf of the National Lawyers Guild.