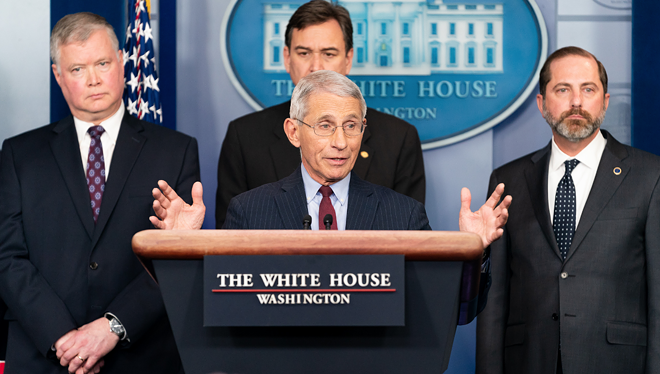 Dr. Anthony Fauci, the Director of the National Institute of Allergy and Infectious Diseases and one of the few experts who seems to be able to tame President Donald Trump, appeared on Good Morning America to explain the timeline of the spread of the coronavirus in the U.S. — and issued a warning for Detroit.

While New York City has become the epicenter of the virus in the U.S., Fauci also explained which other cities concerned him. The Motor City was one of them.

"Well certainly New Orleans ... is in that area where it's worrisome because the spike and peak and dynamic of the curve are starting to resemble a bit of New York. It's a smaller city obviously, so they can't be totally comparable. But the dynamics of the outbreak in New Orleans are worrisome.

We're also worried about Detroit. Detroit is starting to show some signs that they're gonna take off."


Detroit has become a national hotspot for the virus and "will have a worse week next week," U.S. Surgeon General Jerome Adams said Friday on CBS This Morning. Detroit has just 6.7% of Michigan's population but 26.5% of the state's coronavirus deaths and 28% of the confirmed infections. As of Sunday, Detroit had more than 1,500 confirmed cases and 35 deaths.

Experts say Detroit was uniquely ripe for the coronavirus to spread due to the city's high poverty rate.

"Things are bad in Detroit," Duggan said Saturday at Detroit's new drive-through coronavirus testing site at the State Fairgrounds. "The numbers are going to get a lot worse because now we're testing. So you watch what happens to our numbers. We probably added 50% of testing capacity to the entire state with what we're doing here." The facility is one of several planned for the metro Detroit region.

Fauci says he was able to convince Trump with some "intensive conversations" to keep large parts of the economy shut down through the end of April to slow the spread of the virus. Previously, Trump said he wanted to reopen the economy by Easter — for no reason other than "I thought it was a beautiful time. A beautiful timeline."

"Even if these guidelines are extended, we will lose more people," Fauci said. "Exactly how many more we would lose is uncertain, depending upon the efficiency of the mitigation methods. But clearly what you saw yesterday and the day before, that within one day we doubled the amount of deaths. It was just very, very sobering."

On March 23, Michigan Gov. Gretchen Whitmer issued an executive order calling on all residents to stay home as much as possible for three weeks, though it could be extended.

On Sunday, Fauci warned that the U.S. could see millions of coronavirus infections and between 100,000 and 200,000 deaths.

Fauci also said he was hopeful that an antiviral drug could be developed by the summer, but a vaccine could take a year or a year and a half.

You can watch Fauci on Good Morning America here.