Detroit Judge Damon Keith, who coined 'Democracy dies in the dark,' dead at 96 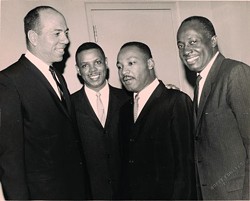 Long-serving federal Judge Damon Keith died on Sunday morning, according to his family. He was 96.

His first major case — Davis v. School District of City of Pontiac in 1970, in which he ordered Pontiac to desegregate its school district — came less than a year and a half into his job; the KKK retaliated with death threats and by firebombing 10 school buses. In perhaps his most famous ruling, 1971's pre-Watergate United States v. Sinclair, Keith ordered that president Richard Nixon and his attorney general John Mitchell violated the Fourth Amendment by wiretapping conversations of Detroit's radical White Panther Party without a warrant.

After the Sept. 11, 2001, terrorist attacks, the U.S. Justice Department began deporting Arab and Muslim immigrants in secret court proceedings, which The Detroit Free Press, The Detroit News, the ACLU, and U.S. Rep. John Conyers challenged in federal court, arguing it was a violation of the First Amendment to close immigration hearings to the public.

In his decision, Keith wrote that "Democracy dies in the dark." The phrase was later adopted by The Washington Post for use as its slogan, who tweaked it to "Democracy Dies in Darkness" in 2017.

You can learn more about that case here, and read our 2013 cover story on Keith here.