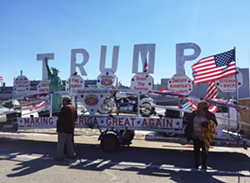 Rob Cortis and his Trump Unity Bridge have been stopped.

Vandals nearly destroyed the Livonia resident's vehicle and the parade float it pulls in broad daylight Friday, while he was stopped in Alexandria, Va. on his way to a Saturday pro-Trump rally in Washington. Cortis has driven the bridge more than 10,000 miles across the country in honor of the president and was most recently spotted outside Kid Rock's first show at the pizzarena this week.

"This is horrible ... This is what the left is all about," Cortis can be heard saying in a video as he surveys the damage.

The video, posted to Facebook, shows the culprits were thorough. They filled the vehicle's gas tank with sugar, deflated its tires, stuffed the tailpipe with cloth, and broke the arm of a replica of the Statue of Liberty.

The political affiliation of the vandals is unclear, as they seem to have scrawled a swastika on one of the windows in soap. They also drew an image of a heart with a line through it next to the acronym "USA," leaving Cortis particularly peeved.

"Freedom of speech is one thing, but no love for the USA? These people are horrible," he said.

You can see the crafty destruction of the Trump Unity Bridge for yourself in the video below.