The story of Detroit hardcore gets the documentary treatment 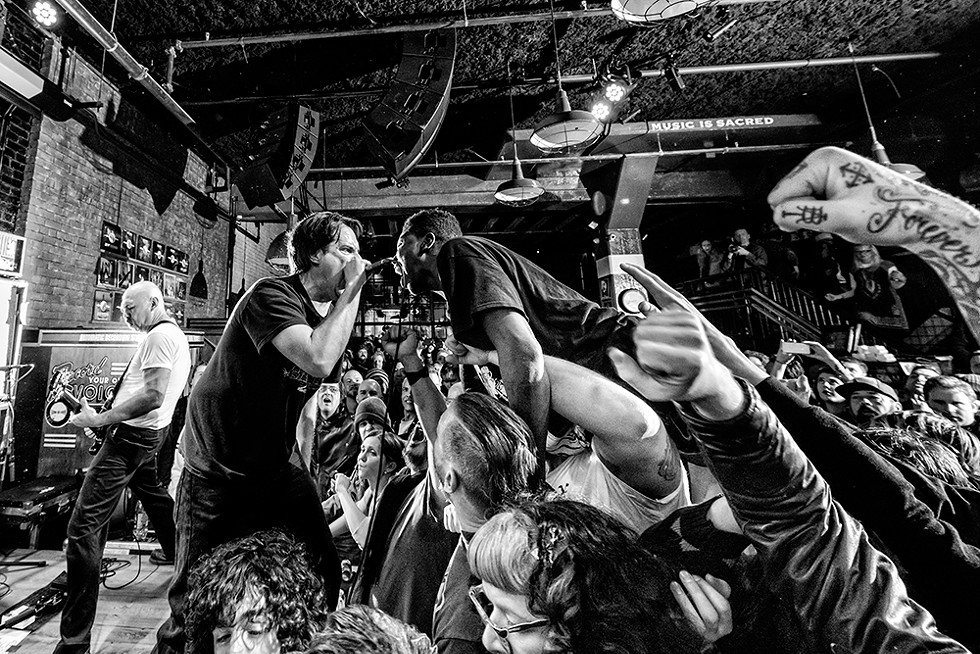 
It's perfectly fitting that the definitive documentary on Detroit's legendary early '80s punk hardcore scene is done by a Windsor filmmaker. Otto Buj's Dope, Hookers and Pavement: The Real and Imagined History of Detroit Hardcore finally makes its world premiere as part of the virtual Freep Film Festival Dec. 2-6. The film was slated to debut this past April at the festival but was delayed by the pandemic. It's a funny, insightful, and moving testimony to the power of art and community to change lives.

Among the great surprises in the film is that a disgustingly dirty Windsor dive bar run by a badass 70-year-old woman served as ground zero for the Detroit harcore scene. Coronation Tavern (1521 Riversdide Dr.) owner Stella Martinek never hesitated to use a frying pan or chains to maintain order or shoo customers out the door at closing time. When legendary original D.C. hardcore band Minor Threat played there on Aug. 2, 1981, it was the equivalent of catching Elvis or the Beatles on The Ed Sullivan Show for future Detroit hardcore musicians. Their tight, fast performance changed the lives of any musician in attendance. If you were in a band, it was the new direction for your band. If you didn't have a band, it was time to start one.

The film, too, has a surprising Canadian genesis. After Buj's mother passed away in 2015, he had the family Super 8 movies digitally transferred. While going through the stereotypically nostalgic scenes of '70s family life, a few minutes of footage in the legendary Detroit hardcore venue the Freezer Theater (3958 Cass Ave.) from March 1982 jumped out. His brother Denis Buj had filmed it. It was the only known footage from the Freezer. From that, an over two-year-long project emerged to document the incredibly short-lived but brilliant Detroit hardcore scene.

The depth of the cast of characters in the film is amazing. Minor Threat/Dischord Records owner Ian MacKaye, Meatmen frontman/Touch and Go Records founder Tesco Vee, Negative Approach frontman John Brannon, Touch and Go Records owner/Necros bassist Corey Rusk, skater Bill Danforth, and Bored Youth vocalist Rob Michaels are particularly articulate about remembering nearly 40-year-old shows. Given, too, that onstage hardcore shows back then looked like a white teenaged sausage fest (which itself sounds like the title to a lost Meatmen song from the era), it's impressive the diversity of people from the scene that Buj interviews in the movie.

Generally speaking, everyone seems to be in agreement on the key events of a scene that flamed out less than two years after it started. The film does have a lot of fun, though, with the awesome, yet smaller details that people get hazy with.

In a hilarious sequence, the documentary talks about the Burger King that was across the street from the Freezer Theater. It served two important purposes to the scene: It had a usable bathroom, unlike the Freezer. And more important to a bunch of broke kids, it had the infamous Burger Thang Special.

Part of the challenge the entire Detroit hardcore scene faced back then was that it was a scene by teenagers for teenagers. Traditional bars and venues weren't an option because the teenage hardcore audience couldn't get in. This led to a transient scene always in search of a home. The venues of the Detroit punk scene at the time didn't initially want to work with a bunch of out-of-control, underage kids.

At the peak of its creativity and underground status, the hardcore scene did find a home in the Freezer Theater in Detroit's Cass Corridor. The venue was an alternative performance space that had welcomed a wide array of creative shows. Part of the beauty of the documentary is how it ties the Cass Corridor's '70s counterculture to the Detroit hardcore scene, which itself built the foundation for all the alternative music that came out of the Corridor after that.

By the time the hardcore scene found its home at the Freezer, it was taken over by a shadowy figure known as Fred Freezer. Lacking a business license, liability insurance, or electricity, the bunker-like space proved to be the perfect blank slate and performance space for the hardcore scene.

Fittingly, a Minor Threat show at the Freezer on June 18, 1982, marked the end of the hardcore shows there and marked the beginning of the end for Detroit's hardcore scene. An epic street brawl ensued after the show, which is humorously recounted by Ian MacKaye, Fred Freezer, and participants in the fight.

After that, the shows moved up the street to John Brannon and L-Seven vocalist Larissa Stolarchuk's home and practice space called the Clubhouse (406 W. Willis St.) and then to City Club (64 Elizabeth St.). But by that time, the scene's increasing popularity led to it being co-opted by a bunch of frequently racist and violent white British Oi! cosplayers from the suburbs. While the mosh pits up until then had always been marked by wild abandon, there was no intentional violence. There was a code.

But with the new "fans," all that went out the window.

By that time, most of the key hardcore bands were moving on musically anyways. The Necros headed in a more rock direction. Negative Approach broke up, and Brannon formed the decidedly different, yet equally powerful Laughing Hyenas. Ian MacKaye went on to form Fugazi, which itself became one of the most inspiring alternative bands of its era.

What was left behind by the incredibly brief creative outburst of the hardcore scene continues to be massively inspiring. The complete discographies of Negative Approach and Minor Threat — to this day — are timeless and perfect summations of their time. They remain a blueprint for how hardcore is done. Likewise, Buj's documentary is a perfect summation of the Detroit hardcore scene. It's a must-see for fans of hardcore music or Detroit music history.

All the music of the other bands in the scene, like the Necros, the Fix, Bored Youth, and the Meatmen, remain as invigorating and often as humorous as when they came out. Most important, the hardcore scene's DIY example laid the groundwork and set an example for all the independent musicians who followed them. Clubs weren't going to let them play. Nobody was going to write about them. Nobody was going to put out their records. Detroit's hardcore kids did it by themselves, for themselves.

Ian MacKaye sums it up beautifully at the end of Buj's film.

"Music was a currency," he says. "The scene is what happens outside the gig. That's where the real social fabric is being knit. I think there was an enormous amount of really thoughtful people — men and women, boys and girls — who were sitting on the curb making this sort of scene something that was more connected than most people realize. Detroit rock city, right?"

Dope, Hookers and Pavement: The Real and Imagined History of Detroit Hardcore can be viewed as part of the Freep Film Festival from Dec. 2-6. Tickets are available at freepfilmfestival.com. Detroit Punk Archive curator Rob St. Mary will interview Otto Buj on the Detroit Free Press Facebook page and on the Freep Film Festival YouTube channel at 7 p.m. on Friday, Dec. 4.