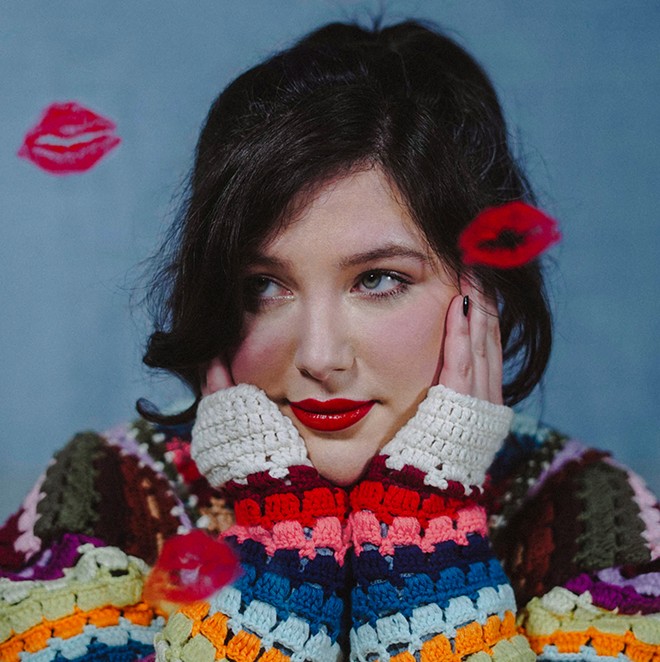 Erin Soorenko
Lucy Dacus relives her youth so you don't have to.

Most people remember their childhood like a scrapbook — the shiny, happy stories enhanced with embellishments as they get retold over and over, while the darker moments stay buried in the attic, brought out in only the most vulnerable times, or never at all. Singer-songwriter Lucy Dacus, on the other hand, seems to remember her youth in rapturous detail. Her record Home Video and new single "Kissing Lessons" recount these memories in a string of vivid vignettes — marrying awkward moments with sweet nostalgia. She transforms mundane milestones of youth, like making out in a basement or going to bible camp, into precious souvenirs, reminding us that it's the little things, good or bad, that make us who we are.

Dacus explains that writing Home Video actually helped her process a lot of her youth. "I'm always finding out while I'm writing, that's like maybe the main reason why I write is to actually figure out what I think," Dacus says. "I'd like to think that I'm a self-aware person, but it actually doesn't come that easy to me."

Ironically, for someone who is such a gifted songwriter, Dacus kind of hates talking about herself. Whether it was years of a deeply Christian upbringing or a fear of giving too much away, she finds it easier to write about her life through the context of other people — like she's an outsider looking in on her own life.

"I still haven't gotten up the guts to talk about myself," says Dacus. "I think it feels embarrassing or something... but I can talk about myself in regards to other people." In "Kissing Lessons," Dacus recounts the origin story of her first kiss, a "lesson" from an older schoolmate who promised to help her secure her crush. "She gave me lip gloss and a hair toss / and after that / a lesson in kissing."

In this song, Dacus rids herself and "Rachel" of any shame and outlines the irony of two young girls, talking about their dream futures with their respective husbands, while enacting those fantasies with each other in real time. It's a short and sweet meditation on the blurred lines of close female friendships, the innocence of youth, and the ways that societal norms weigh on us from an early age — a lot to unpack in just under two minutes.

With every record, it feels as though Dacus is closer to sharing her truest self with her listeners, even if she might not want to. "I want to know who I am, and sometimes, I don't feel like I do," Dacus muses. "And I want the people close to me to know who I am... I don't know if I want everyone to know who I am." A statement that speaks to our generation: How much of ourselves should we show the world? Whether it's on TikTok, or to our co-workers, or on our Tinder profile, how much is too much? When does anyone deserve to know anything about us at all?

Dacus explains that now, it's hard to write a song knowing there's a lot of people who will likely consume it. She says that she still writes songs that she never releases, but it's hard to push the audience out of the picture during the creative process, especially when the lifespan of her emotions or identity is so fleeting. "It feels like recordings are so resolute. I know that I'm changing all the time, so it feels almost counter-productive to be like, 'This is who I am,' and then put out a recording and inevitably change," Dacus explains. "Maybe I'm overthinking it, but that's just what I do." Lucky for us.

Dacus walks so that we can run into our exes and go sing "Hot & Heavy" at the top of our lungs alone in our cars. She perfectly encapsulates the joys, pains and horniess of adolescence so we can relive our own. "I think part of engaging with music — or any media — is projection," she says. "You put yourself into the story. And so, I do feel like people often confuse me for themselves. I don't think there's any way to reconcile that. I think it's just... not getting too influenced by other people's idea of who I am."