The 84-year old Davis is one of few artists to be inducted into three halls of fame, and he’s playing at the Southfield library 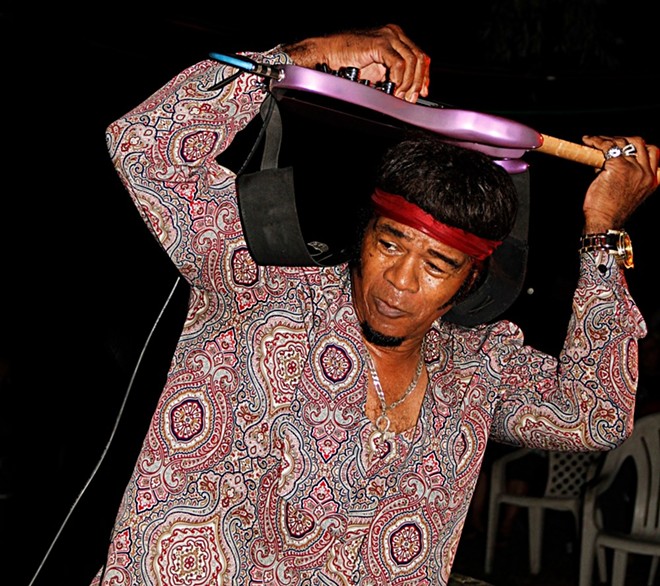 It’s true: the man credited with teaching Jimi Hendrix how to play the guitar lives right in Southfield. His name is Billy Davis, and at 84 years old he’s a bonafide rock and blues legend who’s still jamming after all these years.

Davis, who was born in Mississippi and moved to Detroit in 1951, will be performing with his group the Billy Davis Rhythm Machine Band on Wednesday, Oct. 19 at the Southfield Public Library. He’s one of very few artists to be inducted into the Rock and Roll Hall of Fame, the Doo Wop Hall of Fame, and the National Rhythm & Blues Hall of Fame.

In the late 1950s, Davis was the lead guitar player for Hank Ballard and the Midnighters, who wrote and performed the original version of “The Twist,” inspired by the popular dance craze.

Davis and Hendrix met at a Midnighters show in 1959. Entranced by Davis’s guitar feedback (which was unusual at the time) and wild stage antics, Hendrix was determined to meet him after the gig.

“We were playing at the Eagle Auditorium in Washington and Jimi came to the show. At the time Jimi was 16 and I was 20,” Davis recalls over the phone. “Pat (one of his bandmates) told me Jimi had come to meet me, but I was so busy looking for girls that I rejected him about three times. I said, ‘I don’t have time to meet no guy, I’m trying to meet girls!’ But finally, I met him and brought him backstage and we hit it off so good. He was such a nice person. I spent a whole week with him teaching him what I knew about playing guitar and that’s how we became friends. That was 1959, and our friendship lasted until he passed away.”

Every time the Midnighters played the west coast, Davis would spend time with Hendrix, showing him his techniques.

“He was looking at all the hit records I had played on and was wondering how to play them,” Davis says. “We had ‘The Twist’ and ‘Thrill Up on the Hill,’ and I was doing all the music arranging for the Midnighters. And then when he saw me on stage, he wanted to learn about that too. I was doing stuff that no other guitar player did at the time — playing with my teeth, and jumping, and doing flips on stage.”

Davis started playing the guitar at 16 years old. He was inspired to pick up the instrument after hearing Muddy Waters’s 1954 track “Hoochie Coochie Man.” But he didn’t have a guitar and didn’t know how to play one, until one day when he heard a neighbor in his Eastside Detroit neighborhood playing on his porch.

“I started going by every day and sitting on the steps and listening to him playing,” Davis tells us. “He was blind. I did that for a month or two and one day he said, ‘You’ve been coming here quite a while but you don’t say nothing.’ And I’m thinking to myself, ‘How does he know I’m here?’ I said, ‘My name is Billy and I’ve been hearing you play. I would love to learn how to play, would you teach me?’ So every day I was at his house and he taught me how to play. I don’t know how he didn’t get tired of me. That’s why, to this day, I give time to younger people, because he did that for me.”

One of Davis’s cousins would let him borrow his guitar, but he had to practice in secret since his father thought blues was the devil’s music.

“My dad was a preacher and he’d say, ‘You ain’t gone play no blues in this house,’” he says. “So I had to hide my guitar under the bed. My mom knew about it. My father was also a construction worker, so I’d sit at the window and when I saw him walking home, I’d run to my room and toss it under the bed. I knew he wouldn’t approve, but that’s what I wanted to do, so when I saw this blind guy on the porch, it was like a dream come true. Four years later, I was with Hank Ballard and the Midnighters.”

Before that, Davis formed his own band Billy Davis & the Upsetters and they worked with Berry Gordy as a backup band for groups like Smokey Robinson and the Miracles. Davis remembers Gordy was “just a songwriter” at the time and hadn’t formed Motown just yet.

Billy Davis & the Upsetters stuck with Gordy for two years until the band refused to play a gig in downtown Detroit because they wanted more money than what Gordy was paying.

“[Gordy] was very disappointed and we would never work together again, and in the same year he started Motown,” Davis says, noting that he doesn’t regret how things went down. “I’m in three halls of fame and I don’t know of anyone else that’s in all three halls of fame. If I’d have just stayed there at Motown, I would have just been a background musician. I wanted to get out there and be flashy and meet girls.”

He’s probably right. It’s possible he and Hendrix would have never become friends, either. After they met in 1959, Davis continued mentoring Hendrix until he was drafted in 1963 and deployed to South Korea. When Davis returned from the army, Hendrix had made it big.

Frustrated and slightly upset, he tells us how people who never believed in Hendrix had all of a sudden become fans.

“People used to talk about him, saying, ‘Aw man, that guy is playing all that craziness,’ and back then I used to drink a lot of liquor so I would call them out,” he says. “Now they talk about how great he is, but they didn’t say that in the beginning. They doubted him until he came back from England. When I started out with Berry Gordy in 1957, he said, ‘Man, I can’t sell that,’ and he was right, because that guitar sound and feedback I was doing wasn’t popular in America at the time, but when Jimi went over to England it was totally accepted over there. He became a superstar.”

After Hendrix got big, he would pick Davis up in a limousine and the two would drive around New York, where they both lived at the time, talking for hours. Davis remembers him as quiet and unusually shy, but one of “the most beautiful persons [he’d] ever known.”

He also remembers how their mutual friends began to use Hendrix for his money.

“I became one of the only people he really felt safe around and I could tell,” Davis says. “I remember we had another friend who we called Gorgeous George. One time Jimi and I were together, George came by and asked for some money, so Jimi gave him $1,500 out of his pocket and an autographed 8x10 picture. After George left, we came down out of the hotel and I saw the photo on the street crumpled up. I took the picture and hid it so Jimi couldn’t see it because I knew it would hurt him very much to see that... I still have that picture to this very day.”

He tells us about a song he wrote for Hendrix called “Eight Month Baby” that they never finished.

“We went in the studio and stayed for three days and didn’t get nothing done. It turned into a big party in the studio — we stayed from Friday to Monday morning. That was in 1969,” he remembers. “[Jimi] said, ‘I have to play some shows in England and we’ll finish the song when I get back.’ Little did I know that would be the last time I ever spoke to him.”

Davis found out about Hendrix’s passing when he saw a copy of the New York Post with a photo of Hendrix on the front page in the trash at a subway station. The headline read, “Jimi Hendrix dies at 27.” Davis says he still has that newspaper.

He’s been holding onto that unfinished song all these years but plans to eventually release it in Hendrix’s honor.

“My relationship with Jimi is very important to me because we had a special bond,” he says. “He just left us too soon.”

At the Southfield Library performance, Davis is planning to play classics like “The Twist” as well as a newer song “This is Our Land,” which is dedicated to the Tuskegee Airmen. Southfield resident and late Tuskegee Airman Alexander Jefferson will also be honored at the event with a special tribute.

We can’t guarantee that Davis will pull out all his tricks and start doing backflips on stage this time, though.

“I kinda let that go because I see other people doing it now,” he says. “I was the originator of that, but I enjoy seeing the younger people doing it. Playing with my teeth and behind my back, and getting on the floor making love with the guitar, that just came to my mind at the time. I just felt it and that’s what I did. I put my heart and soul in it. I get a little carried away sometimes, and I might do anything on stage but not so much these days.”

His tell-all memoir Billy Davis: Odyssey of a Music Legend is still in the works and will be available soon.

After living in Japan and traveling across Asia, Randiah Camille Green realized Detroit will always be home. And when she says Detroit, she's talking about the hood, not the suburbs. She has bylines in Planet Detroit News , Bridge Detroit , BLAC magazine, and Model D . Her favorite pastimes are meditating...
Read More about Randiah Camille Green
Scroll to read more Local Music articles