Indie rockers JR JR go their own way after breaking up with Warner Bros. 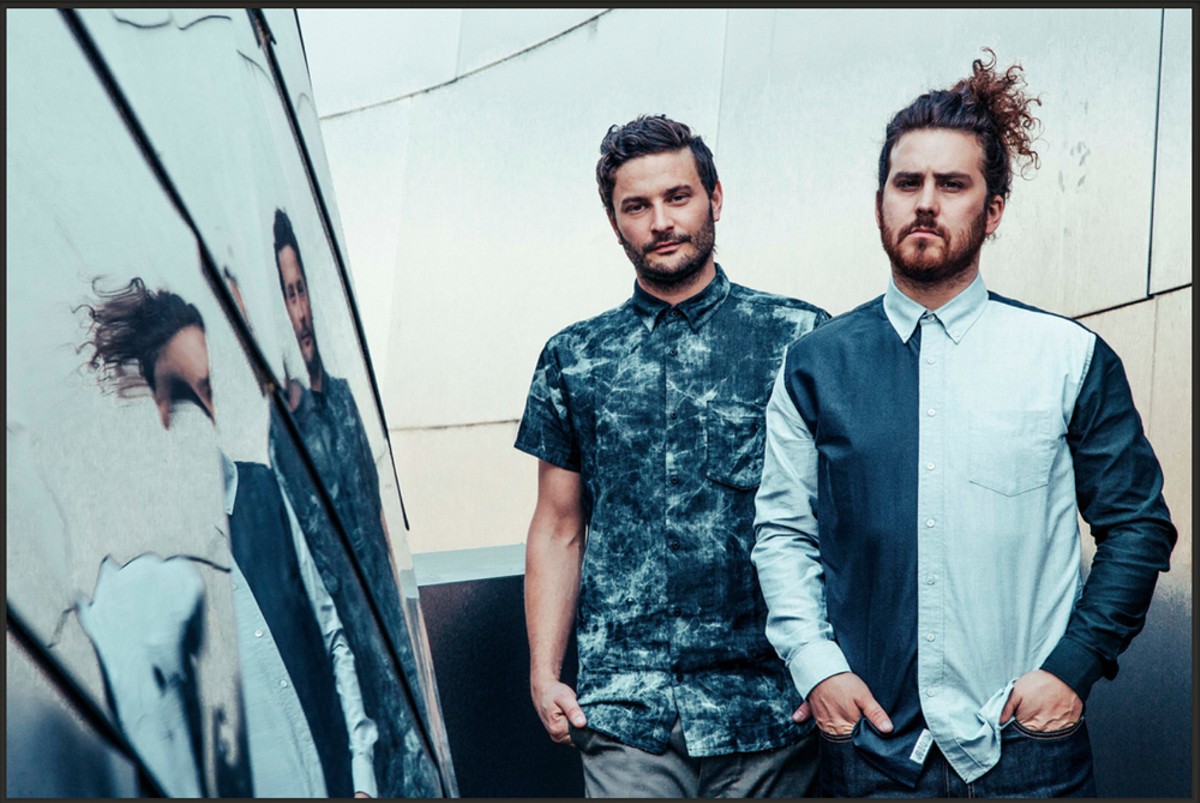 Josh Epstein and Daniel Zott were making music that could stop time way before we all got too easily distracted to finish listening to a four-minute song on our phones. I was in the Cass Café on a weeknight 10 years ago when these two songwriters donned their own colorful Nascar jumpsuits and sang indelible earworms to a quiet crowd of a couple dozen coffee drinkers. They were making sweet, spacey indie-pop that enthralled those in attendance, and that's still the case a decade later.

Epstein and Zott have been writing, recording, touring, and performing as JR JR since 2015, after their label Warner Bros. persuaded them to change their name from the one used on their major label 2011 debut, a moniker that played off of the name of stock-car racer: Dale Earnhardt Jr. Jr. When the band co-headlines the Treeverb Music Festival in Ann Arbor this Saturday with Computer Games, they'll be celebrating the release of a new double album, Invocations/Conversations, its first batch of new music in almost four years and the first release on their new label, Love Is EZ.

"I feel like music has always been about making something that has some permanence," says Epstein. "My friends have all said how ridiculous it is that just when music is getting back to how it was in the early '60s, essentially prioritizing singles, that's when JR JR decide to put out a double album! I get that. A lot of times people don't stream an entire album. But I feel like this is our homage to music meaning what it meant to us when we were growing up. We live in a time when people are fixed on making things that are 'meme-able,' or making songs that have to have something really strong within the first 10 seconds so that no one skips it... So it is a weird juxtaposition of what I always thought music was vs. what it is now."

Even if you can certifiably say that JR JR make "pop" music, neither of its two creators wanted their whims to be dictated by market trends or corporate standards. They formed the band because, back in 2009, they both needed an outlet for creating whatever the hell they felt like creating.

"Let's do all the things we haven't done with our own bands," Epstein says, recalling their mantra back then. Zott and Epstein knew of each other and their previous bands from playing around the Detroit music scene as contemporaries, but hadn't actually forged a friendship until they wrote their first songs.

"We realized that 'pop music' was something we both really loved," he says, and that JR JR, when it formed, could be a freeform-laboratory where they could fuse an amalgam of influences and a splash of electronic experimentation into catchy-as-hell melodies threaded into summery tones over danceable rhythms.

But when you're on a major label, as JR JR was for five years, "you always have to play the game a little bit because they won't release an album unless they have a song they think can make an impact," Epstein says. "(Invocations/Conversations) is us getting back to making music that's personal and telling the story of where we're at... As weird of a time as it was for our band, I think it has equally been a weird time for the world."

About that "weird time" and how it brought Zott and Epstein to eventually break from Warner and form their own label (Love Is EZ): Invocations/Conversations features 16 songs, eight of which were created right around the end of 2016, and wound up hanging in limbo while the band started pulling themselves out of their contract. By the time they'd wrapped up with Warner, eight more songs had naturally materialized, thus becoming Conversations.

"Warner was really great for us in a lot of ways," admits Epstein. "It was a big opportunity, and it felt like the right place for us at the time we signed. But as we got further along in this [streaming] age and with record labels still being beholden to shareholders, that starts to impact the kind of music they want to promote. I think that everyone at labels are scared to take risks because if it goes badly, they'll be blamed, so people who say nothing and prefer to be uncontroversial-as-possible end up sticking around, and that doesn't necessarily give you any guidance or anyone with a lot of creative perspective. And it ends up making you have to jump through hoops and it feels real bureaucratic."

But just because JR JR is a "pop" band, that doesn't mean they write songs devoid of substance. The first batch of songs that would become Invocations included some subject matter that didn't shirk from less sunnier stories or stormier emotions from personal experiences. And Epstein and Zott were troubled when, three months after wrapping the first eight songs, they found out that since their label had ostensibly deemed some songs  "too dark" to be "popular," that it hadn't been sent out to any radio stations or promoted to press contacts.

"They could have just told us," Epstein says, "but instead to secretly not [do] anything with the songs almost felt like it was hurting us. That was the beginning of the end."

Getting out of a major contract and then establishing your own label takes time and invites anxiety, but with this new release, it's the start of a new chapter for JR JR. For Zott, these past few years have been quite a journey. Within a three-month span in 2017, Zott and his wife, having been told it was likely not possible for them to conceive a child biologically, finalized the adoption of their first child, began the process with a second, only to find out they were pregnant with a third biological child, born at the start of 2018.

Epstein has had a different but still considerable life-altering journey since 2016.

"As I started to sort through my own personality flaws, I realized how many things were patterns that I'd done over and over, and I wanted to try to grow past all of that and really get to a place where I was living my values and not being guided by chemicals or fear or whatever it was," he says. "Everyone should learn transcendental meditation. It's been a huge help for me, and a lot of people I know, for being more present and in control of my thoughts. My ego, in terms of music, is gone; I just want it to be good, and to just get out of the way and serve the song — that's what we've always wanted to do."

While Zott is still based here in Michigan, Epstein moved to Los Angeles several years ago, though he makes consistent homecoming trips. "I'm really lucky that Daniel has been such an amazing communicator when we need to talk about something important," he says "It's been an incredible relationship; we've grown closer over the years, and I'm really lucky to work with someone who's so patient and caring and understanding and forgiving."

Epstein calls his longtime bandmate an "incredible human specimen," because "he's always who he is, he's so confident, he's so himself; I'm a bit of the opposite. I'm trying to figure out how I can just be me and still be learning and growing, without changing all the time."

And those aren't the sort of contemplative, soul-searching ruminations you'll find in typical "pop" music, and that was what was always going to set JR JR apart from the pack.