Neil Patterson Jr. describes it as ‘like an internet collective/band/stand-up comedy/performance art thing’

Courtesy photo
“I’m telling a roomful of people like, stuff that I would normally only tell my therapist,” Neil Patterson Jr. says of his new project SUMPP. “It’s weird, but it feels really natural.”

When we last checked in with Neil Patterson Jr., he was retiring his punk band Downtown Brown after more than 20 years. He was no longer relating to the sophomoric lyrics he wrote when he was younger, and told us next project would still be “idiotic” but also “heartfelt.”

That new project, SUMPP, was to make its hometown live debut on Friday at the Loving Touch (it was rescheduled to Saturday, March 25 due to Winter Storm Elliott). The show will be recorded à la a live stand-up comedy album because it’s easier than booking studio time, Patterson explains, but also to capture the energy of the performance.

SUMPP show rescheduled due to snowstorm: The new project from Downtown Brown’s frontman was supposed to make its local debut, if not for that good-for-nothing blizzard

“I’m telling a roomful of people like, stuff that I would normally only tell my therapist,” he says. “It’s weird, but it feels really natural.”

The project was kicked into high gear in recent months when Downtown Brown got an opportunity to tour with California punk rock band Flipper. “I was like, ‘Downtown Brown is done,’ I told our agent,” he says. “And they’re like, ‘Why?’ And then I’m like, ‘Because I didn’t want to do it anymore. But I got this new thing.’ And so then I had to get it together real quick.” (Patterson wound up filling in on bass for Flipper for a string of dates when their bassist got sick, a role that has been filled by rock ’n’ roll icons like Krist Novoselic of Nirvana and Mike Watt of the Minutemen. “It’s cool because it’s almost like an accident,” Patterson says. “I’m getting to do all this crazy shit. I’m grateful, man. It’s a weird life.” He also recently played guitar on several hometown dates with horrorcore rapper Esham, a gig Downtown Brown’s former drummer hooked up.)

As Patterson scrambled to get a band together, he says his bass player suggested a different approach. “He’s like, ‘Why don’t you do a Ween thing?” he says. “Because in the early days it was just Gene and Dean Ween and a drum machine.”

During the pandemic, Patterson got in the habit of playing live-streamed solo shows along with a drum machine, inspired by artists like Reggie Watts and Marc Rebillet. He views the project as more of a collective, and envisions collaborating with different artists.

The project’s name came from an inside joke between Patterson and rapper JP from the HP, where the greeting “Sup?” mutated into “Sumpp?” “I decided just to make that be the name because I wanted to have a one-syllable band name like GWAR or Ween,” Patterson explains.

Downtown Brown was known for Patterson’s onstage banter, and that’s where he sees a stand-up comedy aspect in SUMPP. “The idea is since I’ve been performing this set kind of as a solo artist, is to record the whole thing like a stand-up comedy special,” he says. “But it’s not comedy, because I’m talking about like, my dad dying. I’m talking about how I’m on antidepressants, but I’m doing it my way. I’m taking trauma, and I’m making jokes about it. I’ll get up in front of a bunch of people I’ve never met and tell him like, dark shit, but do it in a way that’s fun and entertaining. And you wouldn’t think it would work, but it’s been working.”

Patterson says SUMPP will perform some Downtown Brown songs, especially songs that the band didn’t play a lot. He has also reworked the lyrics to “Pillz,” a 2012 Downtown Brown song about depression, to more reflect where he is with his own mental health these days.

“It’s funny because I kind of reworked that song to be instead of being like an anti-medication song, it’s a ‘do whatever the fuck you can do to survive’ kind of song,” he says. “I think that stems from growth and loss and becoming an adult, because, you know, there’s things that I was singing about when I was 19, that when I’m 40, I’m not that person anymore.”

He adds, “I had a kid come up to me when I was in Ohio, and he’s like, ‘Yeah, fuck those things. I don’t need to take pills for my depression.’ ... For some kid to tell me he’s not medicated because of some song I wrote, I was immediately like, ‘Dude, I’m on pills now. So I don’t know what to tell you.’ Like, you’ve got to find out what works for you, because I almost lost my relationship, I was so depressed.”

He adds, “But it’s funny. I present it in a way where I talk about the sexual side effects, you know, as like a punch line. So I’m like talking about really heavy shit, and then I’m like, ‘My dick doesn’t work as well as it used to!’ It’s just kind of the way I look at the world. I try to make a joke out of everything ... It kind of disarms the subject matter.”

Patterson says this is just where he’s at now, but the direction of SUMPP could change. “I don’t know what it’s going to become, because it’s so new,” he says. “But right now, it’s really fun and obnoxious, and people are enjoying it. … It’s like a new canvas to get weird with.”

SUMPP performs with Vag Against the MaSHEine, Carmel Liburdi, and Space Skull on Saturday, March 25 (rescheduled from Friday, Dec. 23) at the Loving Touch, 22634 Woodward Ave., Ferndale; 248-820-5596; thelovingtouchferndale.com. Doors at 7 p.m. Tickets are $10. All ages welcome. 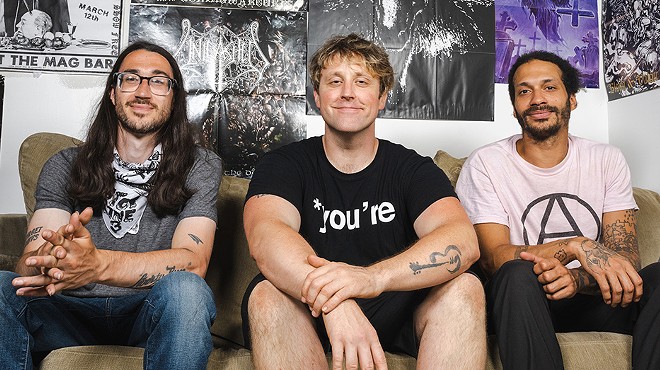 After more than 20 years, rock band Downtown Brown to play final show in Detroit: Down, but not out