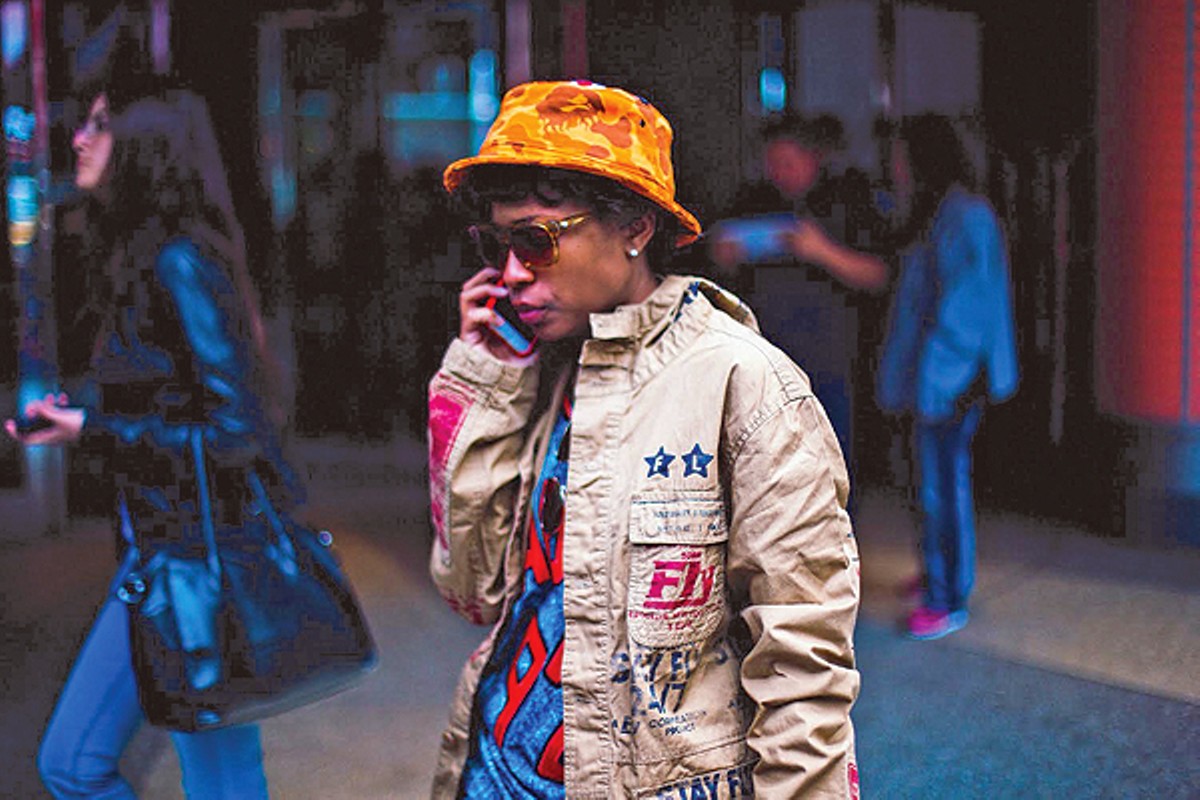 The sound engineer queues up the beat to "Try Me" for the hundredth time tonight, and Deja "Dej Loaf" Trimble begins to re-record the song that catapulted her to almost instant success on YouTube.

It's 9 o'clock on a Wednesday in Oak Park, inside Collective Studios. Dej's producers and handlers have been at it for the last few hours, coaxing her into making her breakthrough hip-hop song suitable for pop radio.

The line "Fuck around and I'mma catch a body" becomes "Mess around and I'm a whooo-hooo ..." using a melodic sing-song tone in lieu of an implied murder. Now her producer, Charlie of "I Been Gettin Money," is talking her into changing "homies" to "fellas" from the original verse, "All these niggas love me, can't get 'em off me."

In the outer room of the studio, a vending machine filled with Ciroc and Cristal quietly hums.

"This is for the white people," Charlie reminds her. "The people that control the radio and soccer moms."

We get the impression this isn't what she had in mind for her mainstream debut. While they begin to pull up older recordings of "Try Me" to keep the essence of the original intact for mainstream radio, Dej finally steps out of the recording booth.

She is weary, but after this studio session, a string of East Coast concerts, and a 106 & Park appearance over the last few months, she still manages to look on top of her game. Decked out in brand-new camel-colored Nike Air Force Ones and a Born Fly army green jacket, she lives up to her reputation as a style icon. (Many of her Instagram followers donned Dej costumes for Halloween).

"It's crazy overwhelming right now," she says. "Everything is on the go."

Despite her provocative lyrics, in person Dej is so soft spoken you have to lean in to hear what she has to say. Her voice is so soothing, she could easily sweet talk us into buying a Florida timeshare before stepping to the mic.

A day after returning from New York, she's a little worn out, but it's all part of a whirlwind trajectory that took her from mopping the floors of a suburban automotive plant to navigating the hip-hop hype machine.

Before Drake gave her a shout-out on Instagram, before performing with TI in Brooklyn, before her guest verse on Eminem's latest record, and before a label bidding war led her to ultimately sign with Columbia records, Dej Loaf was Deja Trimble, a young woman living on the east side of Detroit and working as a janitor at the Chrysler plant on 14 and Van Dyke. Nearly a year agao, she quit her job to pursue a career in rap.

Her beat-maker, DDS of Ypsilanti, had just sent over a pack of beats for her to use. One of them would later become the Internet sensation "Try Me."

"I was at [Fairlane] Mall when I came up with the concept [for 'Try Me']," she says. "I recorded it on my voice notes, the hook of the song."

From there, the 23-year-old released it to Soundcloud in April. In September, Drake quoted one of her lyrics on Instagram, "Love wearing all black, you should see my closet," jettisoning her off into the stratosphere.

The song is an anomaly of sorts, a sweet and simple beat that borders on easy listening. Coupled with Dej's insouciant voice, it sounds effortless, like she got out of bed with the words "I really hate niggas, I'm a Nazi" on her mind and spit them out lackadaisically, unaware of the consequences.

And that's where the appeal lies: her vox. Her slightly narcotized voice, when rapped with violent imagery, leaves a charming, numbing effect on the listener, like if Hope Sandoval suddenly waxed on turning her enemies into macaroni instead of counting lost loves. The song has since reached number 15 on Billboard's Hot R&B/Hip-Hop chart, but after hearing the newer sessions, crossover potential is clearly what's up.

Sensing her rising popularity and enviable Detroit street cred, promoter ILUVLOLA reached out to Deja's crew and asked her to headline Vice's Noisey showcase at CMJ a few weeks ago. The response was enormous for her New York City debut. Social media propelled her even further with basketball star Kevin Durant tweeting approval of her appearance at the show. Her mother even came onstage at the end of her performance for the song "I Got It."

Dej's family is a major inspiration for her music. When she was just 4 years old, her father was gunned down in Detroit's Freedom Place projects.

"I write about everything that's really going on," she says. "I have a couple of people close to me incarcerated, and they call and wanna talk all day."

"Try Me" gives a shout-out to her cousin Devin, who is currently in prison.

Growing up in Detroit, she took after her mother, listening to Mary J. Blige and Toni Braxton.

"Those are some of my favorite artists to listen to," she says. "Stuff like that helped mold me into who I am today."

In her downtime, Dej likes to relax with a movie. But when she recently walked in to a Wal-Mart to rent one, she was confronted with her own fame.

"People wanna take my picture now wherever I go," she says. "It's kinda hard to just go get DVDs."

Especially after going toe to toe with TI at the Powerhouse show in Brooklyn. A week before that event, she had a taste of bad social media medicine after tweeting that "Harlem Get The Flyest in NY," the backlash was almost immediate from Brooklyn and may have led to someone throwing a bottle at her onstage with TI.

"Now I can't go back to Brooklyn," she says.

Last summer, legendary Detroit rapper Royce da 5'9" reached out to Dej with a question: "'I like what you do, but can you rap?"

"He was like, 'I got this record,' and I wasn't sure if they were gonna make it. He said it would be [a track] called Detroit vs. Everybody, but I didn't know it was gonna be Eminem."

The song features Danny Brown, Big Sean, Royce da 5'9" Trick Trick, and Dej. When we spoke, she hadn't even heard the anthem yet. It's still surreal to her.

On October 21, Dej released her first full-length record in the form of a mixtape titled Sell Sole. On it, she retains her unenthused cadence and reflects on personal matters haphazardly, like speaking with a close friend already aware of her past. By the end of the mixtape, the weight of emotional brevity uplifts her casual intonation, giving listeners an intense, private view of her life.

The meteoric rise of many Internet hip-hop stars of the early half of this decade can be seen as cautionary tales about long-term success. The rapper Kreayshawn released her Internet-viral single "Gucci Gucci" to major acclaim in 2011, directly leading to a Columbia record deal. But her debut album bombed both critically and commercially.

Azealia Banks went viral with the single "212" in 2011. As a result she was signed by Interscope Records, dropped by them, then picked up by Universal. She recorded a full-length in 2012, but then begged Universal to let her go so she could release the album herself. It dropped just a few weeks ago.

Signing inexperienced Internet artists can get complicated. There's an immediate demand for new material, and the constant touring can lead to exhaustion. There's also Twitter feuds, messy promotions, and slews of moneymen and handlers.

What lies in front of Dej is tempering her newfound fame with a maturing rap persona, defying expectations of critics and fans alike. Whether that means watering down her first hit for mass consumption or pleasing her followers that already feel ownership of her.

"I have, like, a Napoleon complex, being small and people staring at me," she says, keeping an eye on her handlers, careful not let too much out.

But from what we've heard so far, we know she's staying true to her Detroit roots. "I'm showing this city so much love," she says. "I'm happy to be in this position."