The band performs in Ferndale on Tuesday 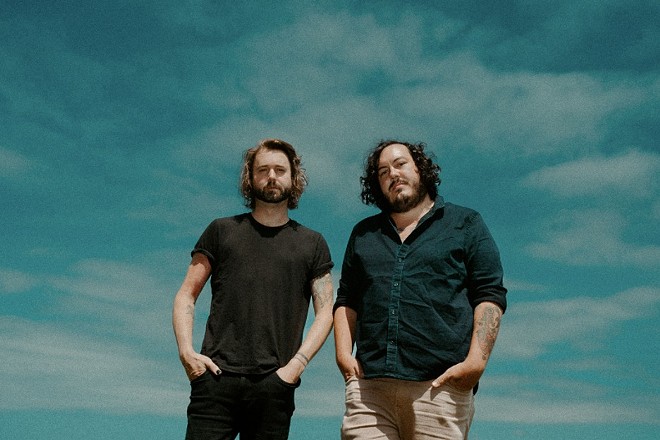 While traveling through Germany for one of the final shows before the Dangerous Summer returned to the U.S. for its fall tour, the band’s bus broke down, causing a bit of chaos and necessitating a trip by train to Hannover for that evening’s gig.

But here were singer and bassist AJ Perdomo and guitarist Matt Kennedy logging onto Zoom for this video interview with no complaints. In the big picture, they’re clearly enjoying themselves too much to let the day’s detour get them down.

They both remember all too well the years not that long ago when they didn’t have the Dangerous Summer.

“We’re living our best lives,” Perdomo says. “Every day we wake up and we remember to appreciate it. That’s the thing about having died and having come back to life again, we really, really appreciate it this time around.”

Perdomo and Kennedy, obviously, didn’t die in any literal sense. But the Dangerous Summer essentially did. The band, which started up in 2006 in Ellicott City, Maryland, while the members were still in high school, had enjoyed some decent notoriety early on.

Reach for the Sun, the band’s full-length debut album, arrived in 2009 to positive reviews and proceeded to reach No. 42 on the Billboard Top Heatseekers chart. That was enough to get the band out on a string of tours, establish an audience, and earn a trip back to the studio for a follow-up album, 2011’s War Paint, and a slot on the 2011 edition of the Warped tour.

Soon enough, though, life in the Dangerous Summer grew difficult. Kennedy, who joined the band in 2012, replacing original lead guitarist Bryan Czap, saw tensions with rhythm guitarist and original member Cody Payne grow during the making of the 2013 album, Golden Record. In March 2014, things boiled over. Perdomo quit, and the band as a whole imploded not long afterward.

“I think Cody had a pre-destined path and I think we were all in a collateral damage path that he was taking,” Perdomo says. “You know, it’s sad. He was one of my best friends at one point in time. I kind of watched him vanish from my life and kind of die from my life. … We learned that we just couldn’t live in the same universe with him.”

Perdomo settled into a life without a band, working day jobs while raising his daughter with his wife in L.A.

“I loved the life I created,” he says, adding, “I kind of loved having a nine-to-five. You know, the grass is greener.”

Kennedy, meanwhile, landed in Nashville, but missed being in an established band like the Dangerous Summer.

“I was playing with various bands and did a little bit of touring, but not much. And then I started bartending, serving, anything I could do to stay right,” Kennedy says. “I ended up selling a bunch of my old gear, which I regret now. It was fun to have a little bit of time off and be able to kind of like re-center … But yeah, after six or eight months of that, it really eats at you. You’re just dying to get back on the road, and you know you had something more tangible right there and it went away.”

Perdomo eventually started to feel the music bug nipping at him as well. And opportunity came knocking after Payne was arrested on Christmas day 2014 on burglary and other charges. When Payne was convicted and sentenced to a year in prison in 2017, Perdomo reached out to Kennedy and former drummer Ben Cato about reclaiming the Dangerous Summer’s social media pages from Payne and reuniting the band. Soon the trio was working on a new album.

The comeback album, a self-titled effort, arrived in January 2018, and the band’s mix of melodic pop and crunchy rock returned intact.

A further transition, though, was still ahead. After releasing the 2019 album, Mother Nature, and a six-song EP, All That Is Left of the Blue Sky, a year later, Cato left the band.

Deciding to push forward, Perdomo and Kennedy elevated touring guitarist Josh Withenshaw to a full band member and added drummer Christian Zawacki. The four musicians all collaborated in the writing and recording of the new album, Coming Home.

“We had a lot of time to make weird music, experiment, it was really fun,” Perdomo says. “It’s cool to really have no expectations, just do what comes out. So we were up all night making wild music. Some of it made the record. Some of it might even make a future record. Some may never be heard. We just had a good time. It’s our sandbox album. We were just having the time of our lives.”

Coming Home is another solid effort. It starts out with a trio of sturdy and tuneful, but deliberate rockers, before kicking up the energy on “Dimensional Love.” Much of the rest of the album, however, is made up of ballads. Such songs, coupled with some reflective lyrics, have had some fans remarking that Coming Home feels more downbeat than earlier Dangerous Summer albums.

Perdomo agrees, but says that’s just what came out naturally at the time. He noted the new songs the band has been writing since are decidedly energetic.

Before the Dangerous Summer gets to work on a next album, there is touring to do to spread the word about Coming Home. Perdomo said the band is touching on all of their albums in their shows.

“We’re playing a good amount of stuff from that as well as some older stuff,” he says. “We’ve been a band for a long time, so we kind of span the whole gamut. We try to kind of mix it up.”

The Dangerous Summer performs on Tuesday, Nov. 22 with Like Pacific, My Kid Brother, and Seaholm at the Loving Touch; 22634 Woodward Ave., Ferndale; thelovingtouchferndale.com. Tickets are $18. All ages.