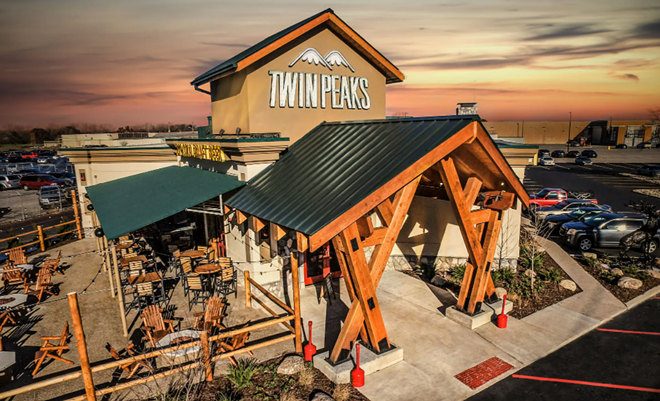 Courtesy photo
Twin Peaks is like if a Hooters was located in a cabin up north.

According to a press release, the new Twin Peaks "features 49 TVs covering wall-to-wall sporting events, capturing each game from every angle. Fans can sit back and relax in the Man Cave lounge area with a cozy fireplace to have a delicious cocktail before kick-off."

The chain also says it has a Detroit Grand Prix show car onsite.

"It's almost game time here in Auburn Hills, and we're ready to welcome the community into the lodge," franchise controller and director of development Michael Ansara said in a statement. "There's no place like Twin Peaks when it comes to enjoying an ice-cold beer and watching the game with your crew, especially if you can snag a seat in our Man Cave. We look forward to making this the next go-to spot for the Auburn Hills community to cheer on their favorite teams by creating a new home for Oakland Golden Grizzly and Detroit Lions fans."

It's the chain's fourth Twin Peaks in Michigan, following other locations in Livonia, Madison Heights, and Southgate, and its 90th overall.

The chain was founded in 2005 in Texas, known for its Hooters-esque "Twin Peaks Girl" waitresses who wear revealing lodge-themed outfits. More information is available at twinpeaksrestaurant.com.

Founded in 1983 in Florida, Hooters has been in decline for years. In Michigan, there are only three Hooters left, in Taylor, Flint, and Saginaw. The Roseville Hooters, where the famous stripper-turned-A24 movie subject Zola used to work as a waitress, closed in 2021.

Detroit’s Astro Coffee and Ochre Bakery are closing for good