Opened by sisters, the place is winning converts with its spicy takes on familiar favorites 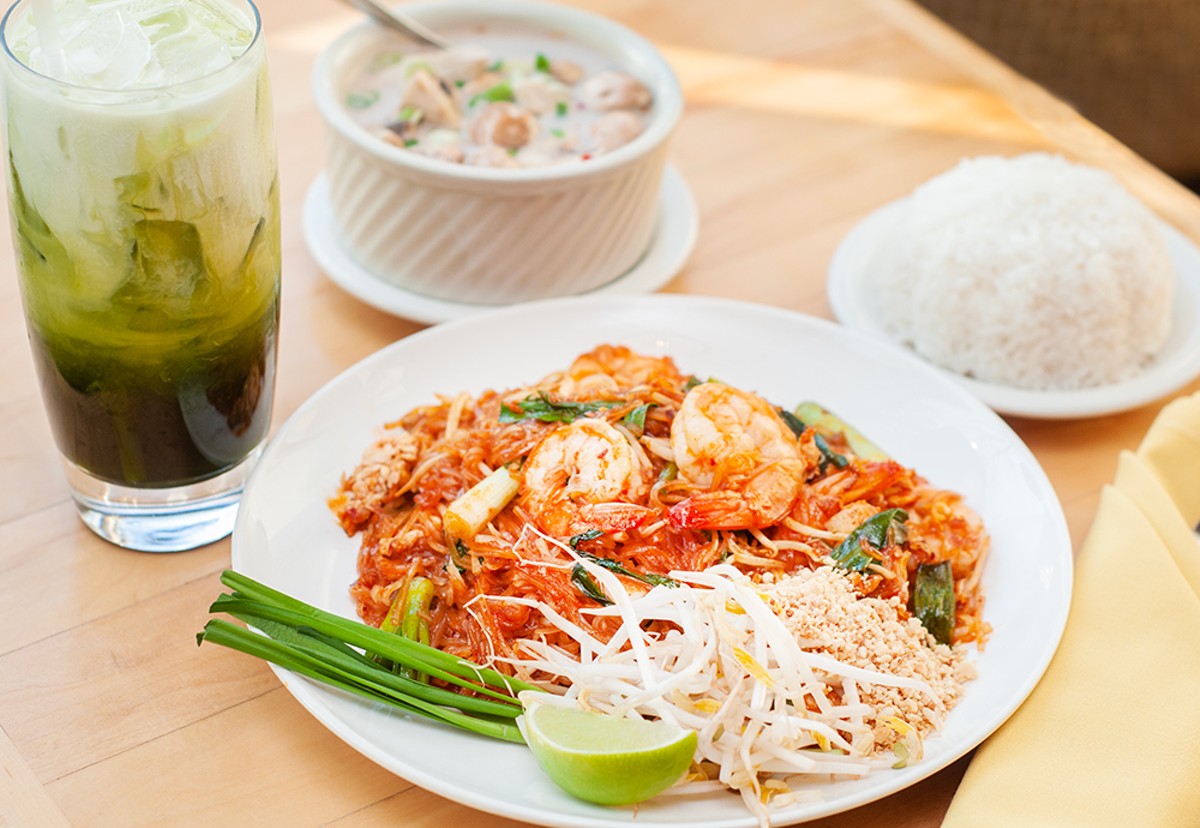 After one visit, a Royal Oakian who lives nearby immediately switched his takeout loyalty from a longstanding Thai restaurant to Saab Sis Thai. Open since January and owned by sisters Rihana and Fang Yenpanya, the place is winning converts in the crowded Royal Oak restaurant market with its spicy takes on familiar favorites.

Thai restaurants have existed in this spot, one after the other, for a quarter century, most recently a carryout-only called Thai Princess. In this — their first restaurant venture — the Yenpanya sisters have made the place lovely, with a tiled and curvy bar, wooden tables, brick walls painted cream, and lots of throw pillows. Windows are below street level, which somehow makes it more interesting to watch the pedestrians striding by.

I encountered just one dud in a list of 15 dishes sampled over two visits. There’s lots of sweetness and lots of spice.

Appetizers include all the regulars: rolls, potstickers, chicken satay. Spring rolls were skinny and fresh, with a sweet-and-sour sauce. Deep-fried wings are given a place of honor on the menu with a giant picture, indicating the owners know what Americans like. I endorse the chive pancakes, which have been formed into cubes, with a spicy soy sauce; five for $6 is a good price these days. And my very favorite dish of all was CoCo Calamari, seven big deep-fried rings with dried coconut sprinkled on and a simple mayo-Sriracha sauce. 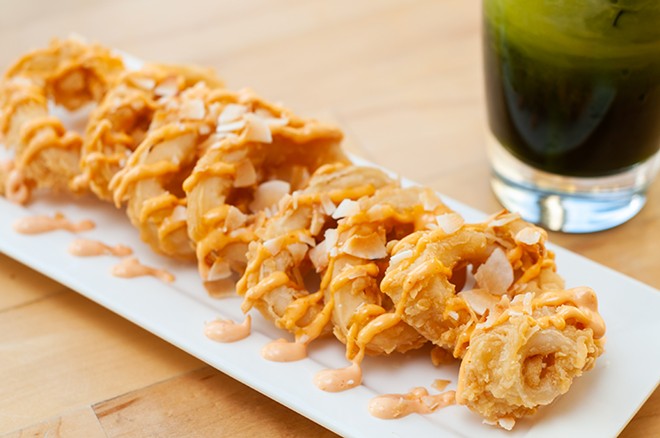 Whether to order Tom Yum or Tom Kar can depend on your mood. Tom Yum is of course tart, even sour, and citrusy, and Fang Yenpanya, who makes the soups, doesn’t skimp on the vegetables. Tom Kar with its coconut base is more soothing, creamy, and yes, sweet. Both mushrooms and the shrimp I added were perfectly cooked, with just the right amount of give.

You can of course make a meal from a large soup, but if you want a more solid entrée, all the regulars are here: curries, various noodles (pads, which means fried, and otherwise), fried rice, and some seafood dishes that at $18-$20 have the highest prices on the menu. For most, there’s a base dish and you choose your protein: tofu, beef, vegetables, chicken, shrimp, or a seafood mix.

Of these, I had three favorites. Eggplant with chicken was sweetish, soyish, and gingery all at once; it includes garlic and basil too. The eggplant achieved the perfect umami that is its specialty; all Asian cuisines seem to get this right. 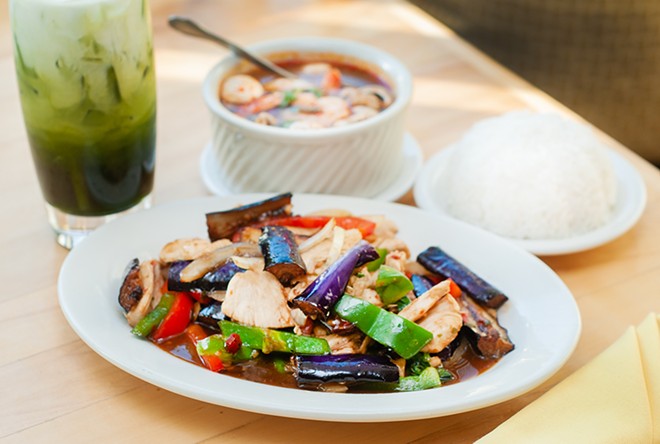 Drunken Noodles are often billed as the perfect hangover food. Though they do have a certain winy flavor (maybe that’s the power of suggestion), a better translation, I’ve read, would be “drunkard’s noodles.” You can see why — they are big wide rice noodles thoroughly soaked in garlic sauce, with veggies to give the illusion of health food. They’re just as good the next day, too, if you do hit the bar after Saab Sis Thai — there’s no liquor license here, yet.

My companion ordered his stir-fry Seafood Chili mild, and it was. Scallops competed with shrimp and clams for lusciousness.

Almost everything else was good, too. Green curry is not a pretty shade but its gravy is creamy and it includes eggplant despite being sweet. Salmon curry is a giant serving, I thought a bit dry, with kaffir lime leaves for spicy citrus notes. “Mixed vegetables with special brown sauce” contains the baby corn, broccoli and carrots you expect, very crisp, and you they don’t have to stay vegetables-only; all the meat and seafood additions are available. Pad Thai uses the requisite skinny rice noodles along with tofu, bean sprouts, green onions, eggs, and the tamarind sauce that imparts the tang.

Rihana Yenpanya says she’s worked as a server at several Thai restaurants and wants to do things a bit differently than most — “closer to the traditional way, how I was growing up” in a village near the Laos border. An example is brother-in-law and chef Jeng Chompoosak’s take on Drunken Noodles. Most restaurants use dried noodles, Rihana says, which are smaller. It costs more to order fresh ones twice a week — but the sisters wanted the big, soft kind, so they do it. And the dish is still just $14-$18.

We were underwhelmed by a banana roll for dessert, where the innards did not taste like bananas, but we loved warm coconut pudding, thoughtfully divided in four for our party. It has a clear gelatinous layer and a white creamy layer.

As you know, in Thailand people eat with a fork and spoon (knives aren’t necessary), but when a guest asked for chopsticks, the server didn’t bat an eye, and brought them right away.