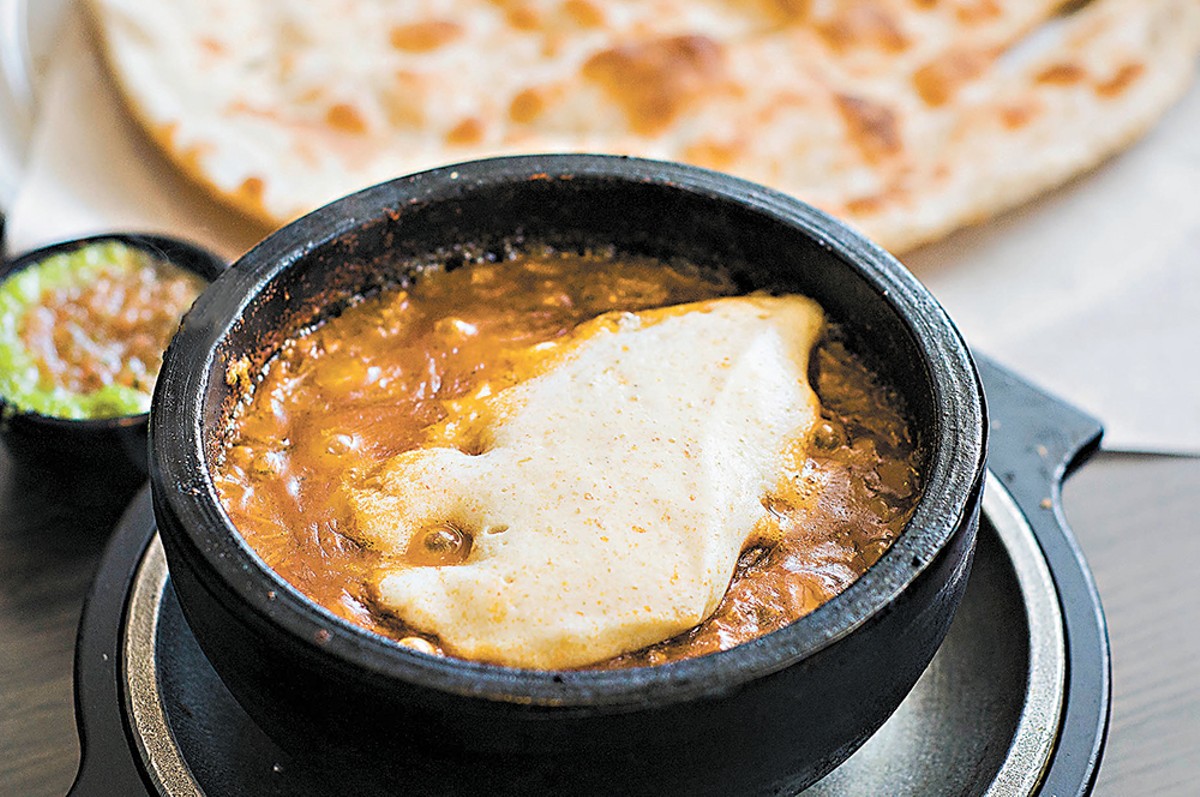 On the Remas menu, the word "Yemeni" only appears in English tucked away in a reference to bread. But maybe you don't need to say "Yemeni" about a restaurant in Hamtramck any more than you need to say "American" about a McDonald's. Owner Fahmi Alfreri estimates that his countrymen compose 55 to 60 percent of the city's population, and they make up a majority of his customers.

After opening in December, Alfreri created a modern space out of the venerable Clock restaurant in the northern part of the city, with clean lines; gray tables; black and white chairs; and glass chandeliers. A side room holds a fireplace.

He employs two Yemeni chefs, but one is a veteran of the old La Shish, so the menu is as Mediterranean (Lebanese) as it is Yemeni, and Alfreri exults that "we are nailing it" on the toum (garlic sauce). I agree. It was nailed.

Thus on different nights (or perhaps depending what the server thinks you want) what's brought to the table may vary. Alfreri told me that tea comes free with meals, but my Anglo party wasn't offered any. One night we sat down to warm puffy pita rolls, brick oven-baked, with generous toum, as you might in a Lebanese establishment. That didn't stop us from also ordering a huge round of Yemeni flatbread, called saluf for $1, and using it to scoop up our food.

I stuck with the 17 Yemeni "cultural platters," while pondering the whole stuffed lamb I could have gotten by ordering ahead. Of the traditional Lebanese dishes—shishes, stuffed grape leaves, shawarma, fattoush, tabbouli, etc.—I sampled just crushed lentil soup, a cup of which was a thick golden bowlful, mild and incompletely puréed — well worthy of La Shish.

One thing to look out for when ordering is that dishes are sometimes a lot thicker than advertised. "Soup" and "juice" sound like liquid to my ear, but the delicious Remas "mango juice" is dense as a mango lassi. Lamb fahsah, translated as "special soup mixed with vegetables," contains no visible vegetables, and only enough fluid to moisten the meat.

On the other hand, the "soup" that came with our cultural platters one night was an exquisite broth of lamb — thin but possibly the best taste on the menu and toasty with beads of golden fat. Alfreri declines to reveal its secret, but says it beats lamb soup he's tried in New York, Chicago and ... Dearborn.

Lamb is truly the delight of Remas, offered in many Yemeni varieties and also on the Lebanese side as chops or shish kabob. It can be prepared as boram, mandi, haneeth, fahsah, agdah, saltah or masloug, which involve various ways of roasting, boiling, searing, simmering, braising and combining with vegetables for stews.

My favorite — and the dish most ordered — is fahsah, in which the meat is boiled within an inch of its life with garlic, onion and spices, then shredded and brought to the table in a black cast-iron pot so hot it keeps bubbling for quite some time. The slow cooking concentrates the flavors beautifully.

Salmon fahsah was also good, though I suspect it's not treated as fiercely.

The mandi was the proverbial fall-off-the-bone tender. In Yemen it's cooked suspended in an underground oven — here the kitchen improvises.

The lone disappointment of my two visits was the "Remas Try for 2." (All single dishes would generally serve two people, by the way.) It's haneeth, masloug and chicken gallaba atop a big bed of firm but tender basmati rice, with a missable salad. The haneeth (roasted) lamb was good enough — quite tender, if plain, and the masloug (boiled) seemed the same. The chicken gallaba, though, was just a few cubes of beef and bits of potatoes and tomatoes, not integrated with a sauce. Our server apologized that the kitchen had run out of lamb for the gallaba and substituted beef. What? The oddest part was the French fries scattered over the platter, though I have seen similar presentations on Yemeni cooking websites.

Fresh juices take a page from Lebanon-in-America. Besides mango we ordered a "Remas smoothie" with strawberries, oranges and bananas, and I loved it that the berries predominated. Breakfast is variations on white, red and fava beans—fassolia and foul—seven ways. Look for falafel, hummus and baba ghannouj in the breakfast column, too.

Remas is 18 blocks north of two side-by-side competitor Yemeni restaurants on Joseph Campau, and it looks like there is room for all.