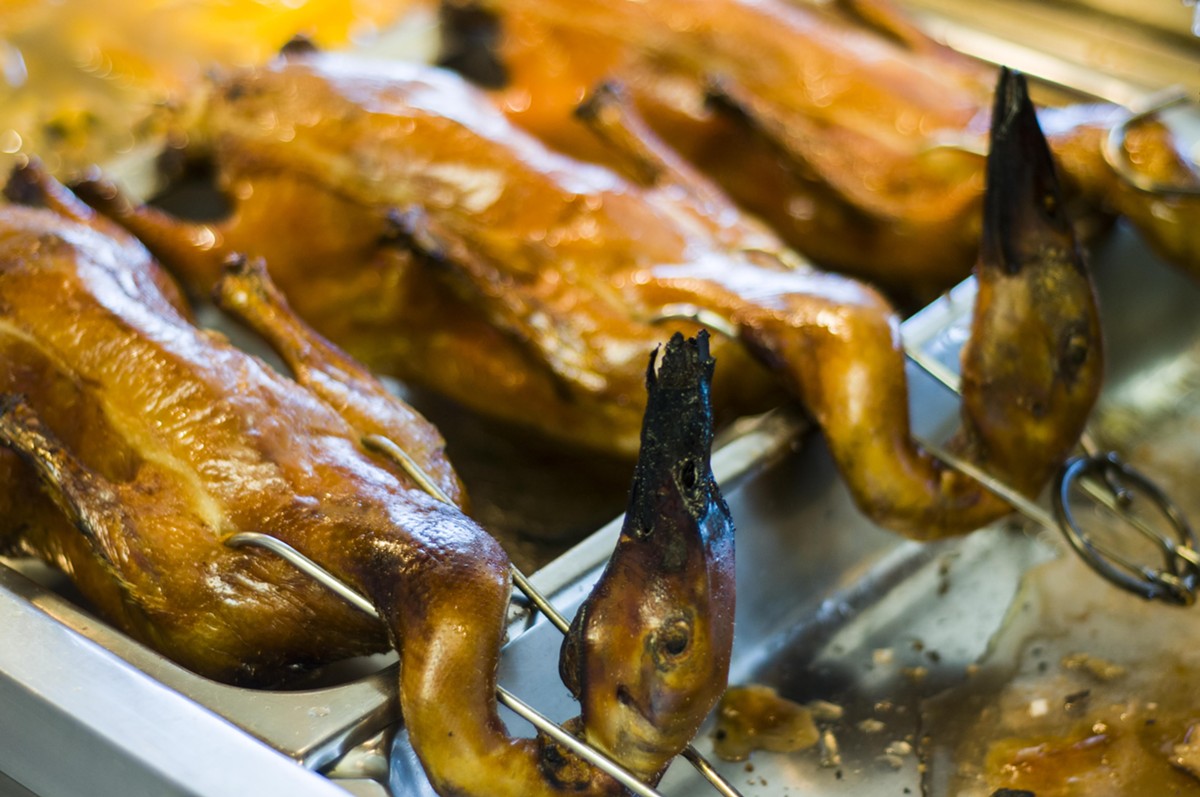 The phrase "whole beast cookery" in Detroit might conjure up, say, an image of a hip chef trying to be over-the-top precious in a fashionable Corktown restaurant. Of course, long before such a thing was a gimmick in some white dude's kitchen in the U.S., it was — and continues to be — common practice for much of the world.

At Liang's Oriental Barbeque — located in one of Madison Heights' many strip malls that contain a variety of Asian eateries — that tradition is on display in the glossy whole hogs, ducks, and chickens hanging from hooks above the counter, and the chewy beef belly, intestines, and other offal simmering in gravy steam pans.

One of the great bummers of eating in Detroit is that we lack much in the way of diversity and — debatably — authenticity when it comes to Chinese food and the cuisine of most other Asian countries. There's a lot more to Chinese cuisine than Sichuan or Cantonese, and Liang's is a rare departure from the Midwestern American-Chinese to which we're accustomed. I argue that someone would make a killing if they opened a southern China charcuterie (laap mei) spot in downtown Detroit instead of another restaurant focused on the same ol' charcuterie.

Not that all of the dishes at Liang's are unheard of, but it's definitely a different approach. The shop is an extremely basic set-up — carryout only. You walk in and point to the animal that you want. A woman with a large cleaver pulls the bird off the hook — or lops off a slab of hog — then takes it to a big butchers' block where it's quickly and unceremoniously whacked into hunks and slid into a styrofoam box.

What to do next is up to you. Chinese barbecue is commonly served with rice or noodles, but you're going to have to take it home and prepare the starch yourself. And if you don't arrive at Liang's when the beasts are hot, then you're going to have to put them in an oven. Be sure to gather your friends, as you buy by the pound or animal.

But you'll be rewarded for your efforts. Perhaps the most familiar dish is the Peking duck, which is roasted whole for an hour until it appears lacquered. The shatter-crisp duck skin wraps around hunks of moist dark meat with a deep, complex, and full flavor.

Crispy pork is another hit. The moist, sweet pork meat and crackly skin provide nice textural interplay with the fat, and benefit from a dip in hoisin sauce. The hog's head is available upon request.

Or try the electric blood-red strips of salty barbecue pork, which are stained from marinating in the sweet honey-infused barbecue sauce, then cut in strips and hung. It's an altogether semi-mellow but flavorful dish.

The big hunks of chicken that you'll receive should you request fowl are also moist, and — like the duck — aren't spiced before they're roasted. Instead, you'll rely on the bird's flavor, and in this case it should be dipped in soy sauce and the wonderful ginger and scallion slurry that Liang's prepares.

The same slurry can be applied to the spongy, chewy beef belly, and the intestines. Sadly, Liang's didn't have chicken feet in stock during my visits, but it doesn't get any points off. The owners — a husband and wife team who prefered not to provide their names — moved here from southern China in 2006. They say the vast majority of their customer base is Chinese. That's too bad — the adventurous would do well to check out their whole beast cookery.