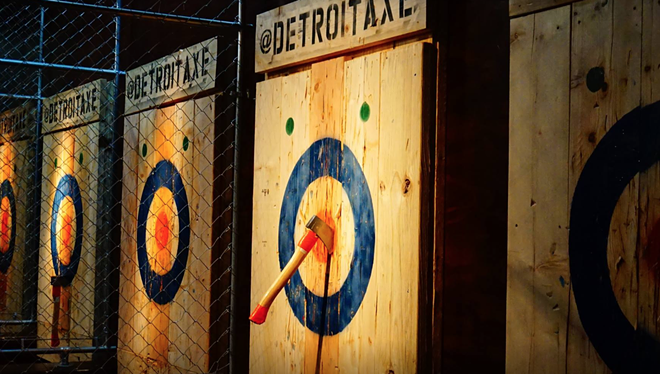 East siders can start throwing hatchets at Detroit Axe: East by the end of the month.

The Mall at Partridge Creek will soon be welcoming its own competitive axe-throwing bar that will feature 12 lanes, including two “showcase lanes” that will help patrons easily see the competition.

“We’re excited to bring axe throwing to Macomb County,” Brian Siegel, Detroit Axe partner, said in a press release. “When we considered additional locations, the fact that Partridge Creek is a first class community destination — with its many restaurants and retail — was a major plus.”

The space is set to be the second Detroit Axe location — the first was opened in Ferndale in 2017. A third location is eyeing a February opening in Corktown.

The 3,700-square-foot Clinton Township space will boast a full bar that will seat 40. The menu will include spinach artichoke dip, mac and cheese, and deep dish pizzas all served in cast iron skillets, as well as salads served in pita bread baked onsite.

Each hatchet is 1.5 pounds and thrown toward a wooden target. Patrons will be able to participate in the axe-throwing at $40 per person for a two-hour session, while walk-ins can pay $20 an hour. The space plans to keep safety in mind by separating each lane with fencing, as well as enforcing rules and safety standards.

The venue will also be available for groups of up to 120 to rent out, including recreational leagues and corporate outings.