The prix fixe menu served up by the latest tenant at the top of the RenCen is rich, but you don’t need to be to try it 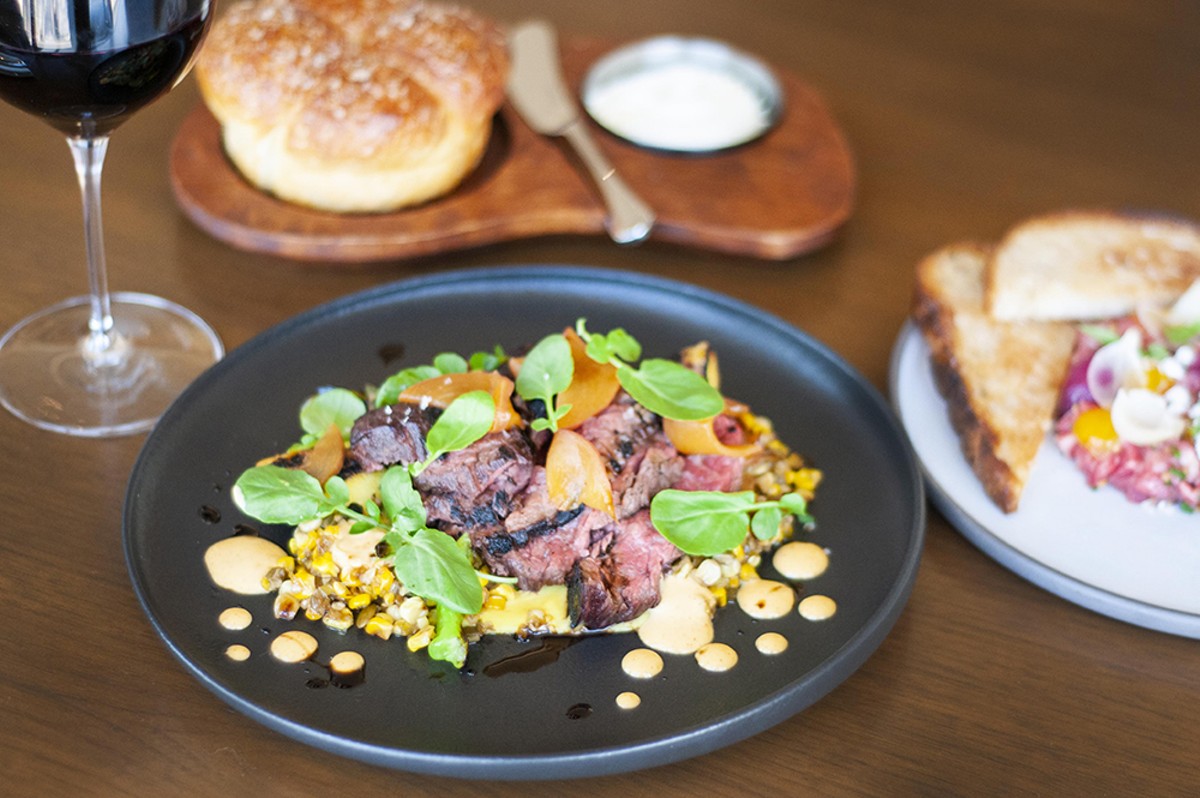 Among the words that could be used to describe each of the plates myself and a dining partner ordered from the three-course, prix fixe menu at Highlands, the latest restaurant to call the top of the GM RenCen home, are “rich” and “decadent.” Not a bad bite in the mix as chef Shawn McClain, a past James Beard Award winner, builds his extravagant menu with ingredients like black truffle, foie gras jus, maitake mushrooms, and smoked egg yolks. Umami is heavy across the board, and if you don’t exercise a disciplined pace, you may find yourself barely able to take on the third course.

Among things overheard on the elevator ride down from the top of the GM RENCEN after the meal: “I’m so full that I don’t have to eat for a month.”

Every family member and friend who has dined at Highlands in recent months has expressed some version of the same sentiment. It’s partly a product of the prix fixe menu, which offers balance and a range of selections across three courses, including less heart-stopping dishes like prosciutto and melons, or the gem lettuce. But who in their right mind is going to pick melons over, say, beef tartare? In the latter, Highlands employs a wagyu tri-tip cut, which McLain says provides the “best combination of rich and toothsome.” Though most restaurants make tartare from a tender filet, McLain says such cuts often leave the dish mushy. That’s a pet peeve of his, and Highlands’s take includes a bit more texture. It’s rendered even richer from the addition of slow cooked creamy egg yolks, and the meat is served atop a smoked egg yolk dressing. It might be the largest tartare portion I’ve encountered in Detroit.

The prix fixe menu is relatively new, instituted following the shut down during the COVID-19 pandemic. The restaurant hadn’t totally gotten its feet under it when the pandemic hit, McLain says, so it took a bit of what worked, shedded some of what didn’t, and developed the format. At $80, it’s a bargain and it was a hit, so it stayed. But Highlands also maintains a selection of the unique, reserve steaks for those who want to splurge on a singular cut of beef, like a 45-day dry-aged 10-ounce ribeye for $125.

But for those looking for range on the prix fixe, something like the wagyu bavette for a third course will still provide the steakhouse experience. McLain says he went with the bavette, which is part of the flank, because it provides a naturally beefy flavor, and isn’t a cut one often finds on menus around Detroit. It arrived under and on a mix of charred corn, corn puree, grilled peaches, and shishito peppers. 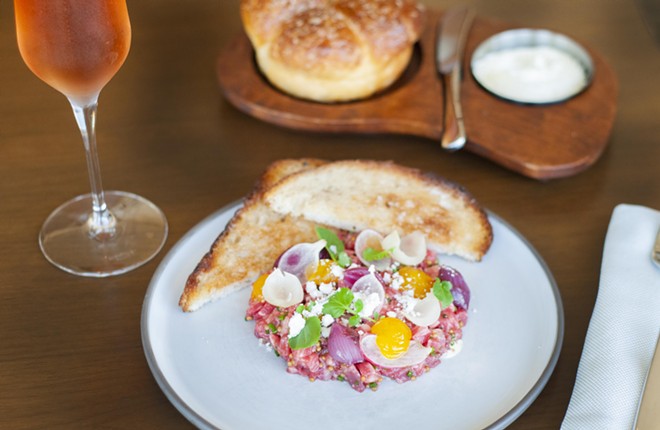 The sea scallops were among the highlights and are what McLain characterizes as a version of a signature dish he created many years ago. It rides on the combination of scallop, ox, and mushrooms that provides a richness, sweetness, and earthiness. The sauce is built with caramelized sweet onions and a carmel reduction that works with the red wine, savory scallops, and foie gras butter. It arrives with charred broccoli, maitake, hon shimeji mushrooms, and three big scallop pucks. Intensely rich.

The tuna crudo is among the lighter options. Delicate pieces of ruby tuna are served over a bed of pressed sushi rice that’s lightly crisped, while avocado puree adds a creamy element. The package is seasoned with a light vinaigrette and adorned with Fresno chili — texturally interesting without overshadowing the fish.

Highland’s crescenza ravioli is a small pillow stuffed with soft, creamy crescenza cheese wrapped in freshly made pasta sheets with minced black truffle and shallot. It’s lightly fried and topped with dehydrated maitake and oyster mushrooms, which turn up the umami and provide textural contrast. Tons of parmesan is added to the mix and hot brown butter is poured tableside over the plate to top off perhaps the richest dish of the visit.

A notch less extravagant is the wagyu short rib, a still-rich, sweet, and onion-y dish. It starts off with a light 12-hour cure then a 36-hour sous vide run. Though it’s tender, McLain says he tries to avoid a mushy piece of meat, and he succeeds in maintaining the texture. It’s served with a mix of caramelized onion bordelaise, thyme, Michigan cherries, and a bit more bourdelaise to top it off.

The wine list is extensive, and our server was kind enough to replace a rosé a dining partner didn’t love with a sauvignon blanc that she did. A reserve spirits menu offers choices like Pappy Van Winkle 10-year bourbon, and the cocktail selection is solid. Perhaps the only real issue wasn’t with the menu, but with the cleanliness. The elevator floor on the way up and down was littered, and garbage cans in the men’s room were overflowing at the end of the evening. Not the kind of bookend one expects or wants on this level of dining experience.

Otherwise, Highlands is a serious upgrade from what was previously in the spot, and perhaps Detroit’s best restaurant space offers the type of experience for which it calls.