Some of the offerings from SuperCrisp include American favorites with Asian ingredients.  Marc Klockow

The basic idea at SuperCrisp is to take American standards — hot dogs, hamburgers, fried chicken, French fries — and dress them up with a long list of Asian touches, rendering them basically unrecognizable but delicious. Think traditional faves that taste more like a poke bowl, on a bun.

Even the most traditional burger, which features American cheese and iceberg lettuce (and is the biggest burger seller), also uses katsu mayo, which Ransom says, "takes it in a completely different direction." He won't say what's in his katsu, but we can guess that it will make the diner think "Japanese."

One thoughtful touch: napkin dispensers on each table, because you will go through a lot of napkins as all those condiments spill out of their buns.

The influences are largely Japanese, often of the "how Japan adapted Western" variety. Kewpie mayonnaise, the slightly sweet, egg-yolks-only, MSG-enhanced import, is prominent. There are two miso soups.

Here's how SuperCrisp makes its karaage (ka-RAH-gay, hard g) fried chicken, according to chef John Pastore: the chicken sits for 24 hours in a marinade of tamari, soy, ginger, lemon, sake, and garlic. Then it's "floured" in a mixture of non-gluten starches and precooked in vegetable oil in a deep fryer for two minutes, and left to rest. When a customer orders, it's refried two more minutes, resulting in the super crunchy exterior that makes it so popular. The sandwich was first introduced at Ima's nearby Midtown location, and quickly became a hit. 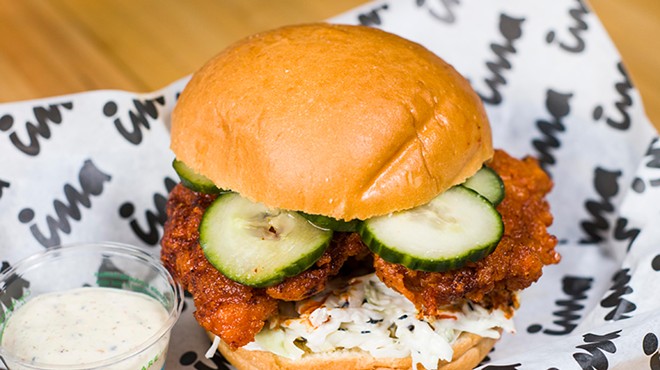 The karaage technique is applied to whitefish and tofu, too, and you can ask for a hotter version, dredged in toasted chili oil. Then Kewpie slaw, pickles, lemon mayo, and red onion are piled on. (Take home the lemon mayo if you have leftovers; it's good on everything.) The result is somehow not over the top, just scrumptious.

Ransom keeps the starch mix secret, too, saying experimentation was needed to create the right crunch and color and to stay crisp after the sandwich cools down.

Burgers are halal wagyu or veggie, and dressed with wasabi, kimchi, curry, or the aforementioned American cheese. I loved my curry burger with a sweet-ish pineapple chutney (and curry slaw and pickled red onion and ginger and curry mayo and scallions). No, you don't taste the meat, but you do get the mouth-feel. Buns are "vegan brioche" from Rising Stars Academy Bakery.

Hot dogs (halal beef or vegetarian) are Oki, Kali, Curry, and Kimchi. The very Asian-tasting kali uses Krab salad, avocado, pickled ginger, wasabi mayo, scallions, and sesame, with a nori wrap on the side. Like I said, nothing doggy about it, but I love the flavors. The kimchi dog uses vegan kimchi and American cheese.

Servings of fries are enormous, and equally tricked out. "Hot Fries" go straight to the nose, what with the ghost pepper and toasted chili, and then there's the garlic, sesame, nori, and chili-lime sea salt as well, plus furikake ranch dressing as your ketchup substitute.

Pastore says about a third of customers order the spicy items, which he pegs at 7 on a scale of 10. All sauces are available to take home: wasabi mayo, Oki, and ten more.

The staff at SuperCrisp is especially friendly and knowledgeable. The level of feels-genuine welcomingness is noticeable. One server (you order at the counter and the food is brought to you) asked me if I remembered fish sticks, and said the SuperCrisp karaage was a very elevated version of that. "If you like popcorn, get the edamame," they said. "If you like pickles, get the spicy cucumbers."

I ordered an extra egg ($2) on my fish sandwich, was asked how I wanted the egg cooked, and it came just that way.

Ransom notes that a third of his menu is fried food, and therefore he's added items to counterbalance the fat, like cucumbers with wood ear mushrooms in a Szechuan chili vinaigrette. Two salads are offered, one standard (but with yuzu miso vinaigrette or furikake ranch), the other an excellent combo of greens with quinoa, avocado, pickled onion, toasted shallots, goji berries, and sunflower seeds. Very small gripe, directed at many restaurants that serve in plastic: If the customer is taking the salad home, it makes sense to tuck the interesting ingredients in the four corners, so they don't get the greens all wet. But if the customer is eating in the restaurant, it's awkward to toss the salad in a full and flimsy plastic container, without tossing utensils.

Edamame is always fun to eat but it can be bland; not here, though, with SuperCrisp's superior garlic sesame oil and again that chili-lime salt. This was one of my favorites.

Within a few weeks SuperCrisp will have a liquor license and will sell cans of a new beer from North Pier Brewery in Benton Harbor. Ransom gave the brewers specs for a "food beer," a crisp and refreshing dry hop cold-style lager called SuperCrisp, and North Pier, he says, nailed it. It will also be on tap at all the Ima restaurants.

The SuperCrisp vibe is friendly fast food, but the flavors are oh so different.