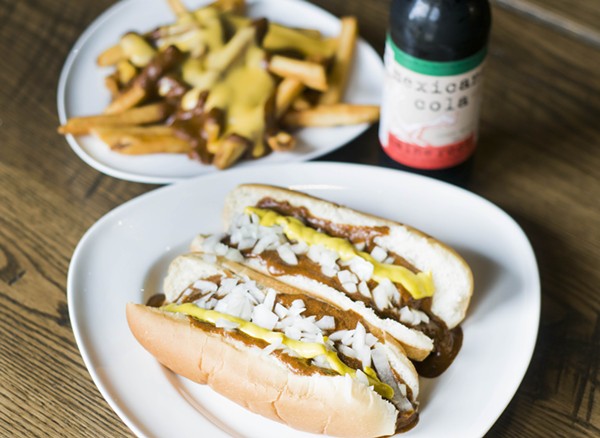 The long wait for Detroit's first vegan coney island is just about over.

Brush Park's Chili Mustard Onions is hosting an invite-only soft opening this weekend before serving its plant-based coney dogs to the public on Wednesday.

The small 30-seat shop at 3411 Brush St. offers meatless — and mostly organic — versions of many of the coney standards. There are coney dogs, chili cheese fries, a version of the Hani, a gyro, a "beetball" sub, a chicken parmesan sub, a "Big Mock," nachos, potato skins, fries, waffle fries, soft serve ice cream, cheesecake, and more.

It's one of the most original and best restaurant concepts to launch in metro Detroit in recent years, though it's been somewhat polarizing since its May 2017 announcement. Of course, vegans and vegetarians love the idea, but the town's meatheads say it's blasphemous.

"I don't care. I love it. Just keep talking about it," owner Pete LaCombe says with a laugh, noting that the ongoing debate over the merits of meatless coneys is nothing but promotion for CMO. Tom Perkins
Big Mock.
Though LaCombe and wife Shellee and daughter Darla hoped to open the shop last year, construction delays pushed its grand opening back. On a recent afternoon, as the LaCombes put the finishing touches on the space, Pete LaCombe recounted the struggles of opening up a shop in Detroit on a tight budget. He says he's relieved he can finally "take off my contractor hat."

"I'm ready to put on my chef hat and get creative, again," he says.

His recipes are creative, and many of the dishes taste like the items they're fashioned after, but LaCombe was a bit guarded when asked about specifics.

However, the measure of any good coney island is the chili, and CMO's is similar to that of National Coney Island — slightly dark, a little bit rich, and on the thin side; not spicy, but flavorful with lots of chili powder and other spices. That's ladled over Lightlife Smart Dogs, though LaCombe says he's planning to make his own dogs in house.

"I thought 'What’s the ballsiest thing you could do in Detroit?' A vegan coney island."

The gyro consists of homemade seitan with heavy cumin and Mediterranean spices, along with a vegan tzatziki. In the Big Mock, LaCombe would only say he uses a Beyond Burger blend to build the patties, and the rest of the sandwich is like a Big Mac — two no-beef patties, special sauce, lettuce, (vegan) cheese, pickles, and onions on a sesame seed bun.

The chicken parmesan sandwich is made with a homemade "chicken" patty and marinara, and the Hani is made similar to the original, but with LaCombe's "fried chicken."

CMO's Southwest Detroit Nachos are made with waffle fries that are cooked to a golden brown in organic sunflower oil, chili, LaCombe's vegan cheese sauce, blackened chicken strips, cilantro-lime sour cream, and pico, while the beetball sub holds beet-based "meatballs" under the marinara. For dessert, CMO will offer soft serve ice cream, sundaes, and other soft serve-based dishes. LaCombe makes his with almond milk instead of soy as is standard, because he says soy leaves a bit of an aftertaste.

CMO holds a liquor license and will serve beer like Michelob Ultra organic, Bell's Oberon, Short's, Bud Light, and several other bottles or cans. Customers will mix their own drinks as LaCombe is selling shot bottles and mixers, like a craft cola and fruit juices. He also offers a selection of vegan wines and a $200 bottle of Champagne for those occasions that call for Big Mocks and bubbly.

The price point is slightly higher than a coney island, but still affordable: A coney will be $5.50, while a Big Mock and fries will be in the $13 range. And it should be noted that CMO is one of the city's few almost all-organic and all-non-GMO restaurants — everything from flour to onions to mustard is organic. LaCombe couldn't find organic fries, but he made sure they're non-GMO.

"I wouldn't serve my family non-organic, so why would I serve it to my customers?" he asks. "To make money? I don't think so."

LaCombe says he went vegan around six years ago over animal welfare concerns, and also for health reasons. He grew up cooking in his grandma's kitchen and says he wasn't a fan of school, and he looked forward to closing his books and standing over the stove and chopping block. So CMO is a lifelong dream achieved, he says.

"I'm so excited. It was such an incredible journey. I feel relieved and yet this is the beginning, it's not the end," LaCombe says.