The first time I ate at AlTayeb — yes, this was not long after it appeared on the New York Times' list of 50 exciting restaurants — my dining companion was 45 minutes late, at a pretty busy time. I fidgeted and tried to look apologetic for taking up a table non-lucratively. Throughout, the waiter empathized, and the chef sent us free hummus and spicy potatoes, as though the wait had been AlTayeb's fault, not ours.

So fame had not gone to the owners' heads. The welcoming demeanor was just the same as, I'm assuming, it had been before. On a second visit, my party was given free falafel and hummus. The overall air was friendliness and general swiftness.

As in some other Lebanese restaurants, you will first be offered a plate of raw vegetables — onion, tomato, mint — with pickles and green hot sauce. Ours came with spoons, but we weren't planning to cut up the onion anyway. I have never surveyed other tables to see what they're doing with this pre-feast — sometimes it's a very large amount and includes lettuce — does anyone construct a salad on the spot? Reader, I took mine home in Styrofoam.

AlTayeb is a breakfast place that's open till 4 p.m. I'm sure it's a matter of what you grew up eating for breakfast, but I found the fava bean and chickpea dishes that AlTayeb is most known for too bland. (And who am I to talk? I eat a lot of oatmeal.) The spicier offerings, on the other hand, were excellent, enough to make my "Best Things I Ate This Year" list. And the pita chips are the GOAT. 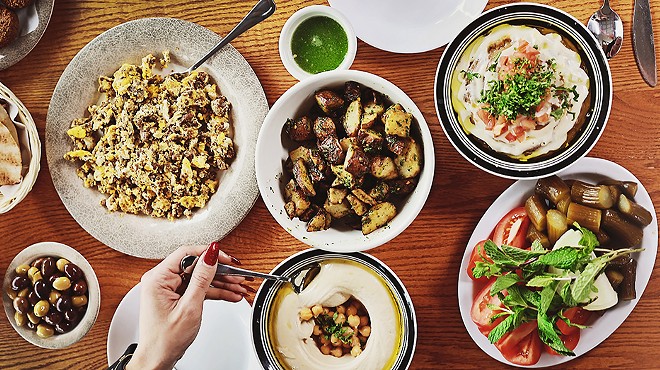 I counted eight dishes made up mainly of favas or chickpeas or both, and then more where meat or other ingredients were part of the recipe. Plain fool is both legumes together; the garlic-lemon sauce was not enough to lift it out of flatness. Likewise mshawasheh, whole chickpeas with tarator, a tahini-lemon sauce: this is good if you really like the taste of pure chickpeas.

Hummus as well, though the creamiest I've ever eaten and served with a pool of good olive-y olive oil, was bland; I like more garlic in my hummus. Other dishes in the legume category are fool with tahini, favas with hummus, chickpeas with tahini — you get the idea.

Far superior to my tastebuds was "fatteh with chunk meat." This is fried pita with chickpeas, garlic yogurt, fried cashews and beef. Tangy from the yogurt, slightly crunchy from the nuts — a dish with layers of delight. You can also get this with beef tongue, or substitute tahini-yogurt sauce for the yogurt.

Even better was harhoura, big enough to share: shredded beef, peppers, and slightly sweet onions, mellow and spicy at the same time, with a pleasant after-burn. I have to say it's greasy, and I wish some people didn't find that a pejorative. There's tahini on the side as a coolant. 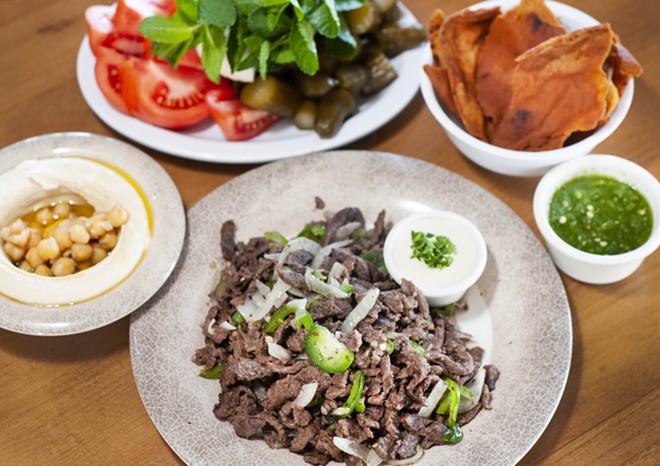 And the potatoes! You'll be spoiled ever after for French fries or hash browns. These spicy, garlicky fried chunks have a crisp skin and are seasoned with cilantro, and they are numerous.

Pita chips — it was unclear to me whether these came with one of my dishes or were another freebie — are far more than a conveyor for hummus. Their snappy flavor is perhaps owing to their dark brown, thus deeply fried, color. They're hard to stop eating.

If you order eggs, you will get five of them. The photo on the overhead screens pictures five golden yolks staring up at the diner and challenging him or her to train for a prizefight. I got scrambled instead, with sujuk, the dried beef sausage. The result was buttery and mildly spicy, not unlike eggs with chorizo. Eggs can also come with another sausage, makanek, ground or chunk beef, potatoes, or tomato and onion.

Falafel come six to an order, and they are just right, with a crisp exterior. Sesame-fried cheese slabs are pretty bland; better are cheese rolls, melted inside fried phyllo. It's interesting how so many cultures, including those with high spice tolerance, evolved a bland white cheese that kids love and that stays popular: queso fresco, halloumi, Lebanese akawi, mozzarella.

For drinks, more are listed than are offered. I hope the mango smoothie and mint lemonade will someday be real. My fresh orange juice was, of course, a delight. Turkish coffee, thick at the bottom, was "shockingly smooth," my companion said.

When I return I'll have to try more of the eggs, another of the fattehs, the baba ghannouj at an affordable $7.99, probably the potatoes and harhoura again. I'll know that portion sizes are large enough to share.