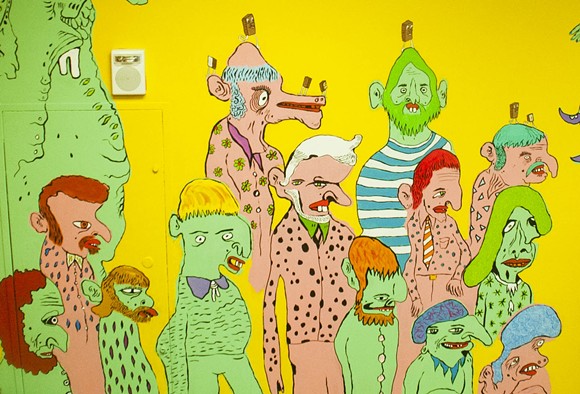 The family of 17 freaks and mutants now residing on its wall are unmistakably Easter folk, and here we find his deranged bunch hanging out with little bon-people on their heads, snouts, and noses.

Easter and Redford artist Phil Mason partnered on the project, as they did with murals at Ponyride, Found Sound, and Trinosophes. Bon Bon Bon owner Alexandra Clark lists Easter among her favorite artists and asked him to do the mural after they worked on a smaller project. And we really love that they inserted such a strange scene into Gilbert-town, an increasingly vanilla part of Detroit.

Of course, the sweetness of the chocolate shop around the Easter freakazoids brushed off on the group: "With this one it was the definitely the colors, which are pastel and candy. The mural was influenced by that whole vibe. There's always bits of the murals that are influenced by stuff around it, but it’s always my weird fucking world in my head that filters it to come out like that," Easter tells MT.

He's also planning a new mural for Neu Kombucha's Farmington location, and a second for Bon Bon Bon at the company's soon-to-open space on Joseph Campau just north of Caniff. In the latter, Easter will depict Bon Bon Bon's employees as mutants and monsters.
click to enlarge