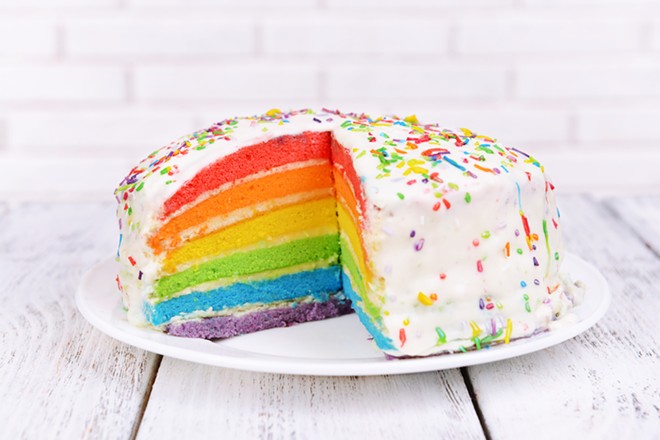 A man tried to troll a lesbian Detroit baker into making a cake with a hateful message on it — but lost at this game of chicken.

David Gordon, an employee of Ferndale's alt-right Church Militant media group, appears to have thought that April Anderson of Good Cakes and Bakes on the Avenue of Fashion would not actually make the cake.

She did, but he never picked it up.

Anderson told Between the Lines that Gordon placed an online order on July 19 for one of her red velvet cakes. The order requested the words "PRIDE," leading Anderson to initially think that it was a belated cake for Pride Month. But upon further inspection, Anderson realized Gordon was being a dipshit.

"I am ordering this cake to celebrate and have PRIDE in true Christian marriage," the order read. "I’d like you to write on the cake, in icing, 'Homosexual acts are gravely evil. (Catholic Catechism 2357)'."

With the help of a friend, Anderson found out that Gordon worked for Church Militant, a radical far-right media company that was the subject of a 2017 documentary published by The Atlantic. Gordon even penned a recent article for Church Militant titled "The Gay Rainbow is a Mark of the Beast."

Anderson told BTL she was taken aback by the request, but realized she had an easy out — company policy stated that they don't do custom decorating for online orders.

If Gordon wanted his homophobic message, he'd have to ask her directly.

The day before the scheduled pick-up, Gordon even called to make sure the cake would be ready. So Anderson went ahead with the order, but without the message, and included a letter by her stating that she and her business stand against hate.

"We feel the only 'grave evil' is the judgement that good christians, like yourself, impose on folks that don't meet their vision of what God wants them to be," the letter said, The Detroit Free Press reported.

Not only that, but she got dozens of people from the community to rally in front of the building the day the order was supposed to be picked up.

But Gordon never showed up. After a few days, Anderson threw the cake away.

Of course, Gordon — a straight white male who is a member of the world's largest branch of Christianity — thinks he's the one who is somehow being discriminated against, not the Black lesbian from Detroit.

"I was denied the services I requested at a place of public accommodation on the basis of the content of my beliefs..." Gordon told the Freep. "Imagine the umbrage if a homosexual couple arrived at their 'wedding' reception to find a Christian baker had made them a 'straight' cake. This is about fairness, not ideology."

Buddy, we're not sure what a "straight" cake would even look like.

Anyway, legal experts believe that regardless of Good Cakes and Bakes' company policy, Anderson was likely in the clear because forcing her to write the message could be considered "compelled speech."

Just as freedom of speech protects free expression, it protects an individual from being required to express a thought with which they disagree.