A growing number of Michigan Starbucks workers are moving to unionize 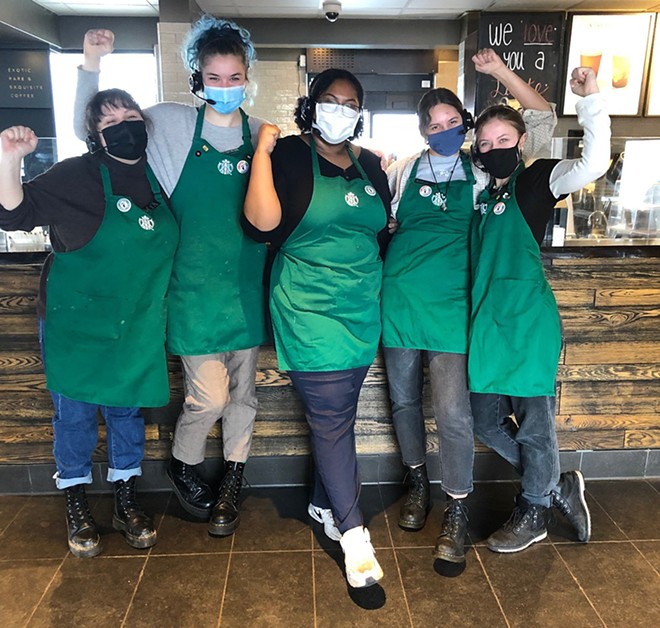 Workers United - CMRJB, Twitter
Workers at an East Lansing are moving to unionize.

Following the success of Starbucks workers in Buffalo, New York, forming the coffee chain’s first-ever union at a company-owned store in December, more and more workers at other locations across the country are moving to do the same.

In Michigan, that number is growing. In January, workers at four Michigan Starbucks locations — two in Ann Arbor, one in Clinton Township, and one in Grand Blanc — filed petitions for union elections with the National Labor Relations Board. In the weeks since, that number grew to eight, with three more in Ann Arbor joining, and one in Lansing. And on Monday, stores in Flint, East Lansing, and Grand Rapids announced they had also joined.

The Starbucks Workers United movement is being organized by the Workers United, an affiliate of the Service Employees International Union.

It is perhaps unsurprising that many of the stores are in Ann Arbor. Starbucks has long been known for its progressive values, calling its employees “partners,” and the home of the University of Michigan is quite possibly the most liberal bastion in the state.

The effort in Michigan was kickstarted in part by Sasha Anisimova, a 25-year-old barista at one of the Ann Arbor Starbucks stores. She tells Metro Times that the success in Buffalo inspired her to join the movement.

“When the Buffalo news broke, I started taking it way more seriously than I have in the past,” she says. “When I saw the news about the Buffalo Starbucks location unionization, the fact that they were successful was the critical part.”

It turned out that other workers at other stores were feeling the same, and union cards were disseminated quickly.

“They were very close to filing when my store filed,” Anisimova says of workers at the other Michigan stores. “The news gave them a boost to get the last few cards.”

Anisimova says she has also been a member of the United Auto Workers and the Industrial Workers of the World.

“I’m pretty familiar with labor organization,” Anisimova says. “I’m a big advocate for workers’ rights. I think all workers should have that collective bargaining power, to kind of balance the power between them and their managers. I’m just a huge advocate for anything that protects the worker in the end.”

She was also following the closely watched unionization effort by Amazon employees in Bessemer, Alabama, last year, which was unsuccessful after the company campaigned heavily to dissuade its workers from approving the union. However, another unionization vote is in the works in Bessemer.

Anisimova says that Starbucks' reputation for having progressive values — it has launched environmental efforts over the years, including a recent pledge to ban plastic straws, as well as fair trade and humane farming practices — led to her deciding that a union would be best for her.

“Actually working in this environment, it is a weird dissonance that we get called ‘partners,’ and we get told how great our benefits are, and how great it is to work [here], and we’re such an ethical company, and we’re so accepting of all these different communities,” she says. “But in the end, it’s not really much different than any other fast-food job I’ve worked, except we have higher standards, because it’s Starbucks coffee. It’s kind of like a steeple of the upper-middle class.”

She says the use of the term “partner” within the corporation helped instill a sense of solidarity with her fellow workers.

“I definitely, I definitely think that it plays in our favor a lot that they do call us ‘partners,’ because my teammates, we see each other as partners,” she says. “Anyone on my crew, I definitely trust a lot. And I see it as almost like a family type of thing, so that’s kind of played into how we were able to get so many cards so quickly. We all look out for each other. And I guess that’s the unintended effect of calling us ‘partners,’ because we don’t feel like we’re partners with the managers, but we still do feel like we’re partners with each other.”

“Now that we have this labor shortage, we finally have the leverage we need. I think that’s the big thing.”

The straw that broke the camel’s back may have been the COVID-19 pandemic, however.

“I believe it really did give people a chance to step back and realize, ‘What am I wasting my time doing?’” she says. “I think that’s really what it is. I think people, they had maybe a few months off work and realized it was the greatest time of their life. They got some stimulus checks, and finally caught up on bills they probably have been trying to pay for 5, 10 years, even. They really got a taste of the better wife and realized, honestly, we’re in a pandemic. It feels chaotic. Some people say ‘apocalyptic.’ People don’t want to spend their time miserable at work, they want to explore what their options could be. And now that we have this labor shortage, we finally have the leverage we need. I think that’s the big thing. Companies can’t fire you and grab some temps or some scabs or whatever it may be in trying to fulfill that work anymore. They need us. They really need us.”

She describes the pandemic as akin to a “global natural disaster.”

“We have to make sacrifices every day,” she says. “I think part of that is people have a much higher risk tolerance.”

About a decade ago, in the aftermath of the Great Recession, Anisimova says she thinks workers were just grateful to have a job and wanted to tread lightly — and corporations knew it.

But now, “There’s nothing to lose here,” she says.

Like the Amazon effort, Anisimova says she and her fellow workers are bracing for Starbucks’ corporate office to start their union-busting campaign.

“We have had new managers in and out of the store and they've been doing 1-on-1 talks with partners,” she says. “I suspect this is going to progress further very soon. I recently talked to a partner from the Buffalo stores and was told to anticipate captive audience meetings and changes to the store to try and persuade us that a union isn’t necessary, or to make us feel like things are already improving.”

But Anisimova thinks the movement is bigger than individual Starbucks workers at specific stores.

“That’s what’s so great about movements like this, and these younger generations, is they’re starting to undo the damage of years and decades of anti-union propaganda,” she says. “It’s cool. I see, right now as being the start of a labor movement that’s been overdue for a long time. It makes me really proud of my peers, and it makes me really proud of the people younger than me, because they’re the ones who are leading this.”

Workers at local chain Great Lakes Coffee are also moving to unionize, with more than a dozen workers going on strike for union recognition.