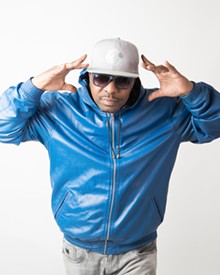 When you think about the pioneers of Detroit hip-hop, no one quite compares to Esham A. Smith. As Esham, the then-16 year-old rapper released his iconic first album, Boomin Words From Hell, in 1989 under his Reel Life Productions imprint, at the depths of Detroit's crack epidemic. A fusion of hip-hop and rock, with lyrics that were dark, gritty, and full of shock value, the record arguably offered as much to Detroit's musical fabric as Motown. Dubbed "acid rap" and "wicked shit," Esham's style has been imitated by countless others, and Boomin Words From Hell served as the cornerstone for a career that would go on to span more than 35 more records across LPs, EPs, and mixtapes.

At 46 years young, Esham has no plans on slowing down. On Devil's Night, he performs as part of rap supergroup Soopa Villainz at El Club. On Halloween, he'll perform as part of the lineup for Hallowicked, which also features Psychopathic Records labelmates Insane Clown Posse.

Esham's influence is no exaggeration. "When I first started putting out records, there wasn't no Detroit rap music scene," he says by phone. "We made the music scene. Everybody now is benefiting from the scene we put together."

Though he has a loyal following that extends internationally, at times Esham says he feels invisible in his own city, however.

"I've been in business almost 30 years and I'm all over the world, but I'm the most unknown motherfucker you'll ever meet," he says. "I got a passion for hip-hop and music in general, and I feel like I still have a lot to prove. I'm the underdog, people love to hate on the underdog. People from Detroit feel like they got to keep me down."

Despite this — and even though his lyrics come from a dark place, and that he split his time growing up between Detroit and New York City — Esham remains a Detroit booster.

"I stand on the side of righteousness with Detroit, and I'm not selling my fucking city out," he says. "I hate an ignorant artist that don't know their own musical history. This is why when Detroit artists get in the public eye, they start sucking everybody dick in the industry and making the city look bad. It's a lot of them out there boot-licking and butt-kissing. This is a blue-collar town, we're hard workers, and we ain't lookin' for no handouts. They don't live by the code. I'm from a different era where the code meant everything."

"People don't know their real Detroit history," he says. "My music is Alice Cooper, it's Iggy Pop ... even Aretha Franklin. But people just want to put me in a box. The sound of Detroit is my sound. The spirit of Detroit is the wicked shit."

Esham has also been able to navigate the changes in the music business. Since he's started, his albums have gone from being sold out of trunks of cars to being digitally downloaded. His style was temporarily hijacked and called "horrorcore," and several national artists began to refer to their own music as "acid rap." Through it all, Esham has maintained his brand, but has also adapted as needed. "A lot of the game that's out there, people are reading out of our playbook," he says. "The music business has changed a lot. It was challenging, but you got to change with the times. A lot of people in Detroit was not selling no records ... I think a lot of people lost a lot of the education of the music business and being an artist. It's a lot of education missing. The difference between me and them is a lot of these artists today have help coming out. I didn't have any help."

Although he doesn't perform as much as he used to, Esham promises his show will be crazy.

"My shows are bananas, man!" he says. "My shows are what any artists would dream of. You got people there from all over the country and flying in from other places in the world because it's rare when I perform. It's a musical madness up there, and it's so Detroit!"