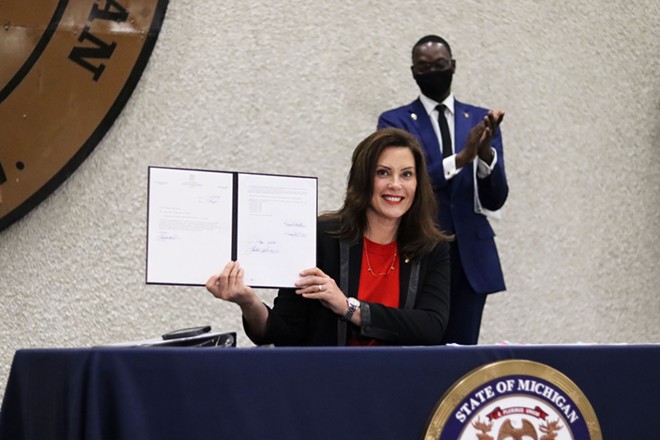 Nearly two years after Michigan residents approved the legalization of marijuana, residents convicted of many pot-related crimes now have an opportunity to clear the offenses from their criminal record.

Gov. Gretchen Whitmer signed a package of bills on Monday that provides a fresh start for up to 235,000 Michigan residents with pot-related convictions. Marijuana convictions can be a barrier to accessing jobs, loans, housing, education, and some public resources.

The legislation is one of the most comprehensive in the nation, allowing for expungements of misdemeanors and some low-level felonies.

“During my 2018 campaign for governor I made expungement of marijuana charges one of my key priorities, and I’m so proud today that we can follow through on that goal,” Whitmer said at a press conference. “For too long, criminal charges have created barriers to employment, barriers to housing and others for hundreds of thousands of Michiganders. These bipartisan bills are going to be a game changer.”

The “clean slate” bills offer two paths to expungement. For people convicted of marijuana offenses that would have been legal after marijuana became legalized on Dec. 6, 2018, they can apply to have their convictions removed from their records under a streamlined process. A prosecutor would have 60 days to protest the expungement if they want to block them. In that case, a hearing would be set.

For others, the legislation requires the state to automatically expunge misdemeanor and low-level felonies beginning in 2023. Misdemeanors would be cleared seven years after sentencing, and felonies would be expunged 10 years after offenders complete their sentence.

“This is a historic day in Michigan. These bipartisan bills are a game changer for people who are seeking opportunities for employment, housing, and more, and they will help ensure a clean slate for hundreds of thousands of Michiganders,” Whitmer said. “This is also an opportunity to grow our workforce and expand access to job training and education for so many people.”

The automatic expungement also applies to convictions not related to marijuana. Offenses that aren't eligible for expungement include assaultive crimes, human trafficking, serious misdemeanors, “crimes of dishonesty” such as forgery, felonies that carry a maximum penalty of 10 or more years in prison, and crimes in which the victim is injured or is a minor or vulnerable adult.

“This is the right thing to do on behalf of people everywhere who deserve another chance, and will help improve livelihoods,” Lt. Gov. Garlin Gilchrist II said. “There is more work to do, but Michigan has now established itself as a leader in removing barriers to economic opportunity for people who have made mistakes. I will continue to stand tall for Michiganders across the state who need someone in their corner.”

“I can tell you from first-hand experience that the expungement process in our state was in serious need of reform,” Nessel said in a statement. “We not only needed to expand the types and numbers of offenses that could be eligible for expungements, but we also needed to make that process more accessible to our residents. This package of bills accomplishes both of these missions and that is why I consider it a step forward in Michigan’s effort to implement lasting criminal justice reforms.”

The bill drew applause from Michigan Liberation, a network of organizations opposed to the crimination of Black families and communities of color.

“Michigan’s clean slate bill will help pave the way for thousands of Michiganders to finally be liberated from the lifelong barriers that accompany a criminal record,” Marjon Parham, public relations manager at Michigan Liberation, said in a statement. “At Michigan Liberation, we have bailed out so many people this year. We are happy to see that these individuals will be given a second chance at living a normal life. Having a clean record is so imperative when it comes to the necessities of life like getting a job.”