The Lost Boys (soon to be Prude Boys)

The band — in the middle of a name change — will make an appearance at Blowout. 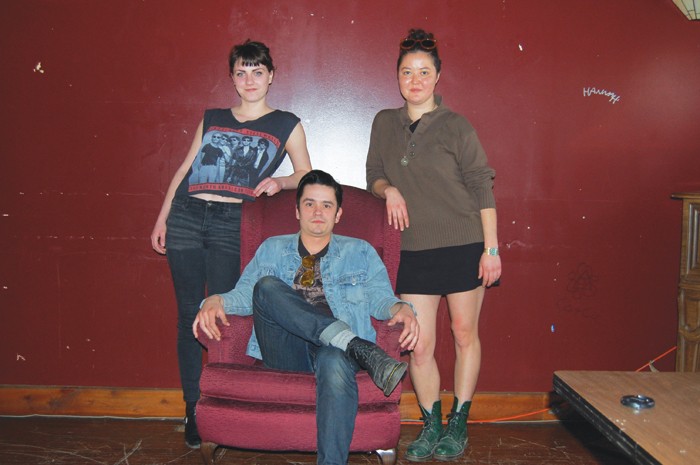 Wouldn’t you just know it? We decide to give the members of this band the City Slang treatment before their Blowout appearance — since we were so impressed by them at a recent Loving Touch show — and they tell us that, immediately after the festival, they’re changing the band’s name. It’s all a little confusing so, to clear things up: This band will be billed as the Lost Boys at Blowout. After that, look out for the Prude Boys at local venues. The group is still officially called the Lost Boys, so we’ll be referring to them as such during this interview. Damn the awkwardness of it all.

Whatever the trio wants to be called, it really is a great band. Essentially, Quennton Thornbury (guitar, vocals), Caroline Myrick (bass, vocals), and Sadie Slam (drums) plays garage-y punk rock. That’s the gist of it, and you could be forgiven for thinking, “Oh, not another fucking one.” However, these guys play with such energy and an irresistible sense of fun that the music doesn’t sound tired, tried and tested at all.

The lead vocals are shared between Thornbury and Myrick; sometimes they sing individually, sometimes they scream together, and all three options sound great, offering a touch of variety. Behind them, Slam stands at a sparse kit, beating the crap out of those tubs but never losing rhythm. Slam says, “I tried playing a whole kit and sitting down, and it’s just not as much fun.”

“We were just talking about how people have been sitting down at their kit for years, so why not switch it up?” Thornbury says. “I know other bands have done stand-up drums, but it’s just a fun little difference. She’s got a sense of rhythm, man. She’ll switch it up.”

The Lost Boys formed a year ago, when the three musicians (all in their mid-20s) just sort of drifted together at a friend’s attic space. Slam lives in Ann Arbor, which is also where the band practices. Thornbury and Myrick, a real-life couple, live together in Hamtramck. The two of them are the wild rockers of the group, while Slam has taken on a sort of motherly, angel-on-the-shoulder role. She’s the one that will make sure they all drink lots of water after a night of hard drinking. “Sadie’s the person in the band who tells us if the song is good, bad, or she hates it,” Myrick says.

Thornbury, who also plays bass in the band Double Weirdo (also playing Blowout), is a badass guitarist, able to switch between pulling the weirdest, wackiest noises from his ax one minute, and then keeping it simple while singing the next. Myrick is an unrelenting, technically gifted bass player, which is only surprising because she carries herself with a vibe of punk apathy. Don’t believe the slouch for a second – these guys are committed and they give a shit. It’s that drive that led them to embark on a tour early in their career, largely playing to bartenders — and no one else — around the country.

“We went on a tour with Quennton’s other band, Double Weirdo, and we did a bad job booking,” Myrick says. “We didn’t really book any local acts with us. We went to Ohio, Philly, New York, Baltimore, Kentucky, and a suburb of Chicago. It was us and Double Weirdo, two bands, in a minivan. We were missing the middle seat because that’s where the drums went. It was pretty intense. I don’t think we got paid a single night. We got paid in like sandwiches and beer.”

So, like we said, the Lost Boys is changing its name to the Prude Boys. The trio justifiably thinks it’s amusing to call the band “boys” despite the fact that two of them are female. The “prude” bit comes from Slam. “We call Sadie a prude a lot,” Myrick says. “She’s the one person in the band who actually thinks we go over the top. Quennton and I would just go forever. Sadie brings all the whiskey, but she’s still a total prude.”

The decision to ditch the “Lost Boys” moniker came when they realized that they were practically unsearchable. Look up “Lost Boys” and you’ll find all manner of information about Peter Pan, and the ’80s Kiefer Sutherland vampire movie. “There are loads of rap groups called Lost Boyz,” says Thornbury. “There’s ‘The’ Lost Boys, and there’s a Californian boy band called Lost Boys. There’s a hardcore group from the ’90s out of Europe called Lost Boys. Blowout will be our last show as Lost Boys. May 5 is our year-anniversary, so that’s the official name change date.”

As of right now, the band has just one EP available on cassette, but they plan on changing that soon. There are six songs on that EP, and the soon-to-be Prude Boys have eight or nine more ready to record. For now though, they’re happy to keep playing 20-minute sets. “We’ve seen so many bands that take up their whole 35-45 minute slot and by the end of it, you’re just like, ‘Oh my God, get the fuck off the stage,’” Myrick says. “It doesn’t matter how good you are, I don’t know who you are and I’m bored.”

The band has never played Blowout before, and Myrick and Slam have never attended the event at all. Thornbury did go once, as a naïve (and apparently sneaky) 17-year-old, though he remembers nothing about it. “It’s not going to be the same set we always play, but we want to keep it short,” the guitarist says.

One of the great things about Blowout is the ability to check out new bands in between some of your faves. So wander over to see the Lost Boys and, well, forget the name. You won’t be disappointed, just a little confused.