Writer and director Martin McDonagh makes no space for mystery, thumbing the scales on each of the film’s questions 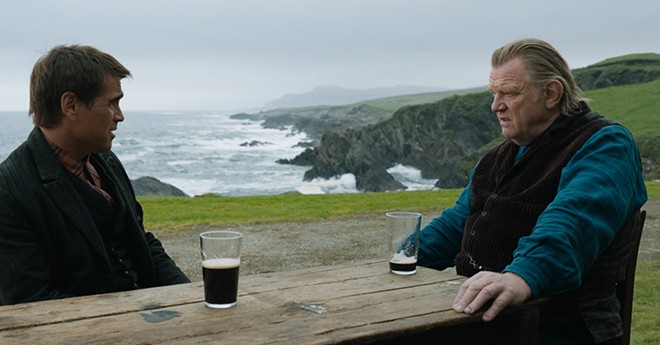 Jonathan Hession, courtesy of Searchlight Pictures
Colin Farrell and Brendan Gleeson in The Banshees of Inisherin.

The nominal questions of Banshees of Inisherin would be relatable if the film actually retained them as their focus. “I do worry that I’m just entertaining myself while I stave off the inevitable,” remarks Brendan Gleeson as Colm Doherty early on, a sentiment that pertains for any film viewer and ultimately everybody else. Opening to the introduction of a sudden rift between two small-town drinking buddies who’ve been so regular at their local bar they’re effectively conjoined, the two find they disagree on how they’ve spent their time each day. While Colin Farrell’s Pádraic Súilleabháin insists that each day at the bar they’ve been doing “good, normal chatting,” his old friend Colm decides one morning he’s had enough, arguing that they’ve long occupied themselves with something more depressing, superficial, and morbidly distracting instead. The difference in real life between these poles tends always to be arguable — less rooted in a substance than a feeling. But writer and director Martin McDonagh makes no space for even this to sustain itself as a modest form of mystery, thumbing the scales on each of the film’s questions, leaving his viewers for the film’s duration mentally unemployed.

In broad terms, Banshees of Inisherin’s concerns are existential, making it a would-be drama of anticipatory waiting. But McDonagh lacks the patience for that, introducing crass and hurried escalations of his plot, affecting the trappings of both taste and delicacy as he does.

Part of that depends on setting. The film, once meant instead to be a poorly written play, situates itself off the coast of Ireland, in the fictional and folksy town of Inisherin in 1923. Lending the film some heavy regional dialect, traditional names, and the faintest sense of history, a whiff of political seriousness can easily be caught through it all across the water, whisking away the veil of Banshees’ false modesty.

No stranger to insistent politics, McDonagh opts for something quieter but no smarter here, with the sounds of gunfire from the then-ongoing Irish Civil War carrying between two shores. Drawing a blunt parallel to the unkind actions of two embattled friends, McDonagh pulls this conflict in from history to the film’s periphery to achieve a sense of scope and clout. Like the mainland, the film’s small island is suggested to be riven not only by winding stone walls — but by the brute reality of conflicts between neighbors who might have solved things more peaceably.

But the bulk of Banshees’ focus is more intimate in scale, focused on the triangular drama between Colm, Pádraic, and Pádraic’s sister Siobhan (Kerry Condon), who serves as a voice of reason and a mediator of the fresh conflict between the two embattled men. Such roles make familiar burdens for most any actress, and despite Condon’s efforts, her role serves to do little but accent the obvious childishness of the two former friends. While she plainly isn’t wrong, her declarations of their shared stupidity do little but underline the question of why these characters — whose words, relationships, and psyches as written offer no real space for fruitful ambiguity — should be the object of a work such as this.

But the answer, ultimately, is McDonagh’s crassness — and the film’s key dramatic accelerant is all the proof one should need. Recalling Three Billboards’ bursts of histrionic violence, this one involves a threat issued early by Colm that, if Pádraic pesters him any further, he’ll inflict upon himself continuing and serious, quite gruesome, and specific forms of harm. McDonagh loves little more than to have a character say they will do something, or that something should happen — and then, through writerly authority, make it so. I’ve never seen a limper twists of plot than the moment in Three Billboards in which Frances McDormand’s character Mildred tells her daughter “I hope you get raped” only for her then (spoiler, I guess) to find her not only raped but killed. In what passed for some there as dramatic irony, the revelation wasn’t the murder (that was the film’s premise) but the notion that Mildred had almost, through a kind of foul sentiment, managed to bring it upon her.

As then, in that case, the anticipated injury here proves both grievous and visible (but not ultimately deadly), with the clear intent being to dramatize the harm which Farrell’s bleating sad-sack lead inflicts on Gleason by forcibly re-entering — and re-entering, and re-entering — his life. Having already highlighted the capacity (already stated in dialogue) for those who think themselves too nice to actually be mean, McDonagh can’t help dramatize it further by having the injury imperil Colm’s practice of songwriting: a vocation which offers — aside from a calendar-ready dog — Colm’s only real source of joy.

Seeking a kind of moral balance, McDonagh’s script assigns each man a pet (Pádraic gets Jenny, a miniature donkey) as a sign of their ultimate, sadly neglected capacity for tenderness, engaging in a manipulative emotional shorthand fit for a sociopath. The film’s style isn’t any better at masking a sense of naked calculation, heaped with drone shots of verdant paths and coastlines spliced in at every chance: a way of working the best assets the film has. Worse still but just as common, McDonagh pads the story with interstitial shots of animals in a way meant to express a kind of deeper softness, swiping meanwhile from Terrence Malick. But the expression may as well have been grown in a lab and piped in through a syringe — there’s nothing organic or even human about its nominally emotional appeal.

The film’s whole running time oozes this same sense of deliberation, just as visible but far more vexing than the closeups we’re force-fed of Colm’s self-inflicted wound. But mountains of this kind of deliberation do not amount to discipline, something McDonagh lacks in both a sense of reserve and approach to form. While dreaming of being Samuel Beckett and Flannery O’Connor both at once, he lacks the skill, balance, and basic command of craft in his own medium to nip at the heels of either. Sweating the silly question of whether we might all be nicer in lieu of engaging with the politically or emotionally real, Banshees finds itself shackled to and wailing about the obvious: something that, through his eagerness to pander, McDonagh appears on some level to know. Calculated yet clumsy, insecure but striving, his fixation on niceness betrays a fixation on how enemies — or critics might gently measure their words.