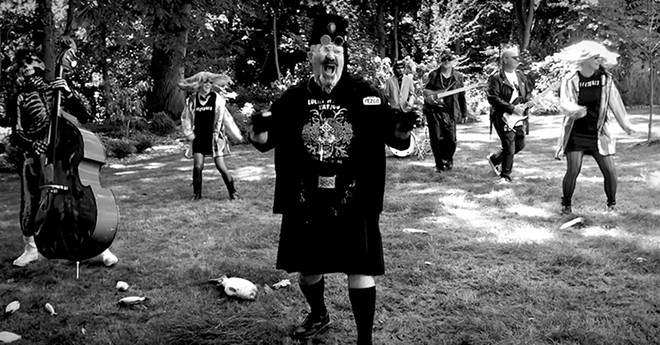 I recently attended the Concert of Colors in the lawn of the Detroit Institute of Arts, specifically for the Don Was tribute to Iggy Pop. I wouldn’t have even known about it if my buddy Joe hadn’t invited me, but it would turn out to be one of the musical highlights of my summer. It was remarkable to witness a group of legendary Detroit musicians performing covers with such zeal, all in an effort to pay homage to one of their hometown heroes (Pop was born in Muskegon and grew up in Ypsilanti, but still). It was also a personal reminder for me about one of the components of Detroit music that sometimes goes unnoticed, often eclipsed by the birth of techno or the reign of Motown.

The musical history of Detroit is so vast and complex, you would be forgiven for not knowing every part of it. Often our familiarity stems from personal experiences, whether it’s the music that our parents listened to growing up or the songs that have soundtracked our lives, spilling over us like a flood of memories. For Smitty E. Smitty, founder and co-organizer of the Detroit All-Star Garage Rock Punk Revue, he can remember the roots of what would eventually become his lifelong passion.

“Being a gentleman of a certain age, the first time I got inundated and mesmerized by rock ’n’ roll was the 7-year-old version of me watching the Beatles on Ed Sullivan,” he says. “To say it blew me away is the understatement of the universe, literally on that day my whole world changed.”

And so began Smitty’s musical journey, which would see him playing with Detroit-based outfit Figures on a Beach in the ’80s and currently in projects such as Little Billy Lost and Smitty E. Smitty and the Feztones. As a lifelong fan of the music, it’s no surprise that Smitty eventually found himself in an organizing role.

With an impressive list of friends and collaborators in the scene (Don Was produced a Figures on the Beach single, for example), it was only a matter of time before Smitty would be inspired to get them all together. Enter The All-Star Garage-Rock Punk Revue, which started in 2016 to celebrate the rich history of Detroit’s independent punk rock from the late-1970s and ’80s. After an unexpectedly successful first year they had no choice but to do it again, and in 2017 the show began bringing in new bands currently making their mark on Detroit’s punk scene, merging the past and the present in a way that was both nostalgic and forward-thinking.

“The first time we did this at PJ’s Lager House, it was almost like a high-school reunion with all my punk rock friends,” Smitty says. “After that, I realized that if I was going to do it again, we had to inject some newer talent in there.” Since then, the representation of Detroit’s new guard of punk has only increased, expanding the appeal of the event and building upon the legacy that inspired it in the first place.

COVID-19 put a halt on the 2020 show, but after a long hiatus the show is back in action for a two-day festival on Aug. 19 and 20 at Cadieux Cafe. The venue change both helped the group accommodate for an expanded, two-day lineup, and also made sense given the nature of the pandemic.

“I wanted to change it up, and Cadieux Cafe has an outdoor stage, so I thought this is great,” says Smitty. “For those of us that are feeling funny about [COVID] variants and things like that, hopefully people will feel more comfortable with an outdoor event.”

He adds, “I don’t have a crystal ball, but I think The Detroit All-Star Garage Rock Punk Revue IV will be the biggest and best one yet.”

While there will certainly be some nostalgia for the days at PJ’s, especially given the recent sale of the building, the group is excited for what’s to come.

The festival will be hosted by iconic radio DJ Michael Halloran, former host of WDET’s Radios in Motion, and will feature 21 bands across two days. The first day’s lineup will feature a stacked bill piled into a single night, including Detroit’s self-proclaimed (and often validated) first punk band Cinecyde, a new project from the Mary Cobra of the Detroit Cobras called GiGi, and local standouts Sugar Tradition, who recently opened for Jack White on his tour stops at the Detroit Masonic Temple. Day two will have programming starting in the afternoon and going all night, featuring music from Audra Kubat, the Amino Acids, and more. Smitty himself will make a few appearances Saturday, playing first with Smitty E. Smitty and the Feztones and then later with Little Billy Lost with special guest and co-curator of the festival, Stirling.

In speaking about his journey and the event itself, Smitty can’t help but feel grateful.

“I thank my lucky stars that I’ve had the opportunity to tour with a couple bands, and I’ve seen this kind of music all over the country and even in parts of Europe,” he says. “The more I got out there, the more I realized just how beautiful and unique the Detroit music scene is. This is a celebration of the No. 1 rock ’n’ roll city on planet earth, and everybody else is fighting for second place.”