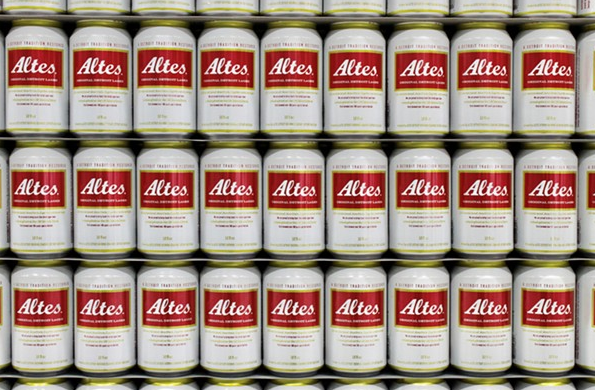 Altes, a historic Detroit beer, is back — and nobody could be happier about it than Santa.

The folks behind the relaunch of the lager, which originated in Detroit sometime around 1910, have teamed up with Southfield-based ad agency Doner to bring six new holiday-themed commercials to Facebook and YouTube, all starting on Thanksgiving Day. The commercials are filmed at the Two Way Inn, Detroit's oldest bar, and feature Santa imbibing in Altes after delivering presents, Comet the reindeer pooping, and a flirty call with Santa's wife, according to Crain's.

What's more, Altes will be paying Doner for the ads in beer, as Doner is treating Altes almost like a pro-bono account, according to Crain's.

The ad agency and the beer company have a storied past. Doner created a jingle for the lager that was "practically … adopted as a Detroit's official city song," according to The Detroit Free Press in 1973. According to the Freep, lyrics in the city-centric song include, "This is my town, Detroit is where it's at for me."

Altes used to be a staple of Detroit. The company was initially called Tivoli Brewing Co., but changed its name to Altes in 1949 after its sought-after lager. It even officially sponsored the Detroit Tigers and Lions back in the 1960s. But then Altes was bought by the Baltimore-based National Brewing Co. in 1955. All Detroit production had stopped by 1973, and by the 1990s, it was nowhere to be found.

That all changed when three metro Detroit natives set their minds on reviving it. Detroit National Brewing Co. co-owners Pat Kruse, Eric Stief, and Carl Erickson obtained the Altes trademark and started a business together. The beer then officially came back to life on April 20, when the company reintroduced the beer with an "Easter egg-style beer hunt" at Detroit's Old Miami. The beer hunt turned out to be an effort by Doner, which also created online ads featuring Jimmy Doom, a local actor (and Metro Times contributor) dressed as a bunny. (Doom plays the bartender in the new Santa ads.)

Altes, a beloved made-in-Detroit dad beer, is back in town

Now that Altes Original Detroit Lager has been fully resurrected from the dead, new commercial batches are being made regularly at Corktown's Brew Detroit.


So many restaurants, so little time. Find out the latest Detroit dining news with our weekly food newsletter delivered every Friday morning.
© 2022 Detroit Metro Times