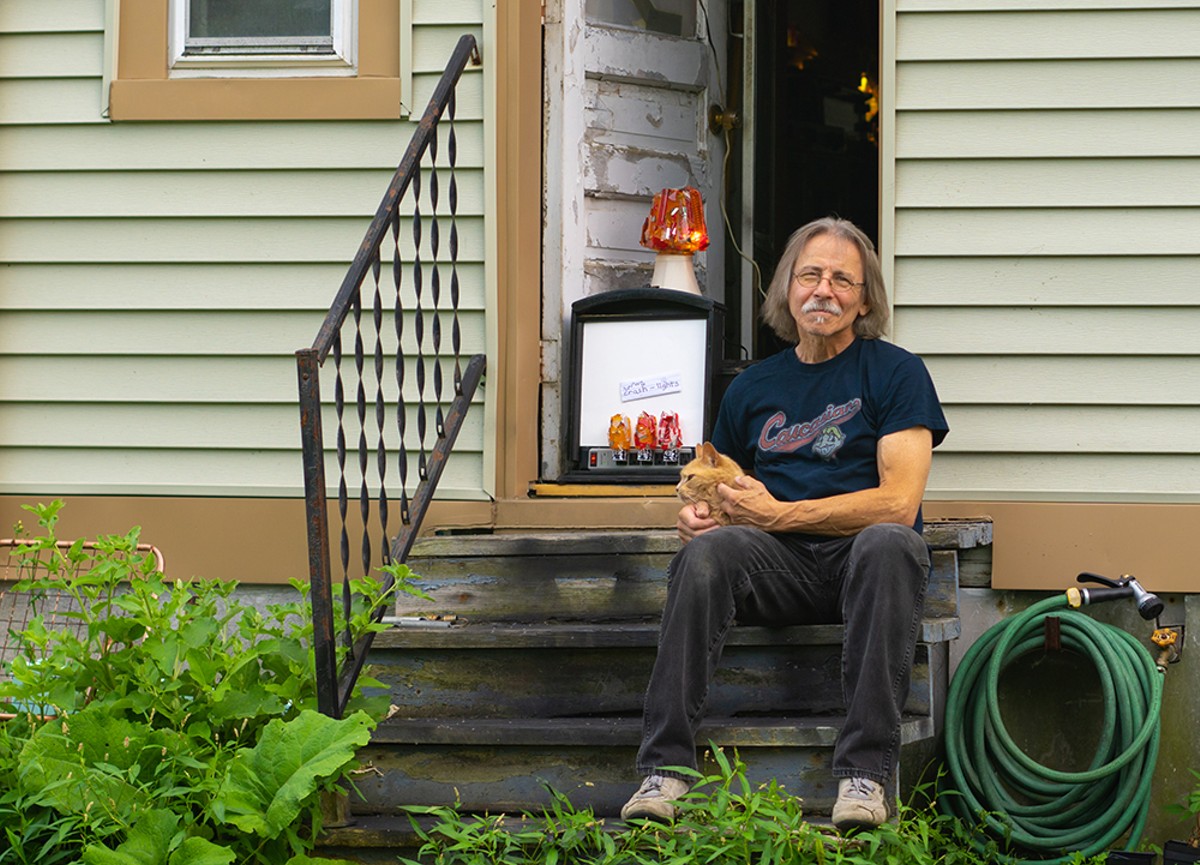 In 2013, longtime residents of Brooklyn, New York, were shocked to learn that Stephen Trimboli was leaving the performance space and resale shop that he had operated in Bushwick since 2004 and was departing for Detroit.

Longtime Detroiters may not find Trimboli's decision so outrageous. The 65-year-old Italian-Irish cross, born and bred in Sheepshead Bay, Brooklyn, would seem to be exactly the sort of coastal misfit destined for the Motor City. Yes, most of the artistic types drawn by Detroit's low cost of living and relative freedom from busybodies are in their 20s and 30s, but Trimboli is making good on what seems like a working retirement here, pioneering a gritty art form all his own. (More on that later.)

Trimboli had always harbored dreams of becoming an artist, of being a talented musician or a prolific writer. At least he knew well enough that he didn't want to sit behind a desk for the rest of his life.

"I became a waiter and a bartender," he says. "I remember telling everyone, 'I got into the bar business as a means to an end so I could have my time to write,' which was a very convenient lie, because all I liked to do was get high, get drunk, and get laid and wake up the next morning and do it again."

But eventually, after spending years in the service industry, he found his creative niche: "I became a guy who gave a place for musicians to be."

In the 1980s and 1990s, that space was Manhattan's Scrap Bar. By 2004, it was his Goodbye Blue Monday in Brooklyn. Originally a sort of resale shop, hangout, and coffeehouse, it had an open-booking policy that attracted bands before they got big. (Vampire Weekend played one of its first shows at the venue.)

Trimboli might never have come to Detroit unless one of the city's artists had worked for him. Bridget Michael, the Hamtramck-based artist who became a Kresge fellow in 2015, worked for Trimboli around 2011, until a bicycle accident forced her to return to Detroit. In July 2013, as Trimboli faced mounting rents, red tape, and other hassles, Detroit began to look better and better.

When Michael was startled by a call from Trimboli announcing he was moving to Detroit sight unseen, Trimboli said, "Yeah, what do I have to see? Is it any worse than what I grew up in?"

"That's pretty much what I told her," Trimboli says. "I grew up in New York in the '70s. It was fucked. So I'm coming to another city that's fucked, who cares?"

For a Brooklynite who spent his 20s in New York during its nadir, coming to Detroit was like a trip back to fondly recalled times. "Literally, as I was driving into Detroit," he says, "I'm looking at all the wood frame houses that are either holes or burnt, and I immediately felt a sense of belonging because of that. I'm looking at my youth here. I'm 60 years old, I'm looking at my fucking youth. I loved my life when I was in my 20s."

Trimboli could hardly have settled in with better company in Detroit. He spent his first few months in town living near Popps Packing in Hamtramck, although these days he lives in the relatively intact precincts of Detroit's Farnsworth Street. Two of the first people he met in town were Rebecca Mazzei and Joel Peterson of Trinosophes, the performance and art space near Eastern Market. He works the door for the venue some nights, and is often recognized by the traveling musicians who've played his old Brooklyn spot in years past. He says more than half of the people playing there know him.

Trimboli knows that sweet spot between disinvestment-driven dysfunction and DIY determination where he spent years thriving, but in the end, he has always had to flee.

"What happened downtown is exactly what happened in the East Village, the Lower East Side, in Williambsburg, and in Bushwick," he says. "You saw it happen right before your eyes. It's like a feeding frenzy. New York is eventually just going to be the vapid city. That's what I call New York: the vapid city."

"When I came here," he says, "I saw the writing on the walls already. But what I like about Detroit is it was a city built for about 3 million people, and there's about half a million people here. And that means that there's a lot of available parking. And when you get forced out of where you're living, there's another 100-odd square miles of this city where I might still be able to find a rent that I can pay."

In fact, it's among the low-rent and ramshackle that Trimboli found his latest gig, collecting pieces of plastic brake lights down at the corner. He buys cheap nightlights and then decorates them with red, orange, and yellow plastic from broken taillights. In order to collect material for his business, Crash Lights, he now visits junkyards and collects bags of the broken bits. In fact, at Detroit's Parts Galore, he routinely collects as much of the stuff as he can take off the ground and dump into a bucket. On one recent visit, he left them with two of his lights as a gift. When he returned, the staff all came out to gladhand him, offer him a T-shirt, and snap a photo of him for social networking. "I'm sort of like Andy Warhol to them," Trimboli says with a laugh.

Finally, the promoter, hustler, and bartender has become a bona fide artist. And he only had to move to Detroit for it to happen.

"I became an artist, yeah," Trimboli says with a wry smile. "And the truth is that this is the first time."

Born in 1969 at Mount Carmel hospital in Detroit, Jackman grew up just 100 yards from the Detroit city line in east Dearborn. Jackman has attended New York University, the School of Visual Arts, Northwestern University and Wayne State University, though he never got a degree. He has worked as a bar back, busboy,...
More
Scroll to read more The People Issue articles
Join the Metro Times Press Club