Every experience is ‘a portal that you can walk through into a new reality,’ the Flint-based artist says 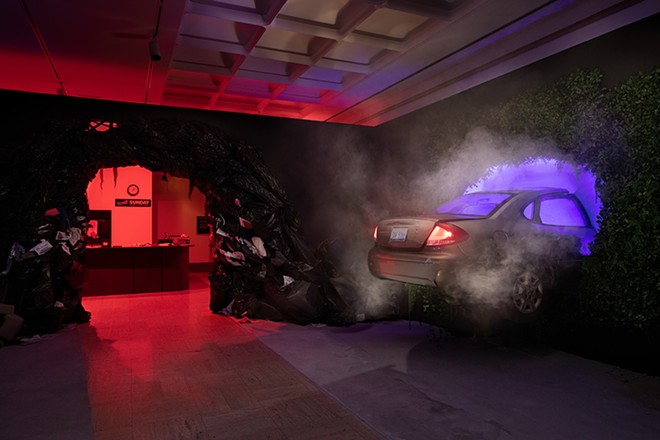 Is there anything Tunde Olaniran can’t do? We already know the Flint native is a master of crafting pop songs with danceable beats and catchy vocals. With their first museum exhibit, Made a Universe, we learn that Olaniran can write, direct, and act in a film too.

Made a Universe leads Cranbrook Art Museum visitors down a slow descent into horror. Stepping into Olanrian’s foreboding world begins on a tranquil beach with a doorway to calm waters, but things quickly fade to darkness as you walk through a distorted bedroom and garden with broken-down cars lodged into the walls. At last, a chasm of water shutoff notices leads to an eerie bill payment center glowing red as though welcoming the arrival of Satan.

The physical installation is a recreation of the set of Olaniran’s film by the same name, which is screened in the exhibit’s final room (after you’ve passed the Satanic payment office).

Onscreen we meet Olaniran, who has the power to open portals to other dimensions, as they try to save the other characters from society’s oppressive forces. One of the characters, Leon, has resorted to stealing cars to make ends meet, while elsewhere Flint residents are stuck in an endless hell waiting to pay their utility bills.

“If you’re here, you’re out of options,” a worker at the payment center says in the film. “If you leave, we will find you. You must resolve your matters today or we will come to collect what’s ours.”

“I wanted to recreate the feeling of growing up living in Flint and being poor,” Olaniran tells Metro Times. “You deal with emergencies every other day because you’re trying to pay one thing, and then you can’t fully pay something else. The pay center just felt like this central location that held a lot of emotional energy because you’re forced to be in this place. I was thinking about how helpless and trapped you can feel in those situations.”

The music video crossover style makes sense, being that Olaniran is a pop singer, producer, designer, and choreographer. To their credit, the songs are infectious — one of the tracks, “Forgiveness” has been stuck in our heads since seeing the film.

“That’s a song that most people didn’t really listen to on the album,” Olaniran says. “I wanted that song to have its own life because there’s a lot more to unpack than maybe was given the chance to from most listeners when it came out.”

They add, “I wanted to explore some of this music in an untraditional way, not just trying to do music videos, but having a narrative that explores it.”

By choosing to have museum goers walk through the exhibit before seeing the film, Olaniran offers the chance for our imagination to run wild in anticipation.

What’s with the hairy black hand that looks like it crawled out of a Tales From the Crypt episode clawing through a bed? How did these cars crash into the wall? Who is Raivan, a superhero who appears on a lone T-shirt that’s been abandoned on the deserted beach?

Most of these questions are eventually answered in the film, but some are more abstract.

It’s a brilliant foreshadowing technique that fully immerses the viewer into the film and leads them back out into safety after the experience has commenced.

“I want you, walking in, to go from serenity to dread as much as we can evoke before the film starts,” Olaniran says. “Then once you leave the film you can go back, hopefully, with a sense of serenity again, but also all of the things you’re passing through have a different meaning now that you’ve seen the film. This is the same feeling the (main) character has by the end. There’s some glimpse of hope as you’re walking back out.”

While Olanrian does a lot of the heavy lifting, several other artists sprinkled their imagination on Made a Universe to make the multi-dimensional effort.

Olaniran even worked with Grammy award-winning cellist Yo-Yo Ma on several songs for the film, including one called “Doorway.” This track, along with one of the final scenes where Olaniran transports the other characters onto the beach through a doorway, was inspired by a conversation they had with Yo-Yo Ma in the studio.

“He brought up this metaphor of being who he is, this iconic person, all doors open for him all the time,” Olaniran recalls. “And he’s like, ‘I want to make sure that the doors don’t close behind me and that everyone can come through with me.’ He’s gone everywhere and has met so many people in different communities that he just sees a singular humanity and doesn’t want to leave any person that he meets behind.”

If there’s one thing Olaniran teaches us in their debut film and museum exhibition, it’s that everything is a portal.

“Every experience, every wound, every interaction is potentially a portal that you can walk through into a new reality and you can create something new,” they say. “Whether you go through it or not is also a choice and whether you take other people with you. Do you think about how many doors you walk through every day? What if each of those was an opportunity or a challenge?”

After living in Japan and traveling across Asia, Randiah Camille Green realized Detroit will always be home. And when she says Detroit, she's talking about the hood, not the suburbs. She has bylines in Planet Detroit News , Bridge Detroit , BLAC magazine, and Model D . Her favorite pastimes are meditating...
More
Scroll to read more Fall Arts Guide articles
Join the Metro Times Press Club