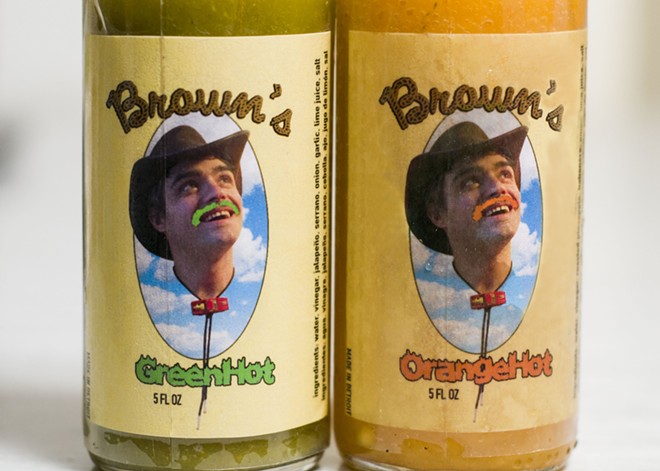 When it comes to local foodstuffs, Michigan's best-known exports are its cherries, coney dogs, pizza, and even pickles, but it's quietly become a place for some of the nation's finest hot sauce. I spent a week sampling some of the state's offerings, and now I got Michigan hot sauces in my bag.

Among Michigan's best hot sauces are bottles that are hard to get —those made by Craig Brown, the singer and guitarist for Third Man Records' Craig Brown Band. It's not available in stores, and one can only find bottles at special events or when his band plays live. It's always difficult to say what qualifies as "hot" and what doesn't, as it's a subjective measure that's different for everyone, but it's safe to say that Brown's sauce is hot, but the blend is more about flavor and won't singe your tongue. He makes two types — green hot, made with jalapeño, serranos, garlic, water, white vinegar, salt, lime juice, and white onion; and the pineapple-habanero with vinegar, lime, salt, water, and garlic.

Brown says he developed the Green Hot recipe about five years ago through trial and error. He simply rough chops the vegetables, sautees the pineapple, boils everything down until the water evaporates, then blends it with vinegar. He says his favorite hot sauces are those served by Detroit's taco trucks, and it shows in the sauces, which are good for a range of applications, but they especially work well with breakfast stuff like eggs and potatoes. The habanero-pineapple is also excellent on pizza.

The first bottle of the Brinery's Aura Solonales hot sauce I ever purchased was gone within 24 hours. Some of it made it on food, but mostly it was just chugged. The bright-red fermented Louisiana-style sauce it holds is hot and slightly sour with a mix of vinegar, jalapeño, cayenne, cherry bomb, serrano, and fresno, and though it's physically thin, its flavor is, as owner David Klingenberger put it, "mellow and deep."

The Brinery launched in 2010, rolling out its first hot-sauce lines a few years later, and Klingenberger thought it would be a cornerstone of the business. That didn't happen, but it should have, because there are few hot sauces under the sun that are superior to the Aura Solanales, which developed with the help of Takoi chef and co-owner Brad Greenhill.

In creating the sauces, Klingenberger uses the same lacto-fermentation process as with the Brinery's kraut, but instead extracts the pepper juice and blends it with vinegar. He says he prefers fermenting hot sauce because "you unlock a lot of flavor, especially with peppers" in a way that he says doesn't happen otherwise. Klingenberger describes the sauces as "flavor enhancers, not flavor maskers," and says the Aura Solanales is ideal for Southern food, Latin cuisine, breakfast dishes, and more. You can find the sauces at Whole Foods and mom-and-pop grocers throughout southeast Michigan.

Ferndale-based 2 Dogs launched in 2016 and is growing with a super thin, brownish red sauce that holds a mix of black garlic and habanero. It bites the tongue, but isn't unbearable like some habanero sauces. Good thinking on the black garlic, which is fermented garlic that turns black in the process but doesn't taste particularly "garlicky," and instead is slightly sweet and earthy. That works well with the habanero, and there's a lot of depth for such a thin sauce. It's rounded out with garlic, red bell pepper, green onions, salt, and sugar.

Owner Brian Jones started making hot sauces because he had a stroke, and peppers are known to increase blood flow. He also sells a Michigan cherry habanero sauce and, in May, rolled out a mild tomatillo-based sauce. Among the many uses Jones suggests for his sauces, the most interesting is cutting it with butter and putting it on chicken wings, as one would to prepare a Buffalo sauce with Frank's.

Clancy's has been around for 40 years in Ann Arbor and is one of the first sauces I got hooked on as a kid. The mildest of the three versions is fairly thick, earthy, acidic, and slightly sweet, owing to the inclusion of orange juice, apple cider vinegar, raw wildflower honey, and mineral bouillon. That's blended with olive oil, tamari, ginger juice, and paprika, and Clancy's uses cayenne pepper for its bite. It's perhaps the most complex sauce of the bunch, and can be found in markets throughout Michigan.

Hell Fire's Cherry Bomb is a bright red, thick, electric red sauce, dense with seeds from the cherry bomb pepper. As with all of Hell Fire's sauces, the fire-roasted peppers do most of the lifting. Owner Don Button coats fresh peppers in olive oil, fire roasts them in a drum outdoors, de-stems, then purees them. He next adds a little apple cider vinegar, sea salt, pepper to accent, but, he says, "our whole goal is to make it as pure as possible."

Button started making sauces as gifts ahead of Christmas 2016. After a long day of sauce preparation, he had a vivid dream that he launched a hot-sauce company called Hell Fire Detroit, and when he woke up the next day he started working on a logo and bought the URL. By the end of the next year, Button had made his dream come true. (You can spot Hell Fire Detroit on the current season of Hot Ones, the Sean Evans-hosted YouTube-based interview show "with hot questions, and even hotter wings.")

He says the sauces are ideal on a range of food because they are essentially pureed, fire-roasted peppers instead of a traditional hot sauce. One of his more interesting suggestions for the Cherry Bomb was pasta, and we can confirm it adds a nice dimension to a plate of spaghetti. You can buy Hell Fire at stores like Western Market, Meijer, Honey Bee Market, DeVries, and elsewhere.

Scotty O'Hotty's Beer Bacon Chipotle sauce was the biggest surprise of the bunch. I like complex sauces, but beer and bacon with flames on the bottle — I wasn't sure I needed that. I was wrong. The dark red sauce is smoky and filled with peppers. It's slightly sweet, deep and well-balanced and even includes red Michigan apples — altogether excellent. Scotty O'Hotty's seems to be turning into a regional brand, and is a "hot sauce dude's" hot sauce company. Aside from the Beer Bacon Chipotle, which is relatively mild, O'Hotty plays a lot with the world's hottest peppers, offering varieties with ghost, scorpion, and Carolina Reaper, the latter of which is mixed with moonshine. Dang. As far as procuring a bottle, there are plenty of options to browse on the Scotty's site.

Fly Trap's Swat sauces are — like the Brinery's Aura Solanales — one that I regularly drink straight from the bottle. The Ferndale diner originally served their bright sauces as a side when it opened in 2005, but quickly began bottling it to meet demand. The "Original" is a red sauce that's driven by habanero, carrots, and apple cider vinegar, and is a slightly smoky with some "jerky," Jamaican elements. The "La Picadura" is a green sweet-and-spicy sauce built around roasted jalapeno, cilantro, garlic, and apple cider vinegar, while the Lil' Prik is a garlic-heavy sriracha-style sauce.

The Original works well with egg dishes, while La Picadura fits with burgers, or can be mixed with mayo. The Lil' Proik should be on Asian dishes or with the Fly Trap's salmon burger. So far, Holiday, Western, Westborn, and Yellow Door all stock the sauces, but Fly Trap is planning to open a hot-sauce factory and boost production. The restaurant's website has more information on the sauces.

Scroll to read more Made in Michigan articles