The long-abandoned psychiatric hospital has a sordid history, but those behind the multimillion-dollar development say they, too, just want to help people 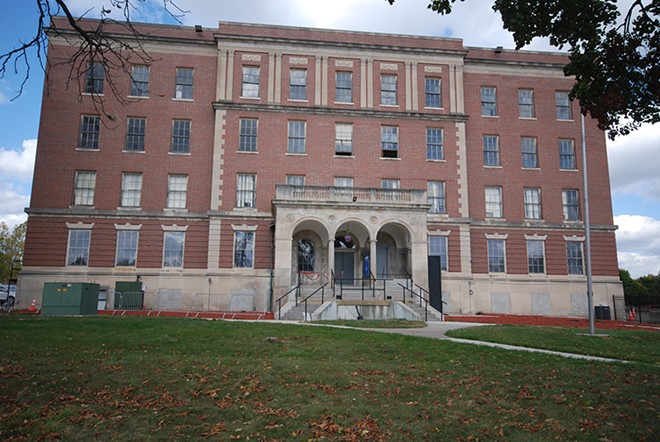 Courtesy photo
The Kay Beard Building is one of the remaining structures of the once-sprawling Eloise Psychiatric Hospital.

For the first time since the 1980s, the Kay Beard Building at Westland’s sprawling former Eloise Psychiatric Hospital campus is once again accepting patients. Well, sort of.

A long-abandoned icon of local lore with a history that dates back to 1839, Eloise was for decades a favorite of urban spelunkers, history buffs, and even paranormal investigators. But last year, a development group breathed new life into it by transforming its bottom floors into a haunted Halloween attraction. “Eloise Asylum” riffs on the facility’s spooky history as the largest psychiatric facility in the U.S., a small city within a city that once treated as many as 10,000 patients.

The attraction is the brainchild of David Carry, who comes from a career of designing world-class haunted attractions and moved to Michigan from New Orleans for the project.

“What we did is we tried to tell a story,” he says, guiding us through the set during a recent weekday. “It’s not your typical haunted house.”

Once inside, guests are corralled into the lobby, where they “check in” to the facility and proceed into various themed rooms that contain a phantasmagoria of terrifying sights, including a “brainwashing” room showing disturbing images on TV screens and laboratories where twisted experimentations are conducted. It’s a play on Eloise’s real-life history, which involved then-new psychiatric treatments like electroshock therapy, lobotomies, and sensory deprivation.

The sets have been seamlessly blended into the existing Eloise structure. “Some of this is real, and some of it’s fake,” Carry says, knocking on various set pieces to show they’re actually made of wood and painted to match the aging building surrounding it — the handiwork of artisans with experience in working in Michigan’s short-lived Hollywood film industry.

Standing in a faux morgue surrounded by dummy cadavers, Carry says he’s fooled plenty of attendees. “We got a funny Yelp! review or something, I can’t remember which platform it was, but somebody said they physically felt uncomfortable being in the building,” he says. “She said that she felt sick after seeing this set, because she said it’s really offensive to have people go through the actual morgue. I was just like, thank you so much. That’s the greatest thing, compliments like that. They thought it was real.”

Courtesy photo
Eloise Asylum developer David Carry says the haunted attraction's “morgue” is so realistic that it has fooled attendees into believing it was real.

The development has been described as costing somewhere between “north of $1 million” and “multimillion-dollar.” And it’s still a work in progress. This year, a second attraction has been added; admission grants access to both, which each take about 30 minutes to roam. The developers also intend to add several separate “escape room”-style attractions throughout the year where teams of players must solve puzzles in order to “escape” the asylum.

Carry says this year, they added things to the design that they just didn’t have time to get to last year, and also tweaked the existing layout in response to feedback. For example, he says some said they felt that seeing other guests walking through the same parts of the attraction took them out of the illusion of the experience, so this year they closed off some lines of sight. The public also wanted more pop-up scares, he says.

Eloise Asylum employs more than 100 actors dressed as various characters, roaming the grounds and spooking attendees. Carry says they’re a mix of locals and traveling actors from the haunted attraction circuit. “We’ve been really lucky and have a lot of people that want to be involved in this,” he says. “They’re Halloween-lovers, they’re haunted house enthusiasts, for sure.”

The sets contain a mix of actors and animatronic puppets, which are sometimes combined to create what Carry calls “chameleon scares,” where an actor will be hidden among the animatronics. Carry says they’ll rearrange the sets each night, swapping animatronics out with actors to keep fans on their toes.

“You’re never going to get the same show,” he says. “You might get something a little bit different from night to night. It’s great for people that want to come multiple times a year.”

Carry has designed other high-profile haunted attractions and other immersive entertainment experiences across the country, including the former satanic-themed House of Shock founded by Pantera frontman Phil Anselmo in New Orleans, considered one of the best in the U.S. He was also involved with Seismique, a high-tech psychedelic art exhibition in Houston that he says changed the way he thinks about the possibilities of haunted attractions.

“I learned a lot from that,” he says. “I thought there were a lot of really interesting things to incorporate into the haunted house realm, just taking different types of artists and having them do facade projections or video mapping, and incorporating that into a horror thing.”

He believes Eloise Asylum is one of the most technologically advanced Halloween haunted attractions in the world right now. Digital projections make it appear as though ghostly apparitions move through walls, and attendees can peer into the windows of “padded rooms,” which are actually TV monitors playing footage of actors. There’s also a creepy “whisper” hallway with sounds that come from a series of speakers, making it seem as though voices are following you around.

“Sound is something that I felt was always a void in haunted houses,” he says. “So we really try to pump that sound in there so that you can actually feel it.”

As you wander deeper and deeper into Eloise Asylum, Carry and company keep upping the ante. We don’t want to give too much away, but let’s just say we were thoroughly disoriented — and disturbed — by the time we emerged back into the sunny autumn day outside. 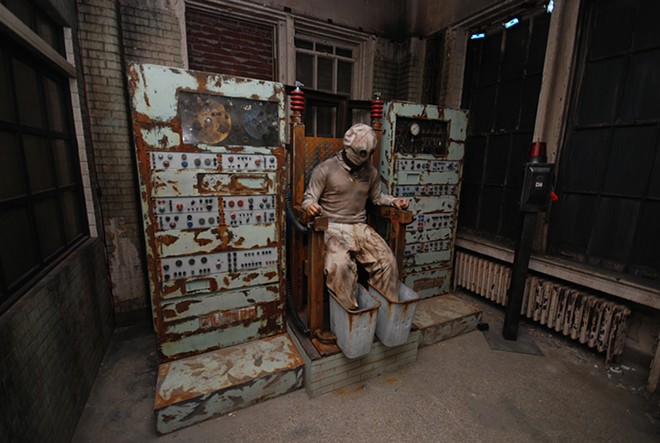 Certainly, a large part of the scare factor of the Eloise Asylum attraction comes from its spooky real-life history, and the developers are aware of criticisms that they’e making light of the actual pain and suffering that happened within its walls. The Eloise Asylum website tells its guests they will “Scream for a great cause!”, noting that a portion of ticket sales support a local homeless shelter that was opened in another one of the former hospital buildings on the campus.

Eloise Asylum has expanded outside the Kay Beard Building as well, filling a former empty field with a carnival-style environment to keep people waiting in line entertained with food vendors and live entertainment. There’s even a stage with an old-school “freak show.”

That’s performed by Reverend B. Dangerous, a traveling performer with an Uncle Fester vibe. At one point, he hands us a screwdriver, and then jabs it into a nearby wood panel to prove it’s real. Then he shoves it up his right nostril — all the way. (Kids, don’t try this at home!)

Dangerous has taken his freak show on the road, touring with acts like Ozzy Osbourne, Black Sabbath, Slipknot, Pantera — “every big heavy metal band that you can think of,” he says.

“I love it, I think it’s a great word to be called a ‘freak,’ because that means you’re an individual,” he says. “And that’s what this place is about, these independent individuals.”

He says Eloise Asylum is among the most impressive productions he’s ever seen.

“I’ve worked for some of the top haunted houses in the world,” he says. “And this one is there. I mean, it’s past it.”

While we’re talking, Dangerous invites us into the upper unused floors of the ward, where the padded rooms used to be. We walk the sunlit halls, passing graffiti left behind by urban explorers, and Dangerous waxes philosophical about the genre of horror entertainment.

Dangerous acknowledges the criticisms the attraction has faced. He says that while Eloise Asylum is designed to terrify people, he also hopes it can help the area, both economically and beyond.

“I’ve read different posts that are people talking about the suffering that happened here, and there was suffering,” he says. “I can’t take that away. But it was also a hospital to help some people. There was also good.” 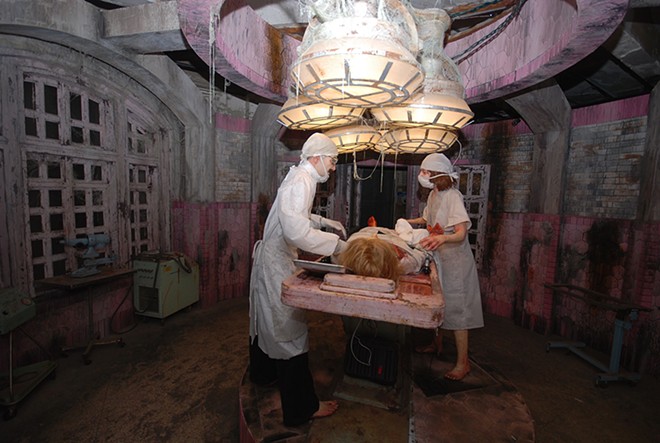 Courtesy photo
The scenes at Eloise Asylum haunted attraction include a mix of animatronics and actors, in sets that have blended into the existing actual building structure.

He adds, “You have to remember there was the woman who lost her husband in the war, and she just needed somewhere to go for a minute. This was a hospital, and there were people with good hearts that did good work here. … And that’s what I hope that this can turn back into.”

Dangerous says he likes to scare people because he wants to jolt them into reality. These days, he says he sees too many people listlessly scrolling on social media apps like TikTok on their phones. He believes this social media addiction “disconnects” us from ourselves.

“That’s what these phones do sometimes, it makes you forget that you’re alive,” he says. “And that’s what a good scare — a great scare — does, is remind you.” He says he can see a result almost immediately. Once the adrenaline subsides, “They’re smiling. You can see that little candle light up.”

He says, “That’s the great thing about haunted attractions, horror shows like this, is that people are able to leave with a good laugh, a good shiver down their spine. … This helps reconnect those wires a little bit.”

He adds, “And if you look away? I’m coming after you! I’ll force you to watch!”

Leyland "Lee" DeVito grew up in the suburbs of Detroit, where he read Metro Times religiously due to teenaged-induced boredom. He became a contributing writer for Metro Times in 2009, and Editor in Chief in 2016. In addition to writing, he also supplies occasional illustrations. His writing has been published...
Read More about Lee DeVito
Scroll to read more The Halloween Issue articles