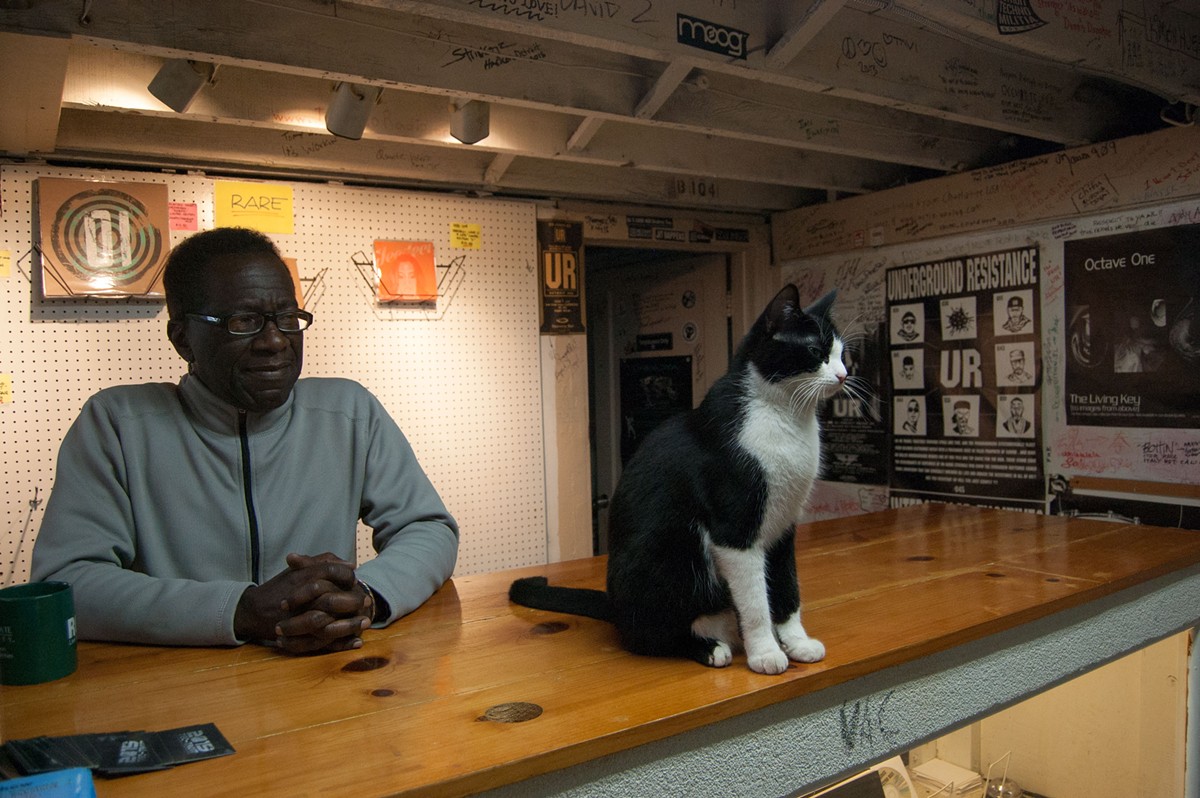 Just down the street from Detroit's famous Motown Museum is another building, also dedicated to one of the Motor City's musical legacies, and arguably just as important. You'd never guess from its unassuming exterior — unlike Hitsville USA, it doesn't even have a sign, making it all but invisible to only the most diehard of fans.

The label and collective, founded by producers Jeff Mills and "Mad" Mike Banks in the late '80s, came to rise during Detroit techno's second generation in the '90s. The group developed a reputation for a socially conscious message and a militant, mysterious aesthetic, its members often performing disguised by bandanas. So it's only natural that UR's headquarters is also cloaked in anonymity too.

"That's the underground way. That's what underground is," says John Collins, a DJ and producer and our guide for the day. "A lot of fans do research and find out about it. People come to the door, 'We hear there's a techno museum here in this building.' I'm like, 'Yeah, you want to come in?'"

UR acquired the building, a former UAW Union Hall, in 2002, filled with trash and debris. Today, it's the home of UR and Submerge, the label's management and distribution company, as well as "Exhibit 3000," a museum dedicated to the birth and rise of Detroit techno. The exhibit stems from a project with the Detroit Historical Museum more than a decade ago, originally intended to travel the world — when that didn't happen, it settled here.

Collins guides us to the exhibit's first showcase, seemingly containing a recipe of the necessary ingredients to create the environment that would one day birth Detroit techno. There are photos of Motown founder Berry Gordy, and Coleman Young, Detroit's first black mayor. There's the jacket to The Mental Machine, a book by popular DJ the Electrifying Mojo, an early champion of Detroit techno (who once invited Young to join him on air). The case also contains LPs by Kraftwerk and P-Funk (a nod no doubt to musician Derrick May's famous quote describing Detroit techno as if "George Clinton and Kraftwerk are stuck in an elevator with only a sequencer to keep them company.") The bottom row contains science-fiction ephemera — such as Star Trek — which illustrated the idea of "species coming together and cohabitating peacefully on the starship Enterprise," as Collins explains.

That brings us to the second showcase, which features photos of the first generation of Detroit techno artists: Juan Atkins, the aforementioned May, Kevin Saunderson, and Eddie Fowlkes, along with early techno releases like "Alleys of Your Mind" and Clear by Atkins' outfit, Cybotron. "A lot of people come here and they have no idea who the founders were," Collins says. "When I tell them they were African-American, they're like, 'What?' They just could not come to terms with a black person creating this type of music."

When asked to differentiate Detroit techno from other forms of electronic music, Collins drums out a quick beat with his feet and hands: "bum-da-bum-da-bum-bum." "There's computer-generated sounds, but there was a soulful element in it as well, which you would only be able to do if you were from Detroit," he says. "When the music migrated and went overseas, they couldn't do it the same way as these guys."

But it's the way that soulfulness interacts with the machine-made music that creates techno's intriguing tension. "House (music) was more structured," Collins says. "With techno, you had more freedom to do things that don't have to make sense. A musician probably could not sit down and play (Atkins') 'No UFOs' — it's really weird. The timing isn't right, and things happen when they're not supposed to happen."

Collins says the music reflects what Detroiters were going through in the '80s, pointing out that many early artists would pose in front of run-down buildings for publicity photos. There's a darkness too, evident in early records by acts like Cybotron. "It reflected what was going on — it was scary, it was dark, it was deep," Collins says. "But the music was futuristic — it's giving you hope for the future, that things will get better."

Collins moves on to the second generation of Detroit techno, and indicates a photo of himself, almost unrecognizable in long dreadlocks (he says he cut them following a kidney transplant he had a year ago). Collins made a name for himself as a resident DJ at a now-defunct club called Cheeks, which is when he first met Mills, then known as "The Wizard." "Jeff is one of the most gifted DJs in the world," Collins says. "He's on a whole other higher plane. He's up here scientifically, musically, and everyone else is down here." Collins recalls when Mills came to audition for a gig at Cheeks: "He went into the booth, and our mouths just dropped to the floor — records flying, scratching — just amazing. Never had I seen anything like that before in my life. I hired him on the spot."

Another legendary DJ featured in the display is Ken Collier. "He was like Frankie Knuckles was to Chicago or Larry Levan was to New York," Collins says. "He DJed at a club called Heaven, which was a gay club — probably one of the best clubs ever in Detroit. A lot of people would go just to hear him play. His programming was off the hook. Anything he played, people just soaked it up."

Collins then takes us to a room containing all manner of keyboards, synths, and 808 and 909 drum machines. One machine, noticeably older, stands out among the rest. Collins says that it's the lathe that Ron Murphy used to master many Detroit techno recordings with his company Sound Enterprises. A nearby framed 2001 Metro Times article describes it as "a machine built in 1939 that looks like a giant Art Deco sewing machine."

Though he wasn't originally in the business of mastering records, Murphy wound up becoming the go-to guy for Detroit techno records, thanks to enthusiastic fans in Atkins and May. "When he was first approached by these guys, he was like, 'What is this stuff?'" Collins says. "This was from another planet." Soon everyone in Detroit was coming to him to master, and not long after that, people from around the world. Upon Murphy's death in 2008, he left the lathe to UR in his will.

Lastly, Collins takes us down to the basement, which houses a record store stocked with UR's releases and signature black T-shirts emblazoned with their logo, its walls and ceiling covered in countless signatures visitors and fans. (You'll also find DJ Alley Cat — quite possibly the friendliest cat in all of Detroit, named for her habit of pawing spinning turntables. "When we first found her, she stayed away from everybody," Collins says. "It took a while, but now she's like a dog.")

Above the stairs is a map of the world, with pins indicating UR's fans. Quite a few are scattered around Michigan. A great many more are evenly clustered throughout Europe. But the pins extend across the planet — there's even a few on New Zealand. Below the map, a sticker sums up the phenomenon: "Techno brings people together."

Leyland "Lee" DeVito grew up in the suburbs of Detroit, where he read Metro Times religiously due to teenaged-induced boredom. He became a contributing writer for Metro Times in 2009, and Editor in Chief in 2016. In addition to writing, he also supplies occasional illustrations. His writing has been published...
More
Scroll to read more Movement articles
Join the Metro Times Press Club