The Rolling Stones keep fucking going, will perform in Detroit this year 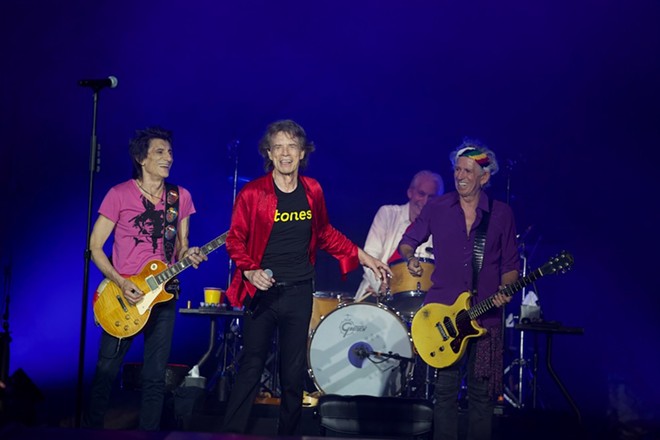 If you happen to notice the Rolling Stones trending on Twitter, do not panic.

The 308-year-old band — that's if you add up the ages of the unstoppable Mick Jagger, Keith Richards, Charlie Watts, and Ronnie Wood — announced the return of their No Filter tour, which was postponed last year, leaving Detroit fans craving satisfaction from the World's Greatest Rock 'n' Roll Band.

The tour, which launched in 2019, had planned to stop at Detroit's Ford Field last summer and will finally fulfill that promise from the band — which should probably be dead by now, but by the grace of god or the devil or Quaaludes are still standing — when they visit the home of the Detroit Lions on Nov. 15.

The 13-date itinerary picks up where the band left off in 2019 with a hit-packed, three-leg, three-year outing, which, before being postponed had raked in a massive $415.6 million, making it one of the highest-grossing tours of all time — rivaled only by the Stones' massive Bigger Bang outing that spanned 2005-2007. The Stones 2021 tour includes previously scheduled cities, some new stops, and, unfortunately, skips original dates in Vancouver, Louisville, Cleveland, and Buffalo due to scheduling issues.

I can't wait to finally get back on the road with the @RollingStones this Fall! See you very soon USA 🇺🇸
Tickets on sale now: https://t.co/TxxVKSU8zo pic.twitter.com/bxy2vkTR8h


Is this the last time we could see the Stones? Not to be morbid, but in recent years, countless legacy acts have announced their retirement with farewell tours, and in some cases, multiple farewell tours (cough, KISS, cough), but not the Stones. In fact, Richards says they don't plan on ever retiring, despite mounting health issues.

In 2019, Jagger, 76, underwent a heart valve replacement surgery (and, in true Jagger fashion, was up and noodling around on stage like a teenager just three months later). In 2018, Ron Wood, 72, announced that he was all clear following a lung cancer scare, meanwhile, Watts, 78, was diagnosed with throat cancer in 2004. As far as the indestructible Richards goes, he's flirted with sobriety in 2018, and has cut out smoking cigs and reduced his alcohol intake. “Drugs are not interesting these days. They are very institutionalized and bland,” Richards told Neil McCormick in 2018. “And anyway, I've done 'em all.”

We don't doubt that for a second, Keith.

Any previously purchased tickets for Detroit will be honored at the rescheduled performances. For additional ticketing information and refund details, visit rollingstones.com.