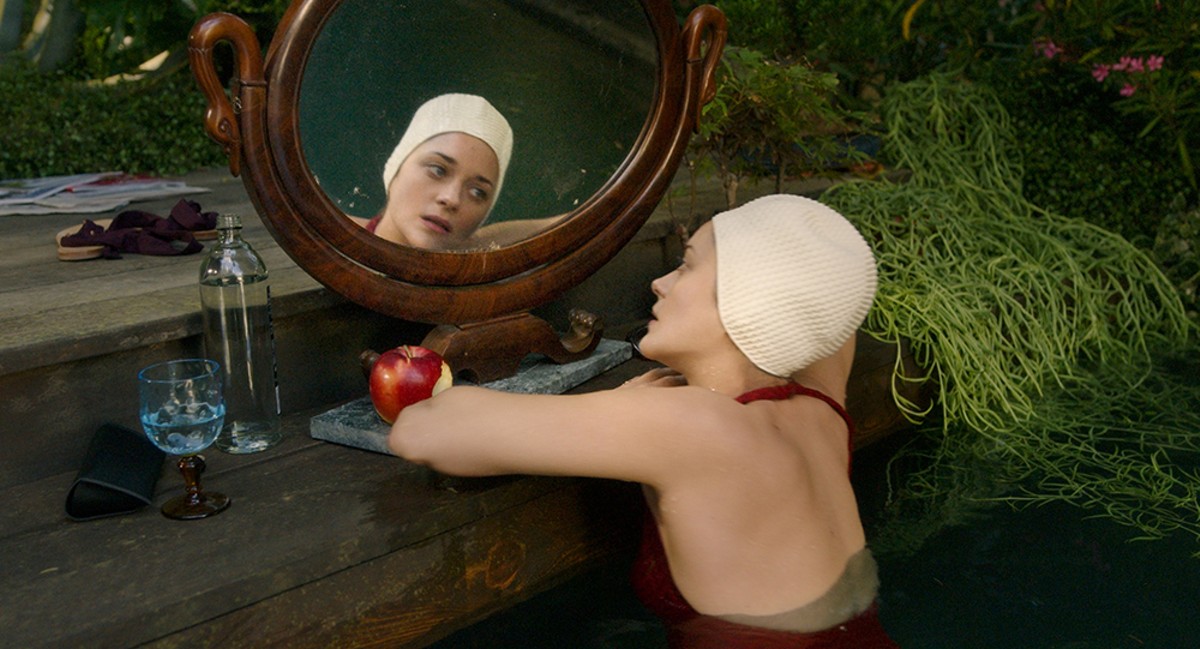 Like many filmmakers, Leos Carax has been finding new ways to iterate the same essential story onscreen for years. While his previous film, Holy Motors, presented a suite of ominous, at times ardently (even stubbornly) hopeful parables about art in the withering context of contemporary life, his newest, Annette, is a return to old themes (which flicker as a presence within Motors, too) spanning his four decades of filmmaking. Addressing a yearning for romance in a world that leaves little room for stability or sincerity — artistic, emotional, or otherwise — Carax chases his localized but grand opera of a family life lived in show business with a quality movie musicals have always done well to embrace for the fact it's inescapable: their abiding sense of artifice.

The effect proves, especially for the film's first half, both absorbing and inviting. An L.A.-set satire on the entertainment complex with ample shades of A Star is Born and even New York, New York with its elaboration of modern lovers' perpendicular trajectories, the film finds standup comic Henry McHenry (Adam Driver) anxiously contemplating his relationship to opera singer Ann Desfranoux (Marion Cotillard). As their lives together converge into the space of a single, paparazzi-illumined spotlight, the Venn diagram of their careers seems to be shifting in directions both improbable and ominous, forming something like an eclipse. Henry's stage show, Ape of God, is beginning at the film's start a kind of spectacular decline. Dramatized in lengthy scenes Driver carries off terrifically before a packed and slavering house, the show serves as the film's most direct showcase of its self-questioning artistic themes. Meanwhile, Ann martyrs herself nightly onstage at the opera and finds her performances hailed with flowers and swooning reception night after night. In between shows, amid walks, motorcycle rides, and in bed together in both credible and telling sex scenes, the pair find some space for harmony. Throughout, the tabloids cover their romance in a cast which Annette less than refutes: as a restaging of Beauty and the Beast.

Because Annette is a musical, Henry's show — like Ann's — is sung, with his mordant, irritable prodding of his audience providing a fairly gendered counter to her embrace, at least onstage, of the abstract, the ethereal, the sincere. Carax, who now moves between self-aware takes on genre with the same sense of ease and purpose a camera operator deploys in swapping lenses, finds Annette's raison d'être-as a rock opera, as a musical, in the tensions within the public and private life they're attempting to share, both as artists and human beings. While pressing toward a full-throated embrace of its tale of love and (eventually) family, the film at the same time accompanies its own wary, almost panic-stricken progression with a potent aura of existential doubt.

Here, that's driven not just by Carax's voice or by his searing, riotous assaults on all manner of spectatorship (including the justice system) — but by that of the duo Sparks, who contribute something like it through their contributions to the film's music. With their pop-sardonic, mantra-like stylings, their work here finely complements Carax's own tendencies toward self-inquiry, at once underlining and undermining Annette's sentiments throughout in their insistent repetition, itself a reflection of the practice and rehearsal processes which go into stagecraft, filmmaking, and most any performed art. There are peaks and there are valleys to it all — but embedded as they are in processes of repetition and grinding commerce, how much gravity can they really have?

This sense of alienation, of either perceptive or blinkered existentialism on the film's and Henry's part, finds its summit in Annette's strangest gesture, which sees this sense of falsity invade the couple's future and their home. When Ann's daughter, Annette, eventually is born, she takes the form of an animated doll-like puppet onscreen rather than that of a performer or human child. This eerie outcome goes unacknowledged by the characters, though the largely silent girl invites a sense of both mystery and queasy comedy, shading each loving or coddling parental gesture with a sense of unreality. While babies and children often provide narrative signposts of the future ahead, Annette's physical presence stands as a towering question-mark, begging existential questions about the future as much as Henry and Ann's relationship itself. Is Annette, as a product of participants in an often callous industry, doomed to be a kind of fraud? She serves as a reminder onscreen, too, of the thin line in art between works, or performances, that are full and living and those which feel emptily deployed, and basically dead.

As a film devoted both to capturing and resisting a variegated range of existential modern struggles, Annette is a film whose odds, whose future even, can feel arrayed against it. Documenting its concerns through a mix of bold comedy — with audiences who laugh less on provocation than on command — and flattened emotional affect, Annette's characters struggle to express themselves even in song, a space in which musicals tend to frame expression as easy to pour out — despite all the work and labor in it. What, Annette seems to ask even as it struggles toward some full expression, is all this labor for?

The film's gothically ominous symbols of cool modernity — its limousines, yachts, motorbikes and mansions — less limit the film's scope to the preoccupations of the landed rich than provide an opportunity to examine the reach of the malaise it addresses (while also questioning the fruits of class- and career-based striving). Existentialism can feel time-tested, tired even — but for Carax, the proof is in many ways baked-in here; the filmmaking, like any art worth having or holding onto, creates its own best case. From the urban nighttime scenes, which refract his singers' street-lit backdrop into a field of jewels, to the fragile, eccentric visions presented in the film's sparsely scattered and late-appearing digital effects, the strongest case for hope within Annette lies in Carax's fully-felt technique in making it. While gilding nothing, Annette presents a world that's alluring, honestly depicted, inquisitive, and cutting, owning up to what most should feel now as an omnipresent existential pull. While rare and welcome, perhaps better still is that Annette never pretends to bravery, documenting nothing so heavily as its struggle to make old questions new.