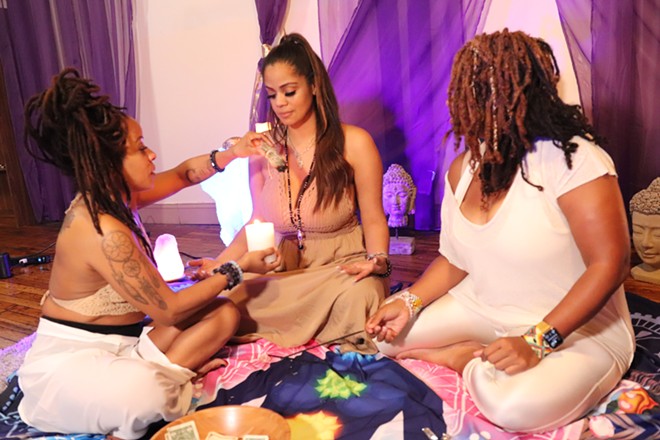 If you’ve been looking for a chance to experiment with the “magic mushroom” psilocybin, say no more. A trio of Detroit spiritual healers and plant-based lifestyle teachers is planning a psilocybin weekend retreat in the city for March 2022.

The “Healing Code Psilocybin Weekend Retreat” isn’t just a place to chill out as you go on a psychedelic, interdimensional escapade — it’s a ceremony for attendees to use the mushroom as medicine to move past trauma and other vices.

Over the course of three days from March 18-20, participants will be taken on a journey that includes psilocybin, meditation, gong healing sessions, reiki, yoga, and intention-setting, all while eating a vegan diet.

Amanda Elise, a certified reiki healer and one of the retreat’s hosts, says psilocybin helped cure her depression.

“My first experience with it was in Bali in 2019 and I had such a dramatic shift on every level. I was able to get off antidepressants and live such a happy, joyful life. This is something that I want to offer to people to help them heal some of the blocked and traumatic energies they have,” she says.

Another one of the retreat hosts, celebrity vegan chef Princella Zeno, was reconnected with her estranged mother after her first experience taking psilocybin before an ayahuasca ceremony. During the ceremony, she heard a voice say “call your mother,” which she did. They were able to repair their relationship after eight years of not speaking to each other, and her mother passed away two weeks later.

Sounds freaky, but it’s not out of the ordinary. Many people report having similar experiences of the medicine delivering them life-altering messages.

The group was originally planning to host the retreat elsewhere until Detroiters voted to decriminalize entheogenic plants, including psilocybin, in November. Now, they’re in the process of securing a venue in Detroit.

While decriminalization doesn’t technically mean psilocybin is legal, it does mean that the city no longer prioritizes arrests for the use and possession of it and other naturally occurring psychedelics like peyote, ayahuasca, DMT, and mescaline.

Psilocybin isn’t the only substance being offered at the retreat either. Attendees can also experience Kambo — an alternative medicine made from the secretion of tree frogs that originated amongst indigenous peoples in the Amazon. Instead of being ingested, Kambo ceremony participants receive small burns on their legs or arms where the frog secretion is then applied.

Elise, who is a native Detroiter who splits her time between Detroit and Atlanta, is certified to administer Kambo ceremonies in the United States. While it has been criticized as pseudoscience, not to mention controversial as the frogs have to be under extreme stress to release the secretion, Elise says it can cure anxiety and even addiction.

“When I did my training to administer Kambo in 2017, I met one person who was addicted to meth and another who was suffering from Lyme disease. The Kambo helped heal them from both of those,” she says. “Kambo is purging. At the retreat, you’ll do psilocybin and then take Kambo to release whatever insights and negativity you receive during the mushroom ceremony.”

Yes, purging as in vomiting. Sound like a bunch of hippie stuff? To the haters and skeptics, Lisa Hillary Johnson, a Detroit yoga teacher and another retreat host, says “this ain’t no bullshit.”

“I’ve been living a plant-based lifestyle for the past 20 years. Plants helped cure my anxiety and panic attacks and mushrooms are just another plant. Plants heal and there’s just no question about it. Mushrooms take energy and recycle it into the soil, so if they can do that to the earth, imagine what they can do for you on a cellular level,” she says.

For the curious, brave, and unconvinced, the group will be answering questions on Instagram live at 6 p.m. on Sunday, Dec. 19.

The retreat costs $1,497 for general admission, which includes the psilocybin and Kambo ceremonies. There is also a VIP option that offers a medicinal cacao ceremony and extra gifts in addition to everything else. More information can be found on detroitheals.com.