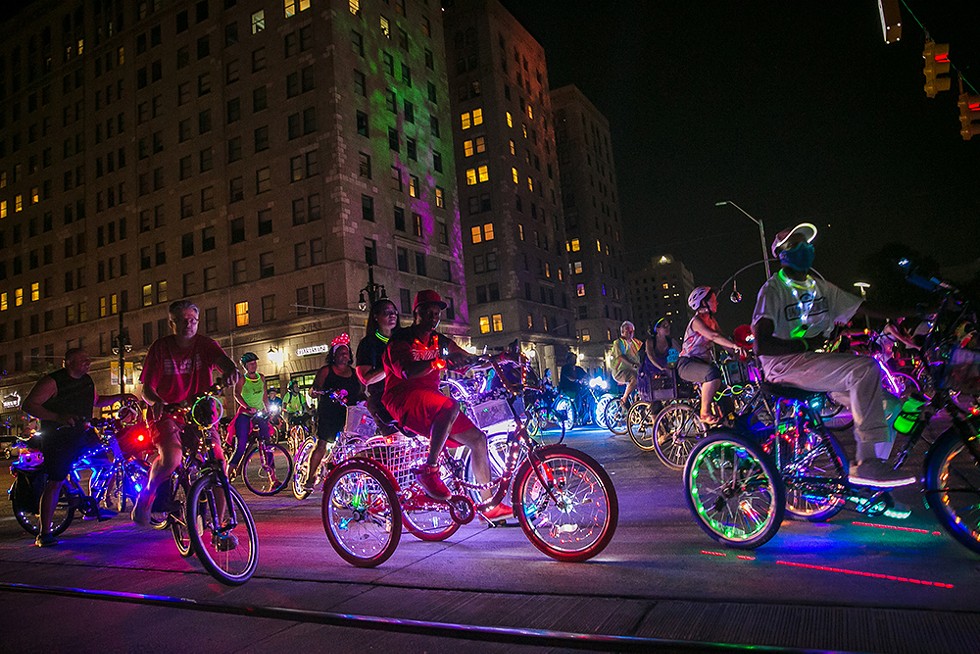 Courtesy photo
After a hiatus, Detroit’s Dlectricity festival and Light Bike Parade is rolling back into town.

It's been quite some time since we last saw Dlectricty, Detroit's biennial-ish festival of eye-popping light-based art installations. First launched in 2012, the fest returned in 2014, but the 2016 edition was postponed by the construction of the QLine streetcar. Then a plan to return in 2020 was scrapped due to the pandemic.

But this year, the festival is back. Borucki says officials adapted to the pandemic by spreading the installations out to allow for social distancing and encouraging all festivalgoers to wear masks, regardless of vaccination status. The fest will even offer free COVID-19 vaccinations.

It could be the start of a new rhythm for the festival. "You know, there doesn't really seem to be a whole lot of rhyme or reason between these years," Annmarie Borucki, director of arts and culture at Midtown Detroit, Inc., tells Metro Times. "It could change over time, but I think because of the amount of time and the amount of money it costs to do this, it really will either be a biennial or triennial moving forward."

Borucki says this year's festival is meant to highlight Detroit's Cultural Center district, a more focused footprint than the fest's previous years. The district is bounded by Kirby Street to the north and Warren Avenue to the south, and flanked by Brush Street on the east and Cass Avenue on the west, encompassing many of Detroit's major cultural institutions, including the Detroit Institute of Arts, the Detroit Public Library, the Charles H. Wright Museum of African American History, the Michigan Science Center, and the Detroit Historical Museum, among others.

"I think more than anything, you know, we are stronger working as a district," Borucki says, pointing out that the institutions banded together in July 2020 to come up with a joint pandemic reopening plan. "We shared all of our resources to put together a plan so that we could have a similar visitor experience from institution to institution, and incorporated similar public health protocols. In fact, we were the first district to require masks before the state mandated that. You get strength in numbers by working together."

This year's festival is also meant to highlight a new initiative to reimagine the future of the district. In 2018, the DIA and Midtown Detroit, Inc. announced a design competition for proposals to integrate the existing institutions into a more cohesive, walkable campus. Out of 44 applicant teams, eight were selected to interview in Detroit, and three finalists were invited to submit a formal proposal. Announced in August, 2018, the winning design team was made up of design firms from Detroit, the University of Michigan, and Paris.

Dubbed the "Detroit Square," the winning design is part of what is now known as the Cultural Center Planning Initiative, which calls for linking the institutions in a plaza-like campus, buffered by green space and a walkable trail dubbed "the Necklace" that would link a variety of smaller spaces that could be activated for public programming. The plan even calls for narrowing Woodward Avenue, though Borucki says whether that happens or not is still up in the air. It's perhaps not too far-fetched, given the creation of the downtown Spirit of Detroit Plaza at Woodward and Jefferson Avenue.

"We want the Cultural Center to feel different than the riverfront, or downtown," Borucki says. "And one of the things that we've heard repeatedly from people is that they want to have all different types of spaces — beautiful spaces, spaces for reflection, and quiet space, like if people just want to go walking around the district and getting their exercise when they're on their lunch hour, things like that."

It's a bit of a throwback to a name that used to be used for the area. Back in the '70s, Midtown Detroit, Inc.'s predecessor organization was known as the University Cultural Center Association. "At that time, we were that kind of governing entity for what was considered the Cultural Center," she says. "The problem was that the institutions never really worked together to brand it and keep that going over decade after decade. And now that's what we're trying to do, is go back to that, because it makes sense."

She adds, "It's funny, I'll tell you all the community engagement work that we've been doing around the city with neighborhood groups, just everyday residents, churches, whatever, everyone's like, 'Wow, I didn't even know we had a Cultural Center!'" 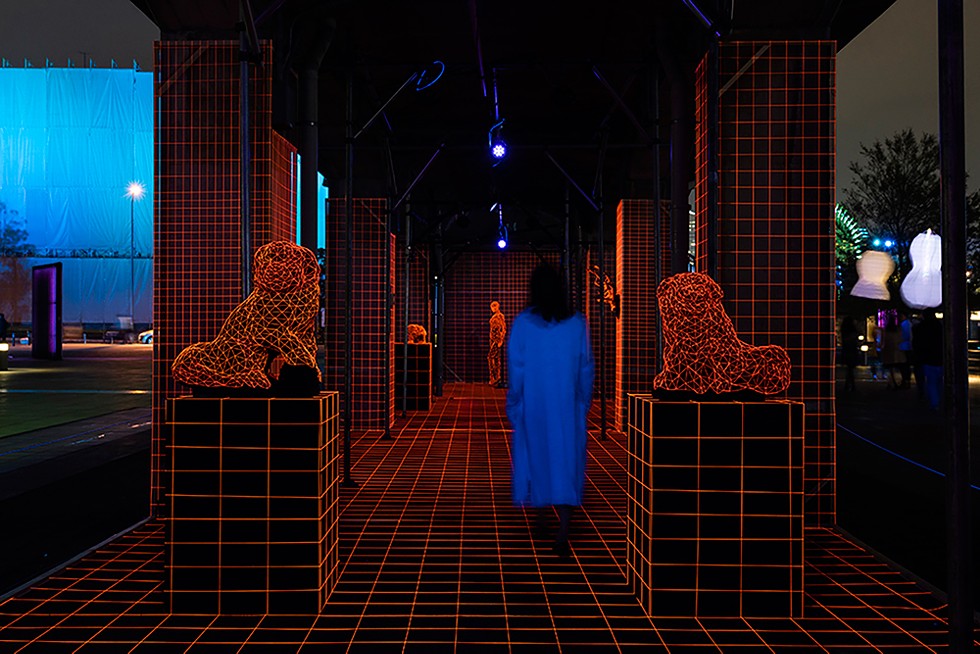 Borucki says the proposal would complement a master plan for a reimagined campus for Wayne State University, and the two plans would share various design elements for a more cohesive whole. Some of Dlectricy's programming extends onto WSU's campus, including a Tron-like installation in WSU's Prentis Building by the Japanese artist Takatuki Mori, which covers an ultraviolet-lit space with a grid, making it look like you're walking into a virtual reality space.

Previous versions of the festival extended as far south as Mack Avenue and to the Detroit Symphony Orchestra. "I have to tell you, you know, this is the car capital," she says. "It's hard to get people to walk from the DIA to the DSO. For us, for the amount of investment that it takes to instill will to get people to go from the DIA down to the DSO, it's a very difficult thing to do, especially when we also have been in flux with a number of buildings that have been under development. We feel even though this is a smaller footprint, it's actually more walkable than ever."

This year's festival does include a satellite footprint at DTE Energy's Beacon Park and Circle (the DTE Energy Foundation is a presenting sponsor), with some additional performance-based programming. That includes a a performance by Detroit-based artists Kesswa and Shigeto on Friday, and dance party homage to Detroit's legendary WGPR-TV's dance show The Scene on both nights, which has the blessing of the show's host Nat Morris and will feature DJs like Ron OJ, Tony Peoples, Hump the Grinder, DJ Mr. Entertainment, Gary Chandler, and others. The dance party will also be livestreamed online, so people can watch it at home just like The Scene.

"Everyone I talked to loves that show," Borucki says. "The younger generations keep finding it [on YouTube]."

In all, Dlectricty will have more than 40 installations from artists from Detroit and beyond. The largest is a video mapping projection on the Charles H. Wright Museum by New D Media, inspired by the music of jazz great Charlie Parker. Another video mapping projection by the French artist Yann Nguema will be projected onto the DIA, incorporating objects from the DIA's collection.

The festival's longstanding tradition, the Light Bike Parade, will return Saturday. People can register on dlectricity.com to sign up for a free light kit to illuminate their bike, available on a first-come, first-served basis for pickup from Traffic Jam & Snug.

Beyond Dlectricty, Borucki says Midtown Detroit, Inc. is moving toward making other aspects of the Cultural Center Planning Initiative a reality, the first being reviving the DIA's underground parking structure, which is in need of repairs and has been closed for years. If they can relocate the museum's surface parking lot on John R Road to also be underground, they could build a green space above it. That would be the first step in bringing the proposal's verdant campus to life. Borucki says the idea is to also start bringing more outdoor programming to the district at a more regular cadence.

But for now, it starts with the return of Dlectricity.

"I think all around the fact that we're bringing this back after being stuck in what felt like an arts and cultural depression for all of last year, it's good to finally have something to bring people back out to," she says. "So we're really excited about that."

Dlectricty returns from 7 p.m.-midnight on Friday, Sept. 24 and Saturday, 25 in Detroit's Midtown area and Beacon Park. See dlectricity.com for the full schedule and map. The event is free and open to all ages.