'Terminator: Dark Fate' purrs along, part of a machine unlikely to ever die 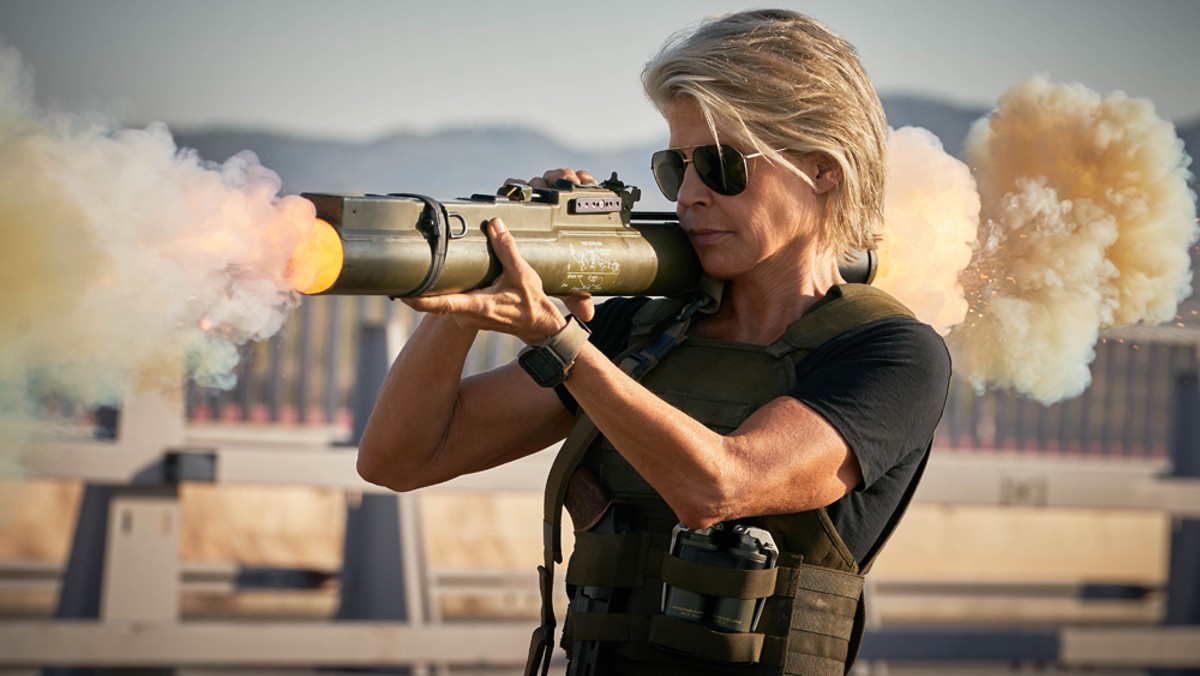 Linda Hamilton stars in Terminator: Dark Fate. Kerry Brown, Paramount Pictures
Though an admirably solid work of Hollywood filmmaking, Terminator: Dark Fate can’t match the style, wit, or heft of its best predecessors — but was anyone expecting it to? An update to the Terminator franchise that (canonically) erases the other sequels made since 1994’s T2, Dark Fate manages to be both part of a franchise and a work with more than a little of its own voice.

That voice is more audible politically than aesthetically; the besoiled, grungy splendor of the other Terminator films is mostly absent, replaced by capable if not transcendent action choreography, dusty roadside landscapes interspersed with industrial interiors, and an approach to scripting that’s sufficient and fairly clever. Since movies are made from a sum of their parts, Dark Fate’s mostly adequate pieces seem to materialize in a way that manages to be satisfying: one of the mysteries of the form. Like last year’s Halloween, which also brought back its franchise’s foundational leading woman, Dark Fate’s re-deployment of Linda Hamilton as Sarah Connor allows her to carry much of the film’s load, salvaging emotional resonance, history, and memories of a long-past life from her previous films. Her grit, carriage, and sparky affect helped change how women behave on-screen just as director (and her former spouse) James Cameron altered the nature of action films. But as she appears here, Hamilton seems to be more at service of the script than in possession of the movie’s story, spouting one-liners that seem engineered to underline her character’s toughness.

Part of the trouble may be that the movie leaves her largely without an anchor. In a flashback that takes place around the opening credits, her son’s gunned down before her eyes; the culprit is a T-800, creating an entry for Arnold Schwarzenegger to revisit the franchise. Welcome though that is, Sarah’s character is cast adrift, enacting a barely-motivated biannual mission of vengeance in which she terminates Terminators as they appear. Though much could be made of the way grief numbs (it’s briefly mentioned she’s turned to drink) and renders her a violent machine, this subtext is basically overlooked in favor of the movie’s broad, apocalyptic plotline. Its story is at once an echo and a kind of revision, not unlike the new Terminator model. Grace (Mackenzie Davis), an “augmented” human with enhanced capabilities, is sent back to safeguard Dani (Natalia Reyes), a Mexico City native humanity’s fate somehow depends on, from a shapeshifting, self-duplicating Terminator sent back in time (played by Gabriel Luna). The result is a series of chase scenes, fights in industrial settings, respites in dingy hamlets, and gradual relationship-building. It doesn’t take long for Sarah to join up with the pair; the trio of women, alternating between fight, flight, and sparring with one another, serve as the focus of the film.

In this lies the movie’s politics. To its credit, Dark Fate doesn’t pretend to be apolitical, nor does it cry out its politics in expectation. Instead, it presents three tough women casually and integrates a point of view into its story. Though a few male characters appear, they’re dispensed with as easily as worn-out garments. The good ones are weak or victims, the bad pitiable and immoral; a fair-play inversion of how women are so often depicted onscreen.

The film’s only potent men are themselves in fact weapons, not human men at all, and so prone to being used in any number of ways. As was always the subtext in Terminator, these creatures are brutes, emotionally stunted killing machines — and subtextually curious for the thinness of their displays of “soft” humanity, which exist only as a kind of fleshy veneer. When Schwarzenegger’s T-800 appears, he’s attempted to reform, to help others, and to live with some sense of purpose. He serves, too, as a nihilistic observing voice, passively remarking on humanity’s weakness and tendency toward self-destruction. Though speaking in a flat affect, his existence on the sidelines feels oddly poignant here. It’s a sorry, uphill battle to try to get humanity to help themselves — a motive and a struggle more convincingly elaborated on than Sarah’s vengeful streak of grieving, which it’s a bit hard to believe would persist over as long a time as it has. Though the film ardently attempts to center women, Schwarzenegger’s character’s being and manner still lie close to the story’s core.

Speaking after the movie with a friend about the franchise, he described Terminator (as a brand) as “a fantasy of individuals standing up to the machine.” In this, as in Mad Max: Fury Road, the film’s makers trust chiefly in women to be the ones who stand up, ostensibly with the understanding that men have erred — and had their chance. Though put together well, Dark Fate’s script sees, positions, and acknowledges its lead actresses, depicting trauma and strain without really living with and inhabiting it; its male directors and producers may be some part of this. In James Cameron’s Terminator films, the story felt less busy, more strongly honed and focused. A space was made for exploring personal trauma, romance, and paranoid visions of future hellscapes all within a broader fantasy of control. Lacking room for these in its careful maneuvering, Dark Fate still purrs along, part of a machine unlikely to ever die.