Send a News Tip
It's summertime and that means we finally have to cash in on the old line we kept telling ourselves: "There's so much I want to read, but I'll wait until the summer." You probably already have a lot on your plate, but why not load it up just a bit more? If you're interested in regional literature (or works written by people from the region), here are some suggestions of books by authors from Detroit to the Upper Peninsula.

After being priced out of their Brooklyn neighborhood, journalist Amy Haimerl and her husband use their savings to buy an abandoned house in Detroit for $35,000. When they arrive, the 1914 Georgian Revival has no plumbing, heat, or electricity. With charming anecdotes, Haimerl writes about the joys and difficulties of making a home in a city whose future is hard to determine. If you’re into urban memoirs, give this one a look.

Author Christopher McCormick, who lives in Ann Arbor, sets his debut novel in the land of his childhood: California’s Antelope Valley. The book is a series of stories that center on a character named Daley Kushner, his life in San Francisco, and the interesting people that surround him: an alfalfa farmer, a black politician and former confederate mascot, Daley’s Armenian mother, and his childhood friend Robert Karinger. It’s a good, ol’ fashioned bildungsroman that also explores what it’s like for a small town to grow into a sprawling city.

Sharp Blue Search of Flame is a poetry collection that reflects the author’s experience living among Eastern and Western cultures, as well as her Jewish Indian roots. She uses free verse and other forms to explore real and imaginary landscapes in India and the United States. It’s a dark collection that broaches difficult subjects (e.g. infanticide, bride burnings, etc.), but that’s no reason to turn away from them. Joseph currently teaches creative writing in Ann Arbor and is an independent editor and manuscript coach.

Know the Mother by Desiree Cooper
click to enlarge

Desiree Cooper keeps catching fire. She’s a former attorney, Pulitzer Prize-nominated journalist, a Detroit community activist, and a former Metro Times editor. After being named a 2015 Kresge Artist Fellow, she's come out with Know the Mother, a short story collection that celebrates and examines the archetype of the mother through  the lenses of race and gender. It’s a book inhabited by women – black and white – who try to understand their roles as daughters, sisters, grandmothers, and wives. You know, humans.

Rolling Stone journalist and native Detroiter Mark Binelli received much-deserved attention for his 2013 book Detroit City is the Place to Be. With his second novel, Binelli turns his attention to the mythically eccentric R&B musician Screamin’ Jay Hawkins (“I Put a Spell on You” was his only hit). Hawkins was the kind of guy who came onstage in a coffin, carried a staff with a human skull on top, and made wild claims of joining the Army at 14 and fathering 75 illegitimate children. Screamin’ Jay Hawkins’ All-Time Greatest Hits is an anomaly. How to define it? A fantastical unauthorized anti-biography? Read it for yourself and come up with a suitable category.

Love That Boy: What Two Presidents, Eight Road Trips, and My Son Taught Me About a Parent’s Expectations by Ron Fournier
Harmony, April 2016

In Love That Boy, Ron Fournier, a respected political journalist for the National Journal, recounts his journey to love and accept his son Tyler, who has Asperger's syndrome. Fournier had grown up in Detroit bonding with his father over sports. He'd hoped to do the same with Tyler, but when it became clear that Tyler's interests and sensibilities were very different, Fournier had to learn that the expectations of parenthood rarely align with reality. It's a beautiful story that could be especially revealing for parents.

I Want to be Once by M.L. Liebler
click to enlarge

It's a fruitful year for M.L. Liebler. In addition to co-editing a delightful collection of stories by Michigan authors (Bob Seger's House and Other  Stories, WSU Press, May 2016), he also published his most recent book of poetry. I Want to be Once melds autobiography, satire, journalistic commentary, and poetic invention to give readers insight into the author's personal life and a kind of truncated history of American media. We're shown a man who is the product of working-class 1960s America and who would go on to work in Afghanistan for the U.S. State Department. A humorous and emotionally honest book.

L.E. Kimball, an assistant professor at Northern Michigan University, gives us a collection of non-linear stories set in the Upper Peninsula that follow the lives of a mother, daughter, and granddaughter. Playing with time and perspective, the grandmother's two-room cabin serves as the uniting element amid a series of ephemeral, dark memories. 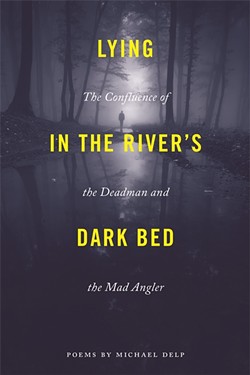 Photo courtesy of Wayne State University Press
Lying in the River’s Dark Bed: The Confluence of the Deadman and the Mad Angler by Michael Delp
WSU, April 2016

Michael Delp - the other co-editor of Bob Seger's House and a  resident of Interlochen - is a sizable poetry collection featuring the two titular characters: Deadman and the Mad Angler. The Deadman is a mischievous demon, a lofty philosopher of the inner lives of humans. Meanwhile, the Mad Angler is something of an exotic shaman and environmentalist. This is a humorous, provocative collection of persona writing and conversational poetry that may appeal to those who enjoy the surreal.

The Cherokee Rose: A Novel of Gardens and Ghosts by Tiya Miles
John F. Blair, April 2015

Yamasaki in Detroit: A Search for Serenity by John Gallagher
WSU Press, September 2015

simulacra by Airea D. Matthews
Yale University Press, 2017 (Keep an eye out for it!)