Screengrab, City of Sterling Heights YouTube
A tile featuring the controversial 'Punisher' logo, which has become co-opted by white supremacy and hate groups.

The city of Sterling Heights has agreed to remove a ceramic tile that featured the controversial "Punisher" icon from a public art project, made by the Detroit Institute of Arts for its police department, after the unveiling of the work was met with a wave of criticism.

That's according to an email sent by DIA leadership to its staff Wednesday that was obtained by Metro Times.

"Included among the tiles was an image that was particularly offensive to many in our community," the email reads. "Had we been aware of its symbolism, recently appropriated by white supremacist groups, we would have absolutely disallowed it. We unequivocally oppose the inclusion of this symbol. The City of Sterling Heights has removed the tile and it will be replaced."

The Punisher logo is gleaned from a Marvel comics vigilante antihero. The symbol has been adopted by police and military supporters in recent years — something the character's creator, Gerry Conway, has denounced.

"The Punisher is representative of the failure of law and order to address the concerns of people who feel abandoned by the legal system," Conway told Forbes, adding, "It always struck me as stupid and ironic that members of the police are embracing what is fundamentally an outlaw symbol."

Others have pointed out that the logo resembles Nazi iconography. The tile in the DIA project also included a "Thin Blue Line," another symbol that is fraught with controversy.

The artwork, which was unveiled last week, was created through a partnership between the DIA and the Sterling Heights Police Department. It was a product of the DIA's Partners In Public Art Project (PiPA), in which the museum helps create public works of art for the communities that support it with a voter-approved millage tax. Titled "To Serve and Protect," the artwork features a reproduction of a painting depicting officers holding their hands in prayer against the backdrop of an American flag, above rows of tiles created by Sterling Heights police officers and their families.

The creation of the tiles was helmed by the museum's Vito Valdez, while Detroit artist Nicole Macdonald created the painting. For her part, Macdonald has divorced herself from the project, saying it was a "bad assignment" and that she regrets doing it. The painting was originally created in 2018 with feedback from the police department, before the growing movements for Black lives and calls for police reform exploded into the mainstream as they have following the 2020 murder of George Floyd by Minneapolis police.

"I was trying to send a message of humility and reform to the police department," Macdonald previously told Metro Times. "If that wasn't executed in and of itself … If a picture of the police reads as police brutality, then it should come down." 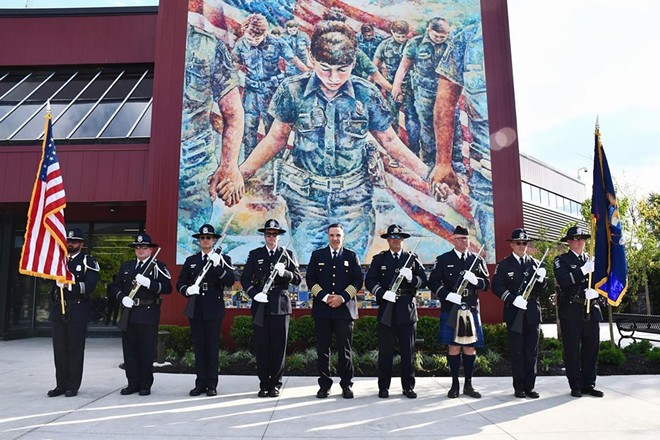 Courtesy of Instagram, @cityofsterlingheights
The Detroit Institute of Arts received backlash after debuting a public artwork for the Sterling Heights Police Department that critics say reads as "pro-cop" propaganda.

In its email, the DIA leadership admitted to a flawed design process for the project.

"As a leadership team, we know that there were many failures and mistakes in this process," they wrote. "We deeply apologize to all of you, and commit to doing better in the immediate future and moving forward. As an initial step, we will establish a structured PROJECT REVIEW PROCESS that will include feedback and input from staff that represent diverse backgrounds, departments, and perspectives in order to ensure projects not only reflect individual communities’ priorities but also meet the needs of our global community."

The email was signed by the museum's director Salvador Salort-Pons, among others. It also pointed out that the museum is undergoing an Inclusion, Diversity, Equity, and Accessibility (IDEA) project helmed by Chicago-based public relations firm Kaleidoscope Group to help it with diversity issues.

"We are grateful that we have begun the deeply intentional and thoughtful work with our IDEA initiative, which is more important now than ever," the leadership team wrote.

"We hope that you will accept our apologies," they added.

Despite the outcry, Sterling Heights city officials said they will not remove the rest of the "To Serve and Protect" project, according to the Macomb Daily.

"Not only does public art enhance quality of life in a community, it also provides a method to break down barriers, provoke thought, and create important community conversations," city officials said Wednesday in a statement.

"The time has never been better to spark conversations around continuous improvement and promote a message of peace, love, unity, kindness, and humility in service to our community, and we look forward to continuing to promote that message — through both this art and in our actions — for years to come."